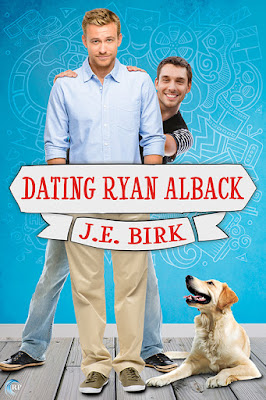 Ryan Alback has almost everything he’s ever wanted: a successful acting career, a dog who adores him, great family and friends, and a life outside the closet. The only thing missing is a boyfriend—but Ryan’s been burned by Hollywood relationships before, and he’s not eager to try one again.

Jason Santos has almost everything he's ever wanted: a fulfilling career teaching middle school, a house in a city he loves, and parents who support him in every way. Too bad he can't seem to forget the ex-boyfriend who rejected his marriage proposal.

When a talk show host launches a dating contest to find Ryan a boyfriend and Jason accidentally wins, neither of them expect anything to come from it. Yet somewhere between a disastrous massage and a mud sinkhole, they both start to wonder if this date could be more than just a public relations stunt. But before they can move into the future, they'll both have to learn to let go of the past.

I’m not gonna lie: I used to have serious attitude about NaNoWriMo. I never participated in it, and I never understood how people did. A novel in a month?! As Eddie Izzard says, who can live at that speed?! Not to mention that at one time I did most of my writing in large binges on Saturday afternoons, thanks to my work schedule, so trying to do a binge of that magnitude every day for 30 days seemed almost masochistic in nature.

But a lot of writer friends told me how great NaNo was for things like their discipline and writing stamina and blah blah blah you get the idea. Then November came along a few years ago and I happened to have an outline finished for Dating Ryan Alback. Why not? I figured. Let’s see what all the fuss was about.

Okay, I admit it. I was quickly converted.


NaNo is great for your writing stamina and discipline and all those other things people say it’s good for. It is, as it turns out, great for your creative flow and getting your writing mojo running again. Since writing Dating Ryan Alback, I have now participated in NaNo several times—only not usually in November. Now trying to write a novel in a month is just something I just do whenever I feel stalled in my writing process or have a story on my brain I really want to work through without second-guessing myself.

I’ll forever love Dating Ryan Alback for being the book that concinved me NaNoWriMo wasn’t a completely crazy concept. It turns out people can live at that speed!

J.E. Birk has been telling stories since she could talk and writing them since she was introduced to the alphabet. She hails from Colorado, where you can usually find her skiing, training for a 5K she won’t end up running, or watching people run into each other on football fields and in hockey rinks. You can follow her ramblings on Twitter by looking for @jebirkwrites. She’s also been known to ramble on Facebook as J Elisabeth Birk.

To celebrate the release of Dating Ryan Alback, one lucky winner will receive a $10 Riptide Publishing credit and their choice of ebook from J.E.’s backlist! Leave a comment with your contact info to enter the contest. Entries close at midnight, Eastern time, on February 25, 2017. Contest is NOT restricted to U.S. entries. Thanks for following the tour, and don’t forget to leave your contact info!