My debut novel, Countermind, is a paranormal cyberpunk thriller set in Hong Kong, an amazing, fascinating, incredible city that I will never visit again, so help me God.
My first visit started off fine. A good airport should function like the starter town in an RPG: You should be able to learn all the skills necessary for survival before you first set foot outside. In the case of Hong Kong International, that meant learning how to:
Figure this much out, and no matter how lost and hungry you get, you can still walk into a 7-11 and use that card to get a crappy egg sandwich.
That brings me to survival tip #2: Fellow Americans should find their closest 7-11, Starbucks, and Pizza Hut. They will be vital cultural touchstones when you find yourself disoriented after your journey to the literal other side of the world. Lucky for me, my hostel had one of each within a few blocks.
The hostel was in Kowloon. The bus from the airport dropped me off on Nathan Road, after sunset. Reader, I may be from the suburbs, but I am not completely uncultured. That said, I have never in my life been so immediately overwhelmed by a place as I was when I stepped off that bus. It wasn’t just the hawkers, who zoomed in with deals on suits, or “good copy” watches, or a cheap room in a nearby guesthouse. It was the flowing, churning mass of people. They weren’t rude. They weren’t polite. They were just always, always in a hurry. And they were everywhere. Never in my life had I been to a city so dense, so noisy, so crowded. As soon as I arrived, I wanted to turn around, go straight back to the airport, and board a flight home to my fiancé, and then move us both someplace out in the sticks to raise a couple of kids.
Basically, I had a reverse mid-life crisis. Matters were not helped when, my first night in the hostel, a fellow American came back drunk from a night on the town and peed on the floor.
I guess the point I’m trying to make is that I don’t have any romantic notions about Hong Kong. I don’t want to live there. If anything, it left me wanting to live someplace as un-Hong Kong as possible. Which begets a pretty obvious question: Why set a novel there?
Honestly, the choice was a little arbitrary, and maybe even reckless. Cyberpunk is characterized by its hyperdense metropoles and blending of eastern and western cultures, so Hong Kong seemed like the perfect place to set this weird little book.
But it’s not about Hong Kong. Not entirely, anyway. That’s not my story to tell. This story’s about Alan Izaki, a fugitive psychic, hacker, and petty thief, trying to avoid the notice of a government that tracks, registers, and regulates telepaths. And it’s about Jack Smith, agent of Countermind, trained in a classified school of counterpsychic techniques. It was inevitable that they would cross paths, one humid night, when Alan Izaki was picking the lock on a safe in a pawn shop, and Jack Smith, watching from nearby, sprang his trap.
Countermind is about psychics and hackers and spies, and government conspiracies and video games and quantum physics, and that’s all before things really start to get weird. But really it’s about Alan and Smith, and that fateful first confrontation, and all the crazy, scary stuff that happens afterwards. And maybe it’s a little bit about Hong Kong, but not much, and that’s okay, because I’m never going back.


(Until it’s time to write the sequel, anyway.) 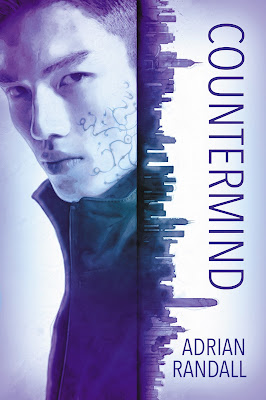 In a postprivacy future, secrets are illegal and all communication is supervised. Telepaths are registered and recruited by a government with no qualms about invading the minds of its citizens. Fugitive psychics are hunted by the Bureau of Counterpsychic Affairs, or Countermind.

Alan Izaki is one such fugitive, as well as a hacker, grifter, and thief.

Countermind agent Jack Smith is hunting him through the twisted underbelly of Hong Kong.

But Alan possesses a secret so dangerous and profound it will not only shake Smith’s loyalties, but the foundations of their society.

And Alan isn’t the only one on the run. Rogue psychic Arissa binti Noor escapes Countermind, in search of brilliant game designer Feng Huang. She hopes that together, they can destroy the government’s intrusive Senex monitoring system.

Their goals seem at odds, and their lives are destined to collide. When they do, three very different people must question their alliances and their future, because everything is about to change.


It was past midnight, and some parts of Hong Kong actually did sleep at this hour. The pawnshop was near Kwai Chung, its customer base mostly local workers pawning valuables just to squander their money on the races, men who wouldn’t have the resources to track down the goods they’d put up as collateral. Alan had chosen the shop for its proximity to a body of water, and it was just a minute’s hard sprint to the nearest container yard, then through that to the channel.
Alan charged downhill on roads still slick from the afternoon’s rain, gleaming with the reflected glow of the city. No neon signs or electronic billboards, just streetlamps and a few lit office windows. Droplets ran in steady trickling streams off the buildings, canopies, streetlights, AC units. Steel shutters of closed storefronts shimmered wet, and Alan’s skin glistened in the damp air. He didn’t hear any pursuing footsteps, didn’t bother turning his head to check.
He’d only gotten a brief glimpse of the attacker in the pawnshop, but that had been plenty. The man looked just a few years older than Alan, Eurasian, tall and lean, hale, clean-cut, clean-shaven. His attire had been dark but utterly nondescript. There was an impression of a black suit jacket, black slacks, and a black button-down shirt (but no tie, and open at the neck). Alan hadn’t the time for more lingering impressions, but the man would’ve been attractive under more civil circumstances.
The man wasn’t the shop owner, and was too well-dressed to be another crook or a triad member. That probably meant law enforcement, ample reason for Alan to make the quickest possible escape without sparing even a backward glance.
Alan vaulted from the sidewalk over a steel railing, dashed across the street, leapt another rail, and charged down a covered stairway, letting gravity lead his charge toward the water, angling toward the red lights atop the cargo-loading cranes just visible over a row of gently swaying palm trees. He hit the next street with such speed he lost some momentum to a brief stumble. A red-and-silver taxicab blared its horn at him, and Alan ducked under the canopy of a shuttered dim-sum shop to get his bearings. He glanced up at the building corners in the nearest intersection and spotted the closed-circuit cameras. He couldn’t see which way they pivoted in their housings, but didn’t think they’d have a clear look at him where he stood. Just to be safe, he’d have to circle around, keeping shy of major streets if he was to stay clear of any more traffic cams, though his pursuer couldn’t be far behind.
Or was it pursuers? The man had attacked Alan alone, not a standard practice for an officer of one of the world’s most famous police forces. If he was a government agent, he had to know what Alan was, right? And what such agent would be so reckless as to challenge a rogue telepath completely solo? Alan doubted even a state psychic would risk such a confrontation, and this man had given no sign of being a psychic himself, had not attempted any telepathic attacks, relying entirely on physical force. Who was he?
Whatever he was, if he caught Alan, it would mean death or worse. He had no need to know who this man was, only to escape him.
Alan pulled his jacket tight around him and popped the collar up. He turned a corner for a side street with fewer cameras and fewer lights and strolled a leisurely path into the shadow of an elevated highway, traffic rumbling above him. From there, he made his way through a hole in a chain-link fence he’d prepared earlier tonight with the help of his bolt cutters, slipping into the container yard, and then he sprinted across the yard toward freedom.
He ran straight into the agent.
The man stepped around the corner of a container and flashed Alan a razor smile as he kneed him in the stomach, allowing Alan’s own momentum to double him over. Then the man threw Alan into the side of the steel container with a clang that echoed inside his head as his arm was twisted behind his back. Alan was strong for his size, but the agent was using some sort of judo leverage shit. Alan tried to wrench free, nearly succeeded, and then the man compensated for his strength by spinning him into the side of another container.
The man tightened his hold and hissed into Alan’s ear.
“How many counts of resisting arrest?”

Alan gasped, gulped, and tried to talk his way out, forcing the words. “Come on, man. You never said you were arresting me.”
“I thought it was implied. You did flee.”
“After you shot me!”
“With a government-issue ranged electroshock device. Pay attention.”
The agent tripped Alan roughly to the ground and buried his knees in Alan’s back. His hand forced Alan’s face against the concrete, and Alan wheezed as the air was squeezed out of his lungs.
Alan screwed his eyes to the edges of their sockets, trying to see up through the corner of his eye. The light of a passing ship winked between the container towers and slid over the man’s features: dark eyed, dark haired, darkly smiling.
“Resist some more,” the agent said. “I don’t need to excuse brutality, but it helps with the paperwork.”
Alan realized—a bit belatedly and with scant sense of relief—that he was now very much in danger of physical harm.
He expanded his thoughts outward and upward, seeking out the luminescent glow of his assailant’s mind as if reaching for a firefly in the night. He found it, wrapped telepathic fingers around it, and squeezed tight.
There you are, Alan thought at him.
Fleeting impressions of the man’s surface cognitions filtered through the permeable membrane of Alan’s consciousness: mild surprise, then recognition, and then a strange kind of resigned satisfaction.
“And there you are,” the man whispered.

Adrian Randall is a PhD and a dual-class bureaucrat/scientist. A native Floridian, he lives in Alexandria with the love of his life and their many beautiful board games. He has a tenuous grasp on reality, owing to a steady diet of novels, comics, and other distractions. All his ideas start as character backstory for MMOs and RPGs, and he does all his writing while listening to video game soundtracks. So if he's gaming instead of working on a book, it's not procrastination, it's workshopping. He usually spends his free time geeking out about some damn thing or another. You can geek out with him through any of his social media channels. If he doesn’t respond, it means he broke his phone again.