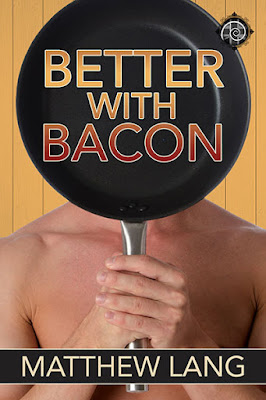 When Patrick’s long-term girlfriend Li Ling dumps him just as he’s working up the nerve to propose, he ends up drunk on David’s couch—and later in David’s bed. Although initially reluctant to pursue anything beyond a one-time drunken tryst, David throws caution to the wind during an intimate dinner, where the two men also discuss Patrick’s dream of entering the food industry. Just as the friends-turned-lovers are settling into their new romance, Li Ling calls Patrick—she’s pregnant.

Convinced the announcement spells the end of their love affair and a return to their platonic friendship, David flees to Sydney to escape his heartbreak. But upon his return to Melbourne, David discovers the situation hasn’t gone the way he’d expected. There might still be a chance for David and Patrick’s dreams to come true if they can forgive each other’s mistakes and move forward.

Hidden away in Potts Point, Sydney, just behind the strip clubs and hetero bars of Kings Cross is a tiny yoga studio, its entrance screened off just inside the door and Ikea box shelves off to one side. The warmth of candles and the smell of eucalyptus filled the air, and six yoga mats lie on the flor, one occupied by an older gentleman wearing shorts. Just shorts. Fairly short shorts. With a gaping leg hole. He’s lying on his back, stretching, and I can see his balls hanging out of the right leg hole. I later learn he’s married, and hasn’t done any activity naked since he, and I assume his then boyfriend, went to Mykonos some forty years ago and spent a lot of time naked. Two other guys are already in the room, and it’s slightly awkward to strip down in front of strangers. I’ve done it before, at Adam, Sircuit’s nude night(s), or on some beaches, but never in such a small room surrounded by complete strangers.
There’s a saying: “Write what you know”. That is an incredibly limiting concept, but a good one for someone just starting out. There’s the flippant: “Write what you don’t know,” which some people hold to, but what most writers hold to is best summarised as follows: “Write what you know, extrapolate what you don’t”. Whether it’s writing a character of a different sexuality and gender or a profession you have no experience in, or writing magic or technobabble I feel a writer should always find that bit of themselves that connects to what they’re writing, and use that in conjunction with research to get as close to a true portrayal as possible. Of course, the more things you experience, the easier both writing what you know and extrapolating becomes. That’s one of the ways I justify doing insane things to myself, but to be fair, deciding to head to Naked Men’s Yoga was sparked by an article I read years ago about a straight journalist who went to try it out, although possibly a different class to the one I was able to get to on my recent trip to Sydney. The journalist found it confronting – and a bit sexually suggestive. I thought I’d make up my own mind.

Being naked is an amazing leveller, as long as you’re in a social setting rather than a gay cruisy setting. When everyone’s naked you don’t judge people on their clothing, and you can’t talk yourself out of a conversation with them because they don’t dress like your sort of people. Given that you’re seeing everyone’s body and everyone’s seeing yours it’s also much less erotic than seeing everyone in their underwear. It answers all the questions about what’s under the layers and honestly, when you’re trying to superman into warrior three without losing your balance and falling on your face does take one’s mind off the soft cock hanging out across the other side of the room.
The Gay Men’s Yoga class runs for one and a half hours, which is longer than I’m used too, but after about an hour the partnerwork aspect of the class starts. It’s essentially a few assisted yoga poses where another student applies light pressure to help you deepen your stretches, and helps to guide and support your body into better posture. And depending on the pose and where you’re wavering, it’s possible that effective support will mean having a soft cock pressed against your body somewhere. It’s certainly intimate, and synchronising your breathing to your partner’s to maximise the efficacy of your pressure can be sensual, so having someone pop a semi wouldn’t be a surprise to me.
The massage part that followed took me a bit by surprise though, although it probably shouldn’t have, as it’s mentioned on the website. I’ve always found naked male on male massage not on a massage table to be a somewhat erotic experience, especially as getting at the muscle’s on someone’s back usually means having to sit on them unless you want to pull one of your own muscles. The massage portion of my class seemed to mostly be a follow along after the teacher, but without really learning any massage techniques, but it is definitely nice to have any sort of massage, even a light untrained one without oil. I can’t help thinking that the massage part could be an excuse to facilitate intimate touch, but you can have intimate touch without it being erotic, and given the range of guys who turn up, you don’t get to pick your partner or decide you’re only going to work with a hunky, well built man. There’s humanising element to touch, and an acceptance that comes with it of different bodies, which builds upon the breakdown of normal social barriers from collective nakedness. Okay, that’s mouthful, but once you get past the stripping down to nakedness there’s a comfort and an acceptance of the people around you, a lowering of barriers, and that’s the best I can describe it.
The class ends with a cup of cool tea, a shared bowl of dried fruit and a social chat. It’s odd at first, to go from a mostly silent class to a friendly conversation, but again, it’s a little ritual that is, I think, designed to break down barriers and bring people together. And we don’t have enough places that do that. After that, it’s time to wipe down the mats – I know mine was covered in sweat given I made a rather amusing sweaty back fart at one point – and heard our separate ways into the night.
I’m not sure if there’s a comparable experience to this in Melbourne. My local gay men’s yoga teacher does run nude classes, but I’ve never been game to go to one. Maybe I’ll have to try it back home. I don’t know if I will. Part of the joy of travel is doing things you wouldn’t normally do back home. Of course, once you go back home, everything you left behind is right there where you left it. In my new novella, Better with Bacon, my protagonist, David, does exactly that – runs away to Sydney, just like I did. Of course, he went to escape a painful emotional situation, I went for a writing break. And the nude yoga. And to do some catching up with friends and sightsee a bit more. I don’t have photos of the nude yoga, for obvious reasons, but I do have a video of the free flight bird show from Taronga Zoo. It’s pretty amazing, but it’s better in person, so if you do visit Sydney, check it out.

Matthew Lang writes behind a desk, in the park, on the tram, and sometimes backstage at amateur theater productions. He has been known to sing and dance in public and analyze the plots of movies and TV shows, and is a confessed Masterchef addict. He has dabbled in film, machinema, event management, and even insurance, but his first love has always been the written word. He is suspected of frequenting libraries and hanging around in bookstores, and his therapists believe he may be plotting some form of literature.