Welcome to our Grand Finale celebrations for

In today's post, we're delighted to reveal the cover for the upcoming Leaning Into The Fall (expected publication is mid-March), as well as an exclusive excerpt from this book. We're also looking at the recently re-published Leaning Into Love, which is book 1 in this series. Further down, you'll find our Q&A with Lane, plus one more chance to win!!

First up, Leaning Into Love 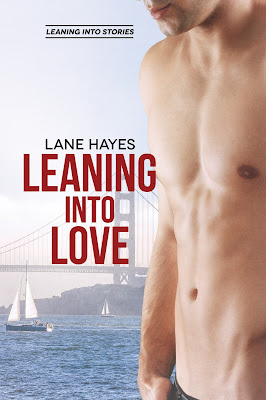 Eric Schuster is a successful guy. He’s part owner of a highly successful tech firm, he has a supportive family and a great group of close friends. But something is missing. Or maybe he’s reacting to his business partner and ex’s wedding news. He knows his former lover is making a big mistake but he also knows it’s time to move on. And hopefully avoid falling for another friend.

Zane Richards is an avid sailor and surfer with a laid-back approach to life. He firmly believes there’s a time and place for everything if you’re willing to take a chance. Like letting his best friend know he’s interested in being much more than friends. Eric has always been half in love with Zane but going from friends to lovers isn’t an easy sell for someone protecting his heart. Eric will have to decide if he’s willing to risk it all by leaning into love.


Zane refilled my glass and returned it to me with a naughty smirk. “You get kinda corny when you’re tipsy, Schuster. It’s cute.”

“Yeah. You get goofy. Your ears turn red and it makes the freckles on your nose stand out. Then you do that thing with your hair where you swipe your hand through it so many times that it looks like you just rolled out of bed.”

“Uh…okay. That’s embarrassing.” I searched for a reflective surface as I attempted to pat my unruly brown hair into some semblance of order. “I was going for debonair and I got bar mitzvah kid chic,” I grumbled.

Zane leaned forward and gave me an intense look I didn’t understand.

“You don’t have to be anyone but yourself with me, Eric. I like you just the way you are.” He sat back again and cocked his head. “So let’s talk about this stupid engagement party. What’s the dress code?”

“Um… it’s probably dressy casual,” I replied with a furrowed brow. I wanted to back up a sentence or two and analyze his words and dissect the meaning of “I like you just the way you are”.

“The usual oxymoron,” he snarked. “You are going with me, right?”

“I want. It’ll save us both the trouble of finding some poor unsuspecting sucker to drag to a fancy shindig.”

“True. Speaking of suckers, don’t you have a date tonight?”

Zane glanced at his watch and then stretched his legs out on the bench so his shoe nudged my thigh. “I’ve got time. Talk to me. What else have you been up to lately? I noticed there’s a new exhibit at the Modern Museum. Have you gone? I think it’s a midcentury retrospective with Motherwell and de Kooning. I know you like the scribbly art and…”

His conversation was easy. The gentrified version of his former surfer dude accent had a lilting quality I could have listened to for hours. I felt myself truly begin to relax and let go of the invisible hold I’d had on my emotions, like a swimmer grasping onto a ledge who finally realizes he can reach the bottom of the pool. Being with someone who knew quirky details about me and accepted them without judgment or reservation was a gift.

I treasured all of my friends, but Zane was special. Our friendship was rooted in geography and history and now time. He wasn’t making a romantic advance when he asked me to attend Nick’s engagement party with him. That was latent wishful thinking on my part. Zane was simply being who he always was. My oldest and best friend. 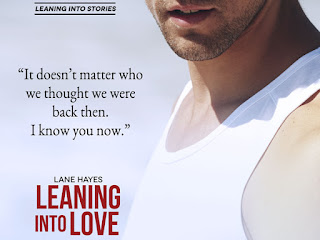 The upcoming 2nd book in this series, Leaning Into The Fall

Nick Jorgensen is a quirky genius. He's made a fortune in the competitive high tech field with his quick mind and attention to detail. He believes in hard work and trusting his gut. And he believes in karma. It’s the only thing that makes sense. People are difficult, but numbers never lie. In the disastrous wake of a broken engagement to an investor’s daughter, Nick is more certain than ever he isn’t relationship material.

Wes Conrad owns a thriving winery in Napa Valley. The relaxed atmosphere is a welcome departure from his former career as a high-rolling businessman. Wes’s laid-back nature is laced with a fierceness that appeals to Nick. In spite of his best intention to steer clear of complications, Nick can’t fight his growing attraction to the sexy older man who seems to understand him. Even the broken parts he doesn’t get himself. However, when Wes’s past collides with Nick’s present, both men will have to have to decide if they’re ready to lean into the ultimate fall. 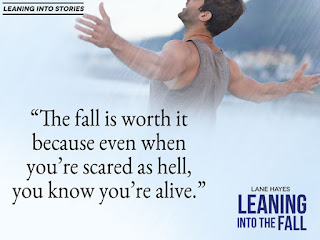 Here is the gorgeous cover: 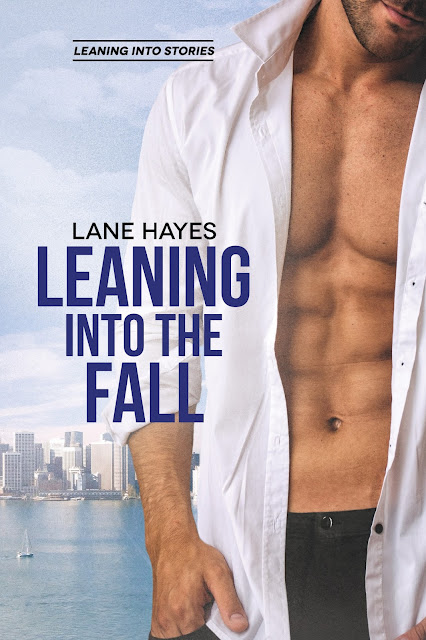 For the second time in a week, I’d gone into a simple situation that should have led to a certain outcome, only to find myself getting an intimate peak into Wes’s life. Last Saturday should have been an easy jaunt to wine country to unload my unwanted purchase. Instead I ended up driving home well after dark in a rental car wearing his clothes. And unfortunately not because of some big sex-capade. The odds of running into Wes a week later in my neighborhood seemed pretty damn low. Maybe this was a setup. Maybe Wes’s appearance here had something to do with the Byzantine deal.  Maybe—

“You look like a kid with a dollar in a candy store. You know can’t have everything, but you sure as hell want something.” Wes’s throaty chuckle ripped me from my reverie.

“You’re right. I’m dying to know what the fuck is really going on here.”

“Ah. I remember you have a superstitious nature. Cause and effect, karma, clean slates. You don’t allow for chance, do you?”

“Sure. But not wild coincidence. If you think—”

“There are too many people here. Come with me.”

Wes inclined his head toward the sweeping staircase and stepped away, leaving me to follow. I didn’t hesitate. I took the stairs two at a time to catch up to him. He stood at the top of the landing leaning on the semi-circular railing overlooking the marble entry. The light from the grand crystal chandelier overhead glittered like diamonds on the high ceiling. The soft illumination lent an ethereal glow to the space reminiscent of a pivotal scene in a romantic movie. I shook the fanciful thought as I followed Wes down the short hallway to what looked like a master suite.

The bedroom was decorated in deep shades of blue. A giant four-poster bed was positioned opposite the French doors to take advantage of the impressive view of the Bay. Wes opened the doors with a flourish, revealing a balcony. He turned with a mischievous grin and motioned for me to join him.

“Views like this one make me miss the city,” he said conversationally then added, “I’ll grant you three questions. Make ’em good.”

I gave a cursory glance toward the twinkling lights on the Golden Gate Bridge but I was infinitely more curious about him.

“Why did you move?” I stood close to him for body warmth.

“Is that one of your questions?”

“No. I need to put some thought into this if I only get three.”

“I have my moments,” I retorted through chattering teeth. Fuck, it was cold out here.

Wes wrapped his arms around me and rubbed my biceps. The maneuver seemed unconscious rather than calculated. And it made me feel oddly… safe.


I’m inspired by a medley of things like travel, theater, music, family, friends, and silly every day events. And I’m a sucker for humor. If something or someone makes me laugh, I try to find a way to incorporate it in a story. As far as what gets me writing…I do! Lol. I write everyday simply because I love it. ☺

I usually begin with an outline. However, it gets revised countless times during the process because sometimes the characters take over. LOL. I wish writing was more of a linear process for me, but it’s not. At the end of the day, I’m a super organized person who’s a “seat of the pants” author.

Each character has a special place in my heart, though I admit that while I’m writing a story, I’m usually drawn toward one of the MCs more than the other. A few of my lasting crashes are Jack from Better Than Friends, Alex from The Right Time, Rand from A Kind of Truth, and a monster crush on Adam who you’ll meet in A Kind of Home. And in my new series… let’s just say I’m a little starry-eyed over one of the MCs in my current WIP. ☺

If I had to choose it would be a secondary character, like Tonio in The Right Words and The Right Time. He’s a necessary reminder of a generation who honestly believed DADT was a good thing. Not because he didn’t love his son but because he assumed silence was the best form of protection.

I would have written an epilogue for Better Than Good. LOL. I’ve written them for all of my other books. BTG was the only one that didn’t get one. The reader in me adores that extra glimpse into the characters’ lives, which is why I’ve written a number of Matt & Aaron short stories. You can find them on my blog. ☺

I’m currently working on book 3 in the Leaning Into series. I don’t want to give too much away, but I will tell you this is Josh’s story. Book 4 will come next and then I’m planning to head back to LA to revisit the boys from Right & Wrong. After that…I think we’ll go east. Chicago? Boston? Any ideas?

Lane Hayes is grateful to finally be doing what she loves best. Writing full-time! It’s no secret Lane loves a good romance novel. An avid reader from an early age, she has always been drawn to well-told love story with beautifully written characters. These days she prefers the leading roles to both be men. Lane discovered the M/M genre a few years ago and was instantly hooked. Her debut novel was a 2013 Rainbow Award finalist and subsequent books have received Honorable Mentions, and were winners in the 2016 Rainbow Awards. She loves red wine, chocolate and travel (in no particular order). Lane lives in Southern California with her amazing husband in an almost empty nest.


Thanks for celebrating with us all through February. We hope you found a few new books to put on your never-ending TBR, and learned some facts about this fabulous author. Let us know in the comments - we love to hear from you.