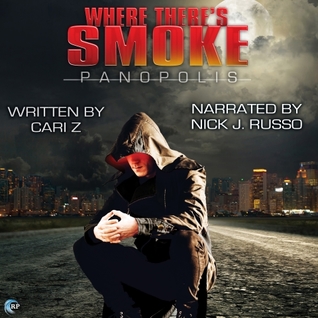 
Panopolis is a rough place to be an average Joe. I came here looking for adventure and excitement, but nobody cares about one more normal guy in a city filled with super-powered heroes. The closest I’ve come to glory is working in a bank that villains often rob.

But then I maybe accidentally-on-purpose helped a villain escape the hero who was trying to save the day. Imagine my shock when, a week later, that villain asked me out for coffee. One date turned into more, and now I’m head over heels in love with Raul.

Falling in love with the guy dubbed the Mad Bombardier isn’t without its downsides, though. I’ve had to deal with near-death encounters with other villains, awkwardly flirtatious heroes who won’t take no for an answer, and a lover I’m not sure I can trust. It’s getting to the point where I know I’ll have to make a choice: side with the heroes, or stand fast by my villain.

Either way, I think my days as a normal guy are over.

Well that was fun...

Once again I've gotten to enjoy a book that's sat on my TBR list for much longer than it should have thanks to the fun that is audio books.

Panopolis is an unusual city that seems to be filled with superheroes and super villains and a lot of ordinary normal people who tend to get caught in the cross-fire of their battles.  Edward Dinges just happens to be one of those ordinary, normal people and his life is about to become rather complicated and extra-ordinary when the bank he works at is robbed by one of those super villains.

Eddie and Raul, a.k.a. The Mad Bombardier meet when The Mad Bombardier robs the bank where Eddie works and to say the least their's is not an easy relationship. Along with the usual relationship challenges there's the whole issue of Raul being a super villain...but, in his defense he is a super villain with scruples...so there is that. Of course there's also the fact that Eddie's nosy neighbor is the grandmother to a superhero by the name of 'Freight Train' who just happens to like Eddie. Like I said relationship challenges these boys have them. While there is more than a romance story being told here, have no fear there is still a sweet and adorkable romance going on as well.

A good portion of the world-building for Panopolis is given to us through the broadcasting of a local radio announcer named 'Super Truther' who seems to be a bit of an enigma, himself. I know I'm probably going to date myself here (not because I remember this personally but my parents do and by default to a degree that dates me) anyways, this character made me think of the radio propaganda announcers used during WWII, Axis Sally and Tokyo Rose were probably the most well known names from that time, but it was small things like this that gave life to the setting of this story and helped to draw me into what was happening.


When I was a kid I loved reading comic books and with 4 brothers I was pretty much kept in an endless supply of them and on occasion I can still be found with one in my hand or more often than not going to the theater to catch the latest Marvel movie release or standing in the check-out line with the latest Marvel dvd/blueray release included in my purchases. My point being this one was smack dab in the middle of my wheelhouse. How I managed to keep from reading it until now is a bit of a mystery even to me.

Now about the audio portion of this review in a nutshell Nick J. Russo was the narrator and needless to say I was not disappointed in the slightest. In fact, I'm considering whether I want to go ahead and read the remaining two books in this series or wait for the audio books...it's a very tempting possibility and one that I'm going to have to give strong consideration.

If you're a fan of superheroes or more importantly you find yourself cheering for the the underdog (no I'm not talking about the cartoon here) I mean the guy who's not suppose to win, who the odds are stacked against...that's right the villain. Then you need to check this one out. It's short and fun and if you like it there's more where it came from.

An audiobook of 'Where There's Smoke' was graciously provided by the publisher in exchange for an honest review.