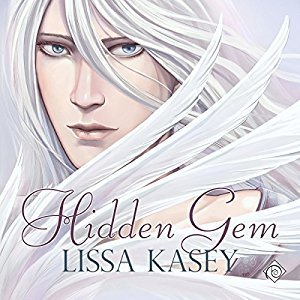 
Misaki “Aki” Itou is a psi—a person with mutated DNA granting him psychic abilities. He’s also a contracted companion—a whore. It may not be the perfect profession, but having a roof over his head, food to eat, and not being subjected to torture is a dream come true. He is the top companion at the Hidden Gem, and it makes him enough money to buy the prettiest, most sparkly shoes he can find.

Shane McNaughton is an Irishman who survived the Third World War and works as a cop. Head of Missing Persons, he’s good at finding people, but after the plague of the Third mutated his DNA, he has a hard time letting anyone see the monster inside. He’s been paying for Aki’s services for two years, both the psi and the sexual kind, but he wants more from the companion.

Shane needs Aki’s ability to see into another person’s past to track down a serial killer murdering the children of rich and powerful men, but the more they work together, the clearer it becomes that they are linked through a darker past than either of them realizes.

I've been making grabby hands at this one for a while now. I bought the e-book back in...ok, never mind I bought the e-book ok. Then I was offered the opportunity to review the audio book so I jumped at it and am I ever happy I did that little thing.

Misaki “Aki” Itou is a psi, he's also a highly paid whore and he's in love with Shane McNaughton who happens to be a police officer and a survivor of the third world war. Only Shane didn't survive totally unscathed. His genes were mutated so now he's a shifter. People don't know about his 'kind' and he doesn't want anyone seeing the monster he guards so closely but Shane's in love with Aki and he wants him in his life all the time.

In a nutshell there's a romance in this story it's good and in a lot of ways it's really, really sweet. I love these two but their romance is definitely not the main focus of this story. Although I never felt like it got thrown to the wayside, it was subtle and understated at times.

'Hidden Gem' is the name of the house where Aki works along with his best friend 'Candy' (but you have to wait until book 3 for Candy's story). Strange as it seems Aki is grateful to have the life he has. When he was found by Bart, the man who holds his contract and own's the Hidden Gem and Paris, the man who trained him to work for Bart and himself a former whore until he bought out his own contract, Aki was living on borrowed time and had no idea how he was going to survive.

To say that life as a whore is challenging for Aki is an understatement given that his psi power is that he sees other peoples memories and feels their emotions when he touches them and he's never been trained to manage his powers, but, while there are limits on what he can and will do Aki is beautiful and men want him. So where there's a want there's a way and as Paris promised he soon becomes one of Bart's top earning whores.


Given that fantasy/scifi/dystopian/post-apocolyptic/paranormal/shifter type stories while something that I'm cautious with have also been genres that have fairly consistently drawn me in, as well, it doesn't surprise that I enjoyed this one. What does surprise me is how much I enjoyed this story.

I loved the world building...it was fabulous, I loved so a many of the secondary characters Paris (his story is next), Candy, Bart, Shane's partner...Jackson Taylor (another MC for book 3). If books 2 and 3 hook me in as well as this one has...well, I'm a happy, happy girl.

So while the book was damned near perfect I have to admit I'm not quite as over the moon about the narration but having said that I was so enchanted with the story that the narrator really didn't seem to detract from it either. I honestly have to admit I may have to give this audiobook a second go round because I was so focused on the story that I'm not truly convinced that I gave Adam McLaughlin, the narrator in question a fair listen but since he definitely didn't spoil the story for me I'm going to give him 4 stars.

Was this a perfect story...probably not, but, it was a story that worked perfectly for me.

An audiobook of 'Hidden Gem' was graciously provided by the publisher in exchange for an honest review.