Audiobook Review: Don't Twunk With My Heart by Renae Kaye 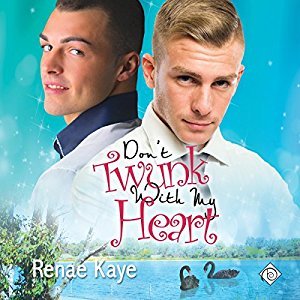 
Kee Smith isn’t sure who he is anymore. He knows who he used to be—the ignored gay son who chose a blue-collar job just because no one expected it, the submissive bottom who enjoyed large, masculine jocks who put him in his place, the sleek, fashionable twink who partied all night. But after his ex-boyfriend hit Kee and called him names, Kee retired from the social scene.

Back after a year’s hiatus, Kee still doesn’t know where he fits. His friends say he’s a twunk—a twink who put on muscle and turned into a hunk—but Kee is searching for somewhere to belong. Instead of going back to his usual type, Kee hooks up with twink Tate Stevens—a fashion-industry professional who works the image hard. It proves to be the best decision he’s ever made, and not just because he’s starting to regain his sexual confidence.

With Tate, Kee can open up about his fears and confusion without ridicule. Tate has his own fears about putting on weight and getting old. It will take work to make a relationship of opposites succeed, but they begin to realize the compromises will be worth it if they can be together.

'Don't Twunk With My Heart' is the second book in Renae Kaye's 'Loving You' series and while I have to admit I did like 'Loving Jay' a bit more this one was a cute, fun story with little to no angst and drama, so it made for a fairly pleasant read.

Kee's been out of circulation for a while following a bad break-up with his ex but his friends have convinced him that it's time to get back out there and happily one of his friends is Jay from the first book in this series. It's on Kee's first foray back into the social scene with his friends that he encounters Tate.

Kee's attention isn't normally drawn to Tate's type, but for some reason that changes as they have a little bump 'n grind competition on the dance floor to see who will get the attention of the big, burly dude that both men seem to be drawn to and as fate would have it burly dude doesn't end up with either of them because both men are happy to keep the dance partner that they started with...each other.

From a chance encounter on the dance floor these two men progress to dating and it's a sweet relationship that unfolds. I very much enjoyed watching as their feelings for each other grew and their relationship developed with relatively normal obstacles.

While each man had their own issues to deal with and to share with the other as they became closer and their role in each other's lives increased. Kee's family is a bit of a challenge as are his residual fears from his break-up with 'Matt the rat' andTate deals with a demanding job in the fashion industry and the effects that it has on his image and his self esteem.


They also dealt with things as a couple and there was communication. I loved how they compromised to make things work. Tate went to the football games because Kee wanted him too. Kee let Tate dress him up and basically use him for a model at events because it made Tate happy. Compromise...it's a thing and in a relationship it's a necessary thing.

As well as enjoying the interaction between Kee and Tate, I liked getting to see them interact with their friends and family. It was often times both cute and humorous while adding some realistic depth to the relationship.

While the story gets 4 stars from me. The narration gets 3 so I'm settling on an overall rating of 3.5 for this one. Joel Leslie was a new to me narrator with this one and some of his voices just weren't working with my internal monologue so for me the audio book wasn't as enjoyable as it might have been and I have to admit this is a very subjective thing in my opinion. Another book and maybe I would have been over the moon with this narrator but facts are it was this book and the narrator's version of some of the characters just didn't mesh with what my brain was conjuring up.

My recommendation if you're looking for a cute low to zero angst story that makes you feel good and smile check this one out, if you're not sure about the audio version listen to the audio sample and decide for yourself if this is a narrator you'll enjoy.

An audiobook of 'Don't Twunk With My Heart' was graciously provided by the publisher in exchange for an honest review.