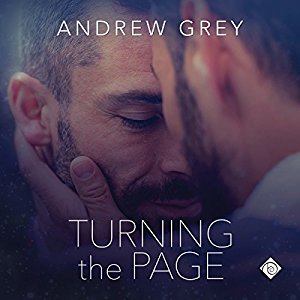 
Malcolm Webber is still grieving the loss of his partner of twenty years to cancer. He’s buried his mind and feelings in his legal work and isn’t looking for another relationship. He isn’t expecting to feel such a strong attraction when he meets Hans Erickson—especially since the man is quite a bit younger than him.

Hans is an adventure writer with an exciting lifestyle to match. When he needs a tax attorney to straighten out an error with the IRS, he ends up on the other side of the handsome Malcolm’s desk. The heat between them is undeniable, but business has to come first. When it’s concluded, Hans leaps on the chance to make his move.

Malcolm isn’t sure he’s ready for the next chapter in his life. Hans is so young and active that Malcolm worries he won’t be able to hold his interest for long. Just when he’s convinced himself to take the risk and turn the page, problems at the law office threaten to end their love story before it can really begin.

Let's start with the story...

I really liked this story had I read the e-book this would have easily been 4 stars. There was a lot of good stuff going on here for me. Mature MCs. I love this and especially when they act their age and even more when I find out that by mature we're talking about a man in his 50s and the 'younger' man is in his 40s. Total win in my books. Both of these men are self sufficient, successful, independent men...no sugar daddies here.

Malcolm is a tax lawyer. He's 52 years old and he's grieving the loss of his partner of 20 years...YES!!! A successful long term relationship...no hidden secrets coming out of the closet. Malcolm loved David. David loved Malcolm. They had 20 happy years...until they didn't because David died from Cancer leaving Malcolm struggling to refind himself and put his life back together.

Hans is a successful writer and mets Malcolm when he's seeking professional advice from a tax attorney. Our men are mature and despite their obvious attraction neither of them wants to mix business with pleasure so they take care of business and go their separate ways.

Until enter Malcolm's brother, Peter, who's determined to drag his brother back to the land of the living. Kicking and screaming if he has to. It's a chance encounter when Malcolm's out with his brother that brings Hans back into his life and this is where their story truly begins.

Hans is no stranger to loss and while he's never buried a partner. He has buried a relationship and he understands the grieving process and he's willing to be patient and allow Malcolm the time he needs to move on.

I really enjoyed this story. Hans was perfect for Malcolm in spite of Malcolm's reservations about their age difference. Hans was sweet and patient, he was mature enough to have some life experience, he had his own life both professionally and personally. For me it was so clear he wanted Malcolm not for what he had but for who he was. He didn't care that there was a 10 year age gap between them. Admittedly there were times that Hans almost seemed too good to be true but there were small cracks in his character that showed just enough to keep him from being over the top, gag me perfect.

Malcolm's insecurities about the age difference and in regards to himself in general while understandable did come a little close to over the top once or twice but they never came close to spoiling the story for me, so no problem there in my view.

There was a secondary part to this story which revolved around events happening at the law firm where Malcolm was a partner and I liked the interest that they added to the story without taking away from the relationship development between Malcolm and Hans. Could the story have done without this...possibly but it was there and I found it to be a bit of additional interest so in the end it's all good.


My biggest niggle was the device used to make Malcolm honestly address his feelings for Hans allowing their relationship to move forward. Without giving any more details I'm just going to say that it was the one point that struck me as a bit too contrived and kept this story from being a solid 5 stars.

Other than that one niggle, when all was said and done this story was definitely a win for me. Two mature MCs that I liked, a story that I liked, a few humorous moments and an ending that worked well for me...so what happened to 4 stars...

Let's talk about the audio book...

This was narrated by Jeff Gelder. Mr. Gelder is a narrator whom I've never listened to before so I was looking forward to seeing if this would be another narrator whom I could enjoy. Unfortunately this will not be happening. While this was my first book by this narrator I did actually take the time to check out several samples of other books narrated by him on audible.com and I'm fairly comfortable saying his voice just doesn't work for me. It was definitely the story that held my attention here so while this wasn't one of my better audio book experiences it was an enjoyable story and I'm leaving things at 4 stars for Andrew Grey's book 'Turning the Page' and 2 stars for the audio portion settling on 3 stars for an overall rating.

An audio book of 'Turning the Pages' was graciously provided by the publisher in exchange for an honest review.