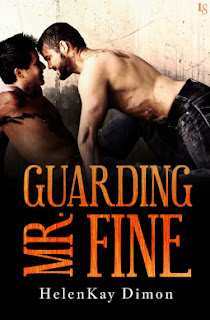 
As an agent with the CIA’s special activities division, Seth Lang lives for risk—and yet he’s stuck playing bodyguard to the U.S. consul general in Munich. Although Seth’s last assignment nearly killed him, babysitting some desk jockey in a suit sounds way too easy. But when he lays eyes on the new top man, tactical expert Rick Fine, Seth’s thrilled to see just how hard this job is going to get. Mr. Tall, Dark, and Quiet has a body worth guarding—and he requires hands-on attention day and night.

Dispatched to a German consulate to expose the murder of his predecessor, Rick finds himself in an extremely vulnerable position. He needs a man like Seth—in so many ways. This mission will inevitably plunge them both into jeopardy, but each new threat only brings them closer. Rick just hopes that he can keep his deepest, darkest secret hidden—or else risk imperiling a relationship they’re both fighting for their lives to protect.

This book is another crazy sexy, thrilling addition to the Tough Love series. Seth was an integral secondary characters in the first two books, and I fell hard for his biting wit and brilliant mind (no, seriously, intelligence is so fucking sexy).

As predicted, Guarding Mr. Fine is stupidly hot. Seth and Rick go at it hard and fast, first as strangers, later as friends.

Seth, who's allergic to relationships and commitment, cannot stay away from Rick. There's just something about the man—with his geeky glasses, confidence, rockhard bod, and scratchy beard—that turns Seth into an uninhibited sex god.

Rick is posing as a consulate general in Munich; he suspects his predecessor didn't commit suicide but was offed. Seth is sent in to protect Rick and help in the investigation, which is wrapped up in some shady shipments and illegal weapons.


I loved the banter between Seth and Rick. Every argument ends in explosive sex, especially when Seth gets jealous (which he totally does when faced with Rick's former lover).

They lay there, with Rick on top of him . . . Rick trailed a line of kisses up Seth's throat before turning his head and resting it against Seth's chest again. "This position makes it harder for you to get up and run to the couch."

The jackass. "You're hysterical. I need to shower, but I'm not moving."

Thank God . . . "You do realize this means you're agreeing to cuddle."


Rick loves it when Seth owns him. He's just worried that once he reveals a past incident that haunts him (and that, unbeknownst to Seth, involves him), Seth will leave. He's not completely off the mark, either.

I did not like Seth's reaction at the end; it seemed a little out of character. Fortunately, he comes to his senses, with a little help from his boss Max, the badass Ms. Bond, and Nathan playing devil's advocate.

Unlike book 2, which continued the plot set up in book 1, Guarding Mr. Fine CAN be read as a standalone. I enjoyed the mystery, although I guessed the "bad guy" almost immediately, despite the many red herrings.

I hope this isn't the last book in the series. I already have my heart set on the next MC.