Release Blitz: A Face without a Heart by Rick R. Reed 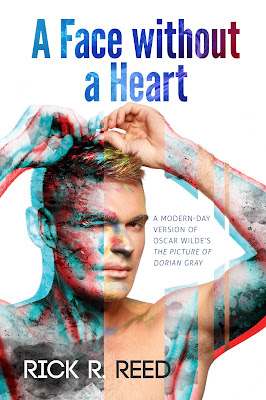 A modern-day and thought-provoking retelling of Oscar Wilde’s The Picture of Dorian Gray that esteemed horror magazine Fangoria called “…a book that is brutally honest with its reader and doesn’t flinch in the areas where Wilde had to look away…. A rarity: a really well-done update that’s as good as its source material.”

A beautiful young man bargains his soul away to remain young and handsome forever, while his holographic portrait mirrors his aging and decay and reflects every sin and each nightmarish step deeper into depravity… even cold-blooded murder. Prepare yourself for a compelling tour of the darkest sides of greed, lust, addiction, and violence.

He was beautiful. Beauty is so seldom ascribed to men, too often incorrectly attributed to men with feminine features—wavy blond hair, fine cheekbones, teeth cut from porcelain. But I’ve always thought of beauty as a quality that went deeper than the corporeal… something dark, dense, inexplicable, capable of stirring longings primal, longings one would be powerless to resist.

He was beautiful. I sat on a Red Line “L” train, headed downtown, bags of heavy camera equipment heaped at my side, one arm resting protectively over them. I watched the young man, unable to train my thoughts on anything other than this man who had blotted out the reality of the day, magical and transforming. Beauty, especially so rare a beauty, can do that. The young man was an eclipse, his presence coming between myself and the reality of the day hurtling by outside train windows.

He had come in behind three foreign people, a bright counterpoint to their drab clothes, colorless, already wilting in the August humidity. They chattered to one another in a language unrecognizable, Polish maybe, and I was annoyed at their yammering, unable to block it out sufficiently enough to concentrate on the book I was reading, a biography of William Blake.

I almost didn’t notice him. It wasn’t like me to pay much attention to what went on around me, especially when I was preparing for a shoot. Usually I used the time on the train to set up the photographs I would take, the way I would manipulate light and shadow and how it fell on my models, to arrange the props, set up and test the lighting.


But something caused me to look up when the doors opened—perhaps I was struck by the dissonance created by the unknown language—and I saw him. Close-cropped brown hair, a bit of stubble framing full lips, a bruise fading to dull below his right eye. The bruise did not detract from the man’s beauty but served to enhance it, making of the rough features something more vulnerable. The bruise was the embodiment of a yearning for the touch of a finger, the whisper of a kiss. He wore an old, faded T-shirt with a Bulls logo, black denim cut off just above his knees, and a pair of work boots, the seam on the left beginning to separate. In spite of the workman’s garb, there was something intellectual about the man, an intensity in his aquamarine eyes that portended deeper thought.

At that moment, I made a decision. I don’t know what caprice seized me. I have always led an orderly life, completely without surprise. But when the train pulled to a stop and the young man stood, I acted on an impulse that was as sudden as it was uncontrollable.