Blogtour: More Things In Heaven And Earth by Paul Comeau

More Things In Heaven And Earth

Hello everybody.  I hope you had a wonderful Christmas and I wish you all the best in this New Year!  Paul Comeau here, ever grateful for this opportunity to chat with you about More Things in Heaven and Earth.  Let me begin by expressing my sincere thanks to everybody at Dreamspinner Press for the patience, encouragement, and understanding they afforded me in this my first novel.  From start to finish, I couldn’t have asked for a more supportive and more professional team.  And a special thanks to Catt Ford for her amazing cover design.
If you know anything about vampires, then you know they are a law unto themselves. Damien is no exception.  He didn’t ask to be what he is, but he makes the most of what he is:  hunting down his victims at will, savagely draining them of the blood he must have to survive, needing and wanting nobody.  Sounds a bit like any large corporation or majority government, doesn’t it?  How many times have you heard somebody say, or perhaps complained yourself, that government imposed taxes are sucking us dry.
But then Damien meets Danny, and suddenly the old law is called into question as a new regime takes over—a regime governed by friendship and love.  Not immediately, to be sure, and not altogether, but by degrees Damien transitions from a vicious predator to a caring, loving protector.  In this new dispensation, he still requires blood to survive, and he can still access his unmatched killer instinct, as he does when called upon to defend Danny from his father, Frank, his parish priest, Monsignor Monahan, his boyfriend, Jared, and the biker thug, Matt.  But ultimately, Damien’s need to be needed and loved far outweighs his baser need to control and dominate, leading him to sublimates the latter to the former.
Nevertheless, the transition if not without cost, as Damien is forced to confront difficult truths about himself, as he reluctantly tells Danny, referencing the time they first lived together under the same roof:

“Each night, when I returned from hunting, I’d sit in your room watching you sleep. Sometimes for hours, though I made sure to be out of there before you woke up. You looked so innocent and helpless and beautiful lying there. And what was I? A monster, a wild animal, a cold-blooded killer. For the first time I faced the real me, and I began to hate what I was and what I did to others. I was terrified of corrupting you by association, or that you might finally see through the masquerade and end up despising me. I couldn’t bear the thought of that.”


What Damien can bear even less is seeing Danny lying helplessly in a coma, after he’s been beaten to within an inch of his life.  It is all Damien can do to contain his rage at the culprits who did this to Danny, his prevailing fear being that if and when Danny finally awakens, he might no longer remember Damien or the life they’ve built together.

Looking back, I can’t recall exactly when I came up with the idea of the coma, probably on one of my long morning walks.  I knew I wanted to create opportunities for Damien to do more dramatic vampire things, though what he does to Monahan is pretty dramatic.

And having him track down Danny’s attackers, particularly the biker thug Matt, was a way to achieve that goal.  In addition, having Danny lying motionless in a hospital bed also provided the opportunity for me to bring Damien face to face with Danny’s mother, Irene, and his sister, Vanessa, allowing me room to develop the female characters more fully in anticipation of their accepting Damien as a member of their family.  I was pretty satisfied with all I’d said previously about Eleanor Sanchez, but through Irene sitting and talking to Danny, as people are encouraged to do with coma patients, I was able to tie up the loose ends of what happens to Eleanor and Mrs. Sanchez, as well as impose a measure of justice on Irene’s foreman, Larry, who is such a jerk in Part One.

More Things in Heaven and Earth was a joy to write and my hope is that you’ll find it a joy to read. 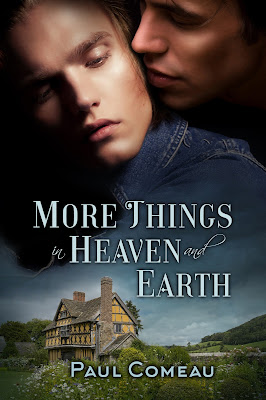 When young Danny Crawford’s father and a priest conspire to subject him to conversion therapy, Danny only sees one way out. But little does Danny know he’ll soon have a sentinel watching from the darkness, a guardian angel in the most unlikely form imaginable.

Damien, a vampire, is inexplicably moved by Danny’s plight. He takes it upon himself to make sure Danny’s father and the priest can never hurt him again, giving Danny a chance at a normal life. As Danny grows up, Damien struggles to keep the boy—and later the young man—from harm. He does not dare go any further, no matter how much he wants to. To do so would ruin everything he’s tried to do for Danny. He doesn’t realize that as Danny embarks on a successful modeling career and begins dating, Danny feels empty, longing for something—or someone—just beyond his reach: a shadow, a presence he despairingly believes forever lost to him.

When brutality and violence threaten Danny again, Damien must make a decision—risk revealing himself to Danny, or leave Danny to his fate.


Paul is a proud Canadian, who has recently retired from teaching high school English and is relieved to have finally traded the drudgery of lesson prep and essay marking for the pure joy of writing fiction. He is addicted to paranormal investigator shows, horror movies, all things vampire, mystery novels, long morning walks, and jigsaw puzzles. He is blessed with a loving and supportive wife, who keeps him grounded in reality while helping him navigate the intimidating world of technology, and a daughter who understands the highs and lows of the enigmatic writing process, being herself an accomplished writer and poet. When he is not compulsively tapping the keys of his laptop, he can be found at the dining room table matching the shapes and patterns of his latest jigsaw puzzle or in the kitchen roasting, stewing, grilling, and baking. He views cooking as a creative activity, like writing fiction, with the outcome often as interesting and unexpected. He imagines his characters, plots, and dialogues in the process of doing any or all of these things.