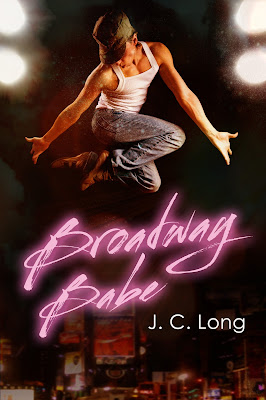 Tate O’Connor has worked hard to realize his dream of dancing on Broadway, and it’s about to pay off with a premier in his first show. He doesn’t expect the distraction of sharing the stage with his celebrity crush: Broadway superstar Mike Chang. Drama ensues both onstage and off as Tate and Mike work closely and realize there could be something between them. However, there are those who don’t think an up-and-coming dancer is good enough for someone with Mike’s talent and fame, and rumors and misunderstandings might lead to broken hearts if Tate and Mike can’t work through their confusion and insecurity.

Hello there, everybody! I’m J. C. Long and I’m here on my blog tour for Broadway Babe, my new novella from Dreamspinner Press! I want to thank you all for joining me along the journey, whether you’ve visited every stop along the way or just stopped by today. I also want to say a deep thanks to My Fiction Nook for hosting me!

I’ve been having a lot of fun on this tour—we’ve had wacky interviews, top tens, and the soundtrack I’ve selected for the novella. Now I want to do something that most writers really love to do, and that’s talk about my dream cast for the movie made on my book! While it’s always hard to find the perfect actor to play the part unless you were imagining that actor from the get-go, it’s possible to find something that works well enough. Since I’m not casting an actual movie, I can also time travel to pick actors that maybe don’t fit the image anymore but at one point would have!

First up we have our narrator/MC, Tate O’Connor. Him I didn’t imagine as I wrote—I had a vague idea, but nothing solid. This guy took the most time for me to find an actor to represent him. I didn’t find the right guy for height, but Nathan Kress has the build I think of, and he also has this expression that is exactly what I picture on Tate’s face.
Now, Mike Chang was the easiest. When I wrote him I pictured Harry Shum Jr. (hence the character named after his dancing man on Glee). Who wouldn’t want to be his leading man?
Now for Annabelle Hutch, our main lady. I love her so much. She was one of the hardest for me to figure out, but once I saw a commercial for FOX’s Scream Queens I knew who she was: the lovely Emma Roberts. She needs to be a little shorter for my story, but she’s still lovely and her personality is an EXACT match for what I feel about Annabelle.

That brings us to the closest thing to an antagonist this story has: Donnie. He was easy, almost as easy as Mike Chang. I knew who he was the moment I started picturing him. James Van Der Beek from his Dawson’s Creek days.

Now we have Ryan and Tishara, Tate’s friends in the show. They were pretty difficult because when I wrote them I actually imagined two of my friends, so finding an actor to represent them took a moment. For Ryan, I decided on Anna Kendrick, if she had shorter hair. The personality is similar, and I think she’d pull it off really well.

Tishara, I finally decided, would be Keke Palmer. I respect her skills as an actress (and she’s beautiful, right?)

Lastly we have Lucy, a character who we never actually physically see beyond a Skype call, but who plays an incredibly important role in the story itself. For her I decided on Diana Agron (again this is a character I imagined as friend, but my friend looks similar to Diana Agron, so it worked out well).

J. C. Long is an American expat living in Japan, though he’s also lived stints in Seoul, South Korea—no, he’s not an Army brat; he’s an English teacher. He is also quite passionate about Welsh corgis and is convinced that anyone who does not like them is evil incarnate. His dramatic streak comes from his lifelong involvement in theater. After living in several countries aside from the United States, J. C. is convinced that love is love, no matter where you are, and is determined to write stories that demonstrate exactly that.

His favorite things in the world are pictures of corgis, writing, and Korean food (not in that order… okay, in that order). J. C. spends his time not writing thinking about writing, coming up with new characters, attending Big Bang concerts, and wishing he were writing. The best way to get him to write faster is to motivate him with corgi pictures. Yes, that is a veiled hint.