Blogtour: The Battle Of Iron Gulch by R.G. Thomas

The Battle Of Iron Gulch

The Town Of Superstition #3


Tuesday, January 10, saw the release of The Battle of Iron Gulch, the third book of my Young Adult fantasy gay romance The Town of Superstition series. What started out as a prompt driven story with The Midnight Gardener - The Town of Superstition: Book One, and continued with The Well of Tears - The Town of Superstition: Book Two, is now continuing. Thaddeus Cane, who's been through so much in his fifteen years, his father, Nathan, Thaddeus's boyfriend, a garden gnome named Teofil Rhododendron, and Teofil's mother, Miriam, brother and sister, Fetter and Astrid, and their elf companion Dulindir, are nearing the end of their journey to Wraith Mountain. Thaddeus has gained confidence not only in his decision-making, but in his ability to perform magic as well.
At the base of Wraith Mountain is the small town of Iron Gulch. It is a mining town slowly fading into memory after a catastrophe at the mine. It is here that Thaddeus and the group must find lodging so they can prepare for their trek up the mountain. While Thaddeus is eager to begin the climb, his father tells him that they need to procure supplies, which will cost money, of which they do not have much. So in Iron Gulch they find a bed and breakfast where they trade chores and home repairs for lodging.
During this time, Thaddeus works on his magic abilities with his father. I've really enjoyed the dynamic between Nathan and Thaddeus Cane. I'll admit, Thaddeus is a bit of a goody-goody, but he's been particularly sheltered during his childhood. Below's an exclusive excerpt from The Battle of Iron Gulch - The Town of Superstition: Book Three, in which Thaddeus's father instructs him on using magic. 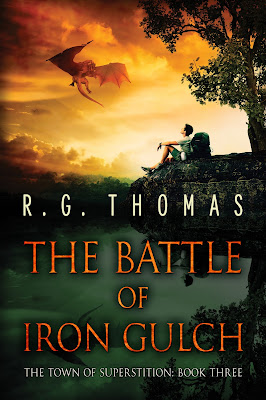 Thaddeus Cane has finally reached the foot of Wraith Mountain. He hopes to soon find his mother, Claire, who was cursed by the witch Isadora when Thaddeus was just a baby, and bring Claire back to Superstition to live with him and his father, Nathan. With Teofil, his garden gnome boyfriend, and Teofil's mother, sister, and new elf friend Dulindir, Thaddeus discovers, however, that getting to his mother will not be as easy as they'd hoped. They are forced to find shelter in the small town of Iron Gulch as Thaddeus's father takes a job in order to secure the equipment they will need to climb the mountain.

The longer they stay in Iron Gulch, the more Thaddeus feels things in the small town are not as pleasant as they appear on the surface. When a new and vicious enemy suddenly reveals itself, Thaddeus and his group will have to battle not only for their own lives, but those of the residents of Iron Gulch. As the battle rages on, they find Thaddeus's mother, and turn their fight to free her and end Isadora's tyranny once and for all.


“Where do you think magic comes from?” Thaddeus asked.
“Magic is an extension of our bodies," his father said. "It starts inside of us, and there’s been some argument over the years about where, exactly. Some say it starts in the brain, where the outcome of the spell is imagined, but others think it comes from the heart, where the spell caster’s true intention is harbored.” Nathan looked out over his arm. A row of weeds fell over as if they had been cut, starting from just beneath Nathan’s fingers and extending out in a straight line. Thaddeus gasped and looked from the path in the weeds to his father’s grinning face and back again.
“I think it comes from a combination of the two,” Nathan replied, then lowered his voice and leaned in closer. “And a spot low in your belly. Though nobody likes to admit to that.”
“Why not?”
“It’s not as romantic, I guess.” Nathan shrugged. “Anyway, what I did just now was I imagined myself cutting down those weeds in a straight line.”
“That’s it?” Thaddeus asked.
“That’s it.” Nathan picked up a small piece of asphalt and placed it in Thaddeus’s palm. “Since the other times you’ve conjured magic you’ve been under duress, let’s start small. Feel that rock: the rough edges, the bumpy surface. Fix the feel of it in your mind.”
“Okay.” Thaddeus nodded. “Got it.”
“Good. Drop the rock on the ground.”
Thaddeus let it slip from his hand.
“Now throw it across the lot without touching it.”
Thaddeus looked between the rock at his feet and the edge of the parking lot, gauging the distance. He furrowed his brow and stretched his arm and fingers down, pointing to it. He focused his thoughts on the rock, imagined it flying through the air and landing at the far edge of the lot.
“Imagine it still in your hand,” Nathan said, his voice quiet and calm. “Feel it in your grip.”
Maybe if he closed his eyes. Thaddeus stretched his fingers even farther toward the ground. He could recall the memory of how the rock had felt in his hand, but it didn’t feel like he was holding it again. Sweat beaded across his forehead and a line of it ran down his side, even though a cool breeze was blowing. He put all of his energy into grabbing the rock and flinging it across the parking lot.
Just when Thaddeus thought he would never be able to do it, he felt something in his palm. It was rough-edged. Crumbly. He gasped and opened his eyes to find the rock sitting in his hand. When Thaddeus looked up, his father was smiling at him.
“Did you mean to pick it up?” Nathan asked.
Thaddeus shook his head. “I wanted to throw it across the parking lot like you asked me to.”
“But you summoned it,” Nathan said. “And that’s an important start.” He laughed and pulled Thaddeus in for a strong hug. “You just did magic, my boy. And without someone’s life on the line.”
Thaddeus blew out a relieved breath and hugged him tight. When Nathan pulled back, they looked at each other and laughed again.
“I did it,” Thaddeus said. “I really did magic.”
“You really, truly did.” Nathan squeezed his shoulder. “I’m proud of you.”
“Thanks.” Happiness filled Thaddeus, as bright and warm as summer sunlight. He closed his fingers around the rock, the rough edges digging into his palm, and then he opened his hand and tossed it in the air a couple of times before slipping it into his pocket. “I’m keeping this as a memento.”
“Good.” Nathan tipped his head toward the other side of the parking lot. “We should get back.”

R. G. Thomas has been reading books from an early age. As a young gay man, however, he found very few characters with whom he could truly identify. Now that he's an adult—or at least older than he used to be—he likes to write stories that revolve around gay characters. The Town of Superstition is his YA fantasy gay romance series which includes wizards, witches, and other magical creatures.

When he's not writing, R. G. Thomas loves to read, go to movies, watch some TV, and putter around in the small suburban patch of ground he calls a yard. He visits his mother once a week, not just for the free cookies, and enjoys spending time with close friends drinking wine and making up ridiculous things that sometimes show up in his books. Although he hates the process of travel, he does enjoy experiencing new places. His dream trip is to one day visit the country of Greece, and he is currently saving his nickels and dimes to make that a reality.

Twenty years ago he met a man who understood and encouraged his strange, creative mind, who made him laugh more often and more freely than anyone else. They were officially married in November of 2015 and today they still laugh often as they live in a suburb just north of Detroit with their two cats who act as both muse and distraction to him while he writes.