ARC Review: Do Not Disturb by Chris Scully 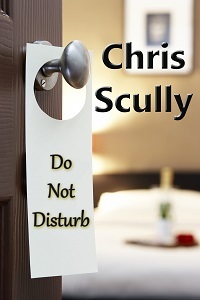 Check-in for a night at the boutique Benton Hotel, where the motto is “we’re not satisfied until you are”, with this collection of three sweet and sexy short stories.
In Watch Me, a hotel clerk makes a surprising discovery about his colleague’s personal life, and an even more unexpected discovery about himself when he borrows a uniform, while a married man looking to spice things up finds a night of passion when he meets a stranger in a hotel pub in Wedded. Finally, in Wanted, a young man exploring his sexuality gets more than he bargained for from his hook-up.

In Watch Me, we meet Win, a night audit clerk who works the overnight shift, and Lucas, his colleague, who works the shift before him. Win is also dealing with his father's Alzheimer's and the realization that he'll have to put him in a home sooner rather than later. Lucas is a bit younger than Win and flirts shamelessly with almost everyone he meets.

The author introduces her characters easily and gives the reader information about them by weaving it effortlessly into narrative and dialogue. And quickly sets up the plot - Win spilled coffee on his suit jacket which necessitates borrowing Lucas' jacket which leads him to find a handwritten note in the jacket pocket which leads him to a website which lets him see something he never expected. Win is also a jealous ass and a bit stupid and a bit closeted, so not only did I get some erotic scenes, but also some real plot. I adored Lucas, who seemed steadfast and not a pushover, and I liked Win well enough to forgive him his stupid jealousy. Written in the first person, past tense, this was a lovely little amuse-bouche.

In Wedded, we meet Dave, married for 25 years, who's sitting in the hotel's bar and just took his wedding band off his finger. He's thinking about Pat, his spouse, and how things with Pat have gotten a bit boring in the sheets after so many years of marriage. He loves Pat, there's no doubt, but he's also in need of a bit of excitement. And the tall and broad-shouldered guy Dave is ogling in the mirror above the bar looks like he might fit the bill to bring back some spice into Dave's life.

While this little ditty is written in the 3rd person, present tense, which fits the mood of the story perfectly, the author again effortlessly weaves in sufficient information about Dave (and Pat) to make him seem like a real person with real desires and needs. Dave is about to embark on a clandestine meeting in one of the hotel's rooms. There's a twist to the story at the end, one which I saw coming, but I didn't mind that at all. What I enjoyed especially was how well the author brought across her characters' almost breathless excitement - super hawt too!

In Wanted, we are introduced to Evan who nearly died in a mall shooting and is now determined to check one huge thing of his bucket list - having sex with a man. See, Evan realizes he's at least bi-curious. Sex with girls is fine, but there's something about a hot, sweaty man. One Craigslist ad later, and Evan is at the hotel bar hoping to meet up with Graham, who answered his ad.

Except Graham is expecting to meet his sister, not another guy, and things are a bit awkward for a little while, and seem to derail before that train has even left the station. Eventually, they do end up in the room Evan has reserved and bi-curious is curious no longer - he's all in.

What I really liked about this story is that throughout their encounter, the two men share more than just bodily fluids. They talk. They confess. They're open and honest, and their connection grows by leaps and bounds. I would LOVE to see more of them, even if it's just a novella. I think there's potential here. Lots of it. How they meet is unconventional, sure, but their story has only just begun. This short is written in the 3rd person, past tense.