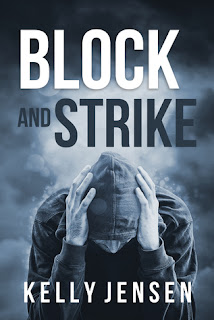 
Jacob Kendricks is three months out of prison, estranged from his daughter, and ready to get his life on track. Taking care of the bum curled up on his doorstep isn’t part of the plan. When he realizes the man has been assaulted, Jake takes him to the hospital, where he learns that Max is his downstairs neighbor… and that he could really use a friend. Keeping Max in the friend-zone would be easier if he wasn’t so damned cute.

Maxwell Wilson has been bullied for years, and the only person who ever cared lives too far away to come to his rescue. Now his upstairs neighbor is offering support. Max remains cautious, suspecting he is little more than a project for the handsome Jake. When he learns Jake has had boyfriends as well as girlfriends, Max has to reevaluate his priorities—and muster the courage to take a chance at love.

Just when a happy future is within their grasp, life knocks them back down. A devastating blow leaves Max lower than ever and Jake wrestling with regret. They both have to find the strength to stand on their own before they can stand together.

A punching bag doesn't fight back.

Long ago, Max decided that it's easier to just take it. His father thought the school bullies had a right to teach him a lesson with their fists. Max is a runner, not a fighter. He hates depending on anyone else and works two jobs to afford his flat, which is really a small, dark cellar.

Max's upstairs neighbor has never noticed him, not until he finds Max bruised and bloody on his doorstep. Jake has problems of his own and does not want to get mixed up in anything, but he can't just leave the guy to die.

Both men want more out of the friendship, but neither wants to disrupt the balance. Jake is bi but doesn't advertise it, and Max is ashamed of being gay; he even has a girlfriend because he craves the companionship (thankfully, she's a keep-your-hands-off-me kind of girl). The girlfriend leaves, but Jake stays.

Block and Strike is a true hurt/comfort book. Max needs to heal physically and emotionally. Jake seems so strong and solid on the outside, but he's been in prison and knows what it's like to be broken.


We don't find out why Jake was in prison for a while. I had such mixed feelings about his sentencing. On the one hand, what he did was brutal; on the other, his actions weren't entirely unfounded and his ex (the mother of his 9-year-old daughter) really betrayed him. Jake's heart was always in the right place. I really loved his character.

The steam level is on the lower end, but the two included scenes are quite sexy. The slow burn was appropriate here; rushing the sex would have forced a relationship that had to develop organically to be believable.

Max certainly doesn't trust easily. But Jake bribes him with food and fast car, and Max can't help but fall in love.

The dual POV worked really well. The men don't communicate as well as they could. Jake doesn't want to spook Max, and Max is used to holding his feelings close. A misunderstanding ensues, and, as is his modus operandi, Max runs and hides. Being in his head helped me understand his reactions.

Two things bothered me: The men who hurt Max get away with it. No one files a complaint. Nothing is done about it. I value justice above mercy, so this made me furious.

While I loved the scenes at the dojo (Jake is a black belt and brings Max to class so he can gain the confidence to defend himself), I found the casual homophobia dolled out by one of the students to be really unnecessary. There was enough external angst without throwing that into the mix.

Thankfully, Jake's family, especially his sister Willa, is all kinds of awesome, so Jake, and eventually Max, have a lot of support. Even so, I wanted a stronger ending. Max makes a lot of progress (I loved that last fireworks scene!), and he and Jake really fit, but an epilogue would have been much appreciated.