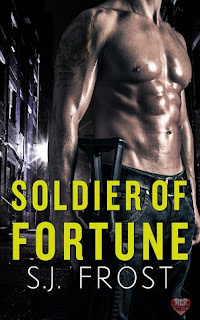 
Mercenary. Gun for hire. Soldier of fortune. That’s Conrad Dane. Maybe he hasn’t always done things the right way in his life, but that doesn’t mean he’s a bad guy. And sometimes, it takes doing the wrong thing, to get the right results. These days, he’s backing out of the underworld, taking more jobs in the open in personal protection. He’s contracted to protect a rising politician and gets more than he expected. Not from bad guys, but from the politician’s son, Lucas.

Lucas likes the good guys, both in his favorite comic book superheroes and the men he forges relationships with. Conrad isn’t the kind of man he goes for, but that’s not stopping Lucas from being drawn to him, wanting to be closer to him.

Conrad and Lucas can’t deny their attraction toward each other. When someone targeting Lucas’s father pulls Lucas into danger as well, Conrad will do whatever it takes to keep Lucas safe.

I read this book because it sounded all badass, and I love the name Conrad.

But Conrad wasn't badass! He was a really flaky mercenary who didn't take his job seriously. He was all jokes and sarcasm, and he drew so much attention to himself. How can you act like that if you're a gun for hire? Isn't the number one rule of mercenaries to lie low?

The first half of the story was kind of fun. Conrad and Lucas, the son of the man who hired Conrad to be his bodyguard, are in total lust. They bicker, but it's all a cover; really, they want to get down and do the wicked horizontal tango.

And they do. Boy, do they EVER. This book is hot, hot, HOTTER! There's not much in the way of foreplay. It's all about the fast and dirty and put your dick in me NOW.

That really worked for me cause I'm a pervy perv like that.

But the mystery? Yeah, not so much.


I figured out who the bad guy was the second he appeared on page, like before he even opened his mouth. It was THAT obvious. And Conrad knew too, but he didn't do much about it.

Throw in a bunch of drama, danger, more sex, and then an abrupt HEA. The MCs barely knew each other at that point, so the HEA just wasn't believable.

This wasn't a terrible book, but it wasn't nearly as exciting as I'd hoped. The climax fell flat, and the characters were very cookie-cutter.

The story was kind of silly and predictable. Plus, guns were glorified. That really bugged. There's nothing cool about killing people.

An copy of this book was provided by the publisher in exchange for an honest review.