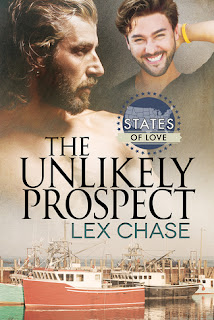 
In Prospect Harbor, Maine, lobsterman Harper Cook has always loved the sea. He and his two brothers work the harbor waters, in a fishing village of one thousand where everybody knows everybody else’s business and nobody wants to be different.

Harper has no desire to ever stand out from the crowd, but Sean persists and earns Harper’s friendship. Through Sean, Harper opens up to new possibilities. Things get steamy, but Harper still protects his heart. Though the right pressure in the right place might crack even a loner lobsterman out of his shell.

The blurb had me at "lobsterman" (ya know, a man who braves the wild seas fishing for those evil creatures with claws) and "pinup calendar" (Because. PINUP. Calendar.)

Lobersterman, you say? A rough, sexy, socially awkward lobsterman posing in the buff (with a lobster serving as his, um, fig leaf)?

Oh, honey, I am ALL over that.

And it gets better: Harper (said lobsterman) is a virgin (!), while the other MC, Sean, is a hot Latino boy from L.A. now teaching first grade in a small town in Maine. (I LOVE Maine in all its stark beauty; the author captures the setting perfectly.)

OMFG, be still my beating heart.


I am ever so glad I gave this book a go. The Unlikely Prospect is an opposites-attract, no angst, sexy story with the best HEA! The two MCs are adorable together, and Harper's two younger brothers, Joe and Danny, are completely hilarious with their teasing and meddling.

Joe and Danny needle Harper until he agrees to pose for a "men of Maine" calendar, the sale of which will raise money for the school where Sean teaches, the school Harper's nieces attend (one of them is even in Sean's class).

Harper is struck mute when he first meets Sean, but that's not an unusual state of affairs. Harper is a man of few words. Sean doesn't care though; he talks enough for the both of them.

The slow burn is delicious, and the way Sean takes care of Harper and introduces him to the joys of the flesh . . . hot damn. LOVED that.

The mild tension comes from Harper being a little afraid to out himself, but everyone in town already knows anyway, and his brothers are incredibly supportive and awesome!

Fortunately, Harper doesn't worry for long. He's tired of being alone with only his hair conditioner for company. He even lets Sean feed him lobster dipped in butter at a diner, which was far sexier than it had any right to be.

Harper writes fantasy stories (he scribbles notes wherever he goes), and he trusts Sean enough to let him read one. There may be an age gap between the men (I guessed Sean to be 30-ish to Harper's 40), but they get along like a house on fire. Sean is just so easygoing and brings Harper out of his shell. No pun intended. ;)

I only wish the story were longer. I blinked, and it was over. We never got to meet the nieces, and there were a couple time jumps where I was all, WAIT, back up, I want more!