ARC Review: The Next Competitor by Keira Andrews 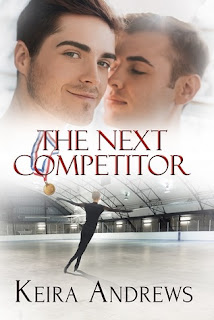 
If he risks his heart, can he keep his head in the game?

To win gold, figure skater Alex Grady must train harder than the competition morning, noon, and night. He’s obsessed with mastering another quadruple jump, and due to the lack of filter between his mouth and brain, doesn’t have a lot of friends. As for a boyfriend, forget it. So what if he’s still a virgin at twenty? The Olympics are only every four years—everything else can wait. Relationships are messy and complicated anyway, and he has zero room in his life for romance.

So it’s ridiculous when Alex finds himself checking out his boring new training mate Matt Savelli. Calm, collected “Captain Cardboard” is a nice guy, but even if Alex had time to date, Matt’s so not his type. Yet beneath Matt’s wholesome surface, there’s a dirty, sexy man who awakens a desire Alex has never experienced and can’t deny…

Alex Grady isn't the easiest guy to like. He's snarky, cocky, and has zero filter; what he thinks, he says, and what he says isn't always nice.

Much of Alex's abrasive personality can be explained by youth and stress. Alex is only 20, and he has a real chance at winning the gold. That's his goal, his prize for training hard and giving up his life to skate.

Alex has a hardass Russian coach whom he followed to Toronto and who pushes him unrelentingly (that's her job after all); a supportive and loving family (his parents rock!); and a crush on the relentlessly nice Canadian pairs skater Matt Savelli (whom he initially refers to as Captain Cardboard).

Alex tells himself he doesn't have time for sex, much less romance, but following a tragedy on the ice, he can't help but me drawn to Matt, who's not boring, or shy, at all. Indeed, Matt has a dirty mouth and is a great kisser. Alex is a virgin, and that turns on Matt even more.

Alex is the narrator of the story, so we're not privy to Matt's thoughts, but he definitely reads like a complex character, with his own fears and ambitions. Matt isn't even out to his family, and he has to work long hours as a server to pay for his skating.


I loved Matt from the get-go, but it took me much longer to warm up to Alex. Alex is a perfectionist, but once he starts seeing Matt, he sort of loses focus. He pushes himself so hard, skating is no longer about joy. The fall is inevitable, and once Alex falls, he falls hard.

The relationship moves from friendship to more, and the awkward almost-kisses are adorable. There were a few smoldering smexy scenes, and I had fun getting to know the secondary characters, especially Kenny the Japanese ice skater. Sadly, Kenny's straight, or I would beg for his story.

The ending was satisfactory if a little anti-climatic. Matt and Alex get a strong HFN, but too many things are left up in the air for me to call this a HEA.

Keira Andrews knows her ice skating. The Next Competitor isn't bogged down with technical details, but the sport comes alive.

This book was a little too NA for me (thus the 4 star rating), but I still enjoyed it and would love to read a follow-up about Matt and Alex set four years down the road at the next Olympics.

It is what you read when you don’t have to that determines what you will be when you can’t help it.