ARC Review: Lane's (Life According to Maps 3) by Nash Summers 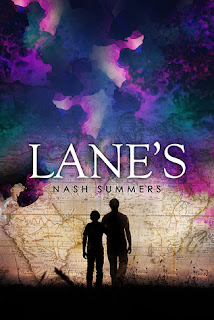 
Maps doesn’t believe in growing up.

He believes in his experiments, Benji’s new driving skills, Perry’s knowledge of “adult things”, and his interstellar boyfriend, Lane.

Because if Maps believed in any of those things, it would mean he was growing up.

And Maps was in love.

So very in love, no other feelings existed. No other love in the entirety of all the galaxies existed because Maps used it all up right then, right there, as Lane whispered wrong lyrics into his ear and stepped on toes.

The melody of the song seemed to last an entire lifetime . . . .


Maps is a romantic at heart.

He's irresistible, charming, brilliant, AND romantic. Is it any wonder his parents don't want him to move out?

Maps' parents encourage him to apply to college, but Maps is scared of leaving Benji, leaving home, leaving LANE. He's in denial.

The title may be Lane's, but this is Maps' story; it's about his fears, his longing, his entirely unrealistic and yet TRUE way of looking at the world.

Do not attempt to read Lane's as a standalone. This series needs to be read in order or you won't understand Maps at all. And that would be a pity. Because Maps is unlike anyone else.


Maps is the kind of boy who stares at t-shirts, not boobs; who wants to crash a party just to say he's done it; who wears flip-flops to the prom. He even makes Lane jealous (unintentionally, of course).

This is a story about young love, FIRST love; it's about finding your way in the world and marching to your own heartbeat.

He kissed Lane because Lane deserved to be kissed now and tomorrow and until the end of time.


Benji and Perry, Maps' BFFs, have their own love/hate thing going on that's utterly hilarious. Benji may like girls, but he sure can't stop talking about Perry.

I'm going with 4 stars because I really wanted more than a kiss this time; there's no steam in the Life According to Maps books, but there's humor and friendship and whimsy.

There were seven billion people in the world, and somehow, the most thoughtful one found his way right next door.


Sometimes that's all you need.

Always read something that will make you look good if you die in the middle of it.