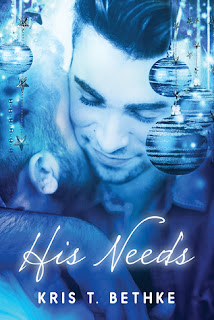 
When State Trooper Travis Kinslow is injured right before Thanksgiving, the only positive is that for once he won’t be working during the holidays. Since he has no family, Travis was absorbed into his best friend, Joe’s, and he considers them as good as his own. Everyone except Joe’s brother Noah. Travis has been in love with the younger man for much of his life, but he’s always kept his distance.

As an ER nurse, Noah is a caretaker by nature. When his brother’s best friend is hurt, he’s happy to help Travis while he heals. He’s only ever allowed himself to think of Travis as the next best thing to an older brother, but by the light of the Christmas tree, Noah finally sees Travis’s true feelings. And in that moment, everything changes.

When faced with opposition and a Christmas nothing like they imagined, will their hopes for the future be enough to carry them through?

His Needs is a warm, sexy holiday romance featuring two of my favorite tropes: friends-to-lovers and hurt/comfort.

When Travis, a state trooper, is clipped by a passing vehicle during a routine traffic stop, he ends up in the ER where his best friend's younger brother is a nurse. Violating every HIPAA regulation, Noah immediately calls his mother, who rushes in to watch over Travis.

Travis is an adopted member of Noah's large Italian family. Travis and Joe have been best friends forever, but it's Noah, Joe's younger brother, who makes Travis's heart beat faster.

Noah takes care of Travis during his medical leave, and Travis can barely stand to be so close to his lifelong love and not touch. When Noah finally sees what's been in front of him all along, he jumps in with both feet.

Travis is the first-person narrator of the story, so we see Noah only through his eyes. I would have loved to get Noah's POV as well. Thankfully, Noah is open and honest with Travis, so we do get to know him. Both the MCs are in their 30s (Travis is 35 to Noah's 31), and they actually act like adults.


The author doesn't skimp on the steam (hello, unfulfilled sexual tension!), and the ending overflows with kisses and sweetness. I should also mention the dirty talk. Oh, yes, there's dirty talk. Noah has quite the mouth on him.

The one thing that didn't work for me is the way Noah's mother reacted when she learned that Travis and Noah were dating. It seemed entirely out of character. This is the only conflict in the story, and Noah and Travis handle it perfectly.

I also could have done without all the references to Mass and religion. Travis and Noah attend Mass twice, which, come on, the Catholic church is not exactly a bastion of gay rights and forward thinking. But Noah IS Italian, so it's sort of a requirement.