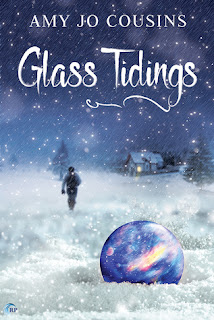 
Eddie Rodrigues doesn’t stay in one place long enough to get attached. The only time he broke that rule, things went south fast. Now he’s on the road again, with barely enough cash in his pocket to hop a bus south after his (sort-of-stolen) car breaks down in the middle of nowhere, Midwest, USA.

He’s fine. He’ll manage. Until he watches that girl get hit by a car and left to die.

Local shop owner Grayson Croft isn’t in the habit of doing people any favors. But even a recluse can’t avoid everyone in a town as small as Clear Lake. And when the cop who played Juliet to your Romeo in the high school play asks you to put up her key witness for the night, you say yes.

But Eddie Rodrigues never sticks around.

Unless a Christmas shop owner who hates the season can show an orphan what it means to have family for the holidays.

What a gorgeous story! I think this might be Amy Jo Cousins' strongest writing to date.

Eddie is a product of the system. He's a drifter and glass artist, making fairies and unicorns to sell at Shakespearean festivals when the weather's warm. In the winter, he heads to Texas. He doesn't own more than he can carry, and he manages just fine.

Gray shuts people out and wallows in loneliness. He owns a Christmas Shoppe, open only during the holiday season, where he sells ornaments and other baubles.

After Eddie witnesses a pedestrian hit and run, the police want him to stay in town until they find the perpetrator. Eddie isn't eager, but Gray makes him an offer he can't refuse. And Eddie likes Gray, likes to wiggle his feet under Gray's warm body while they snuggle under one blanket on the couch.

Gray gets used to Eddie's presence. He wants to do things for Eddie, make Eddie happy. There is a definite attraction between the men, but Gray is shy and careful. Eddie's willing though, and Gray can't resist.


Eddie is 28; Gray is older (40s?). But the age difference isn't an issue. Eddie running away is. He doesn't like to be tied down, and his last boyfriend turned out to be a druggie, not the cozy fantasy Eddie imagined. Eddie runs because he's scared to stay, scared to rely on anyone but himself.

Beneath Eddie's rough, frantic exterior lies a wounded soul. Gray sees that, and Eddie sees Gray's vulnerabilities too. Gray isn't easy to ruffle, but Eddie has a knack for pushing the right buttons. Sometimes Gray buys pizza. Other days, Eddie cooks. Eddie decorates for Christmas, and even though Gray grumbles about it, he's happy.

This is a poignant story about finding home and giving yourself over to love. Both MCs are complex and lovable. The sex is sparse; I wanted a lot more of that. But the ending is hopeful and true.

I loved this book and highly recommend.

Books are lighthouses erected in the great sea of time.