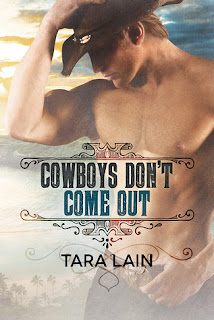 Rand McIntyre settles for good enough. He loves his small California ranch, raising horses, and teaching riding to the kids he adores—but having kids of his own and someone to love means coming out, and that would jeopardize everything he’s built. Then, despite his terror of flying, he goes on a holiday to Hana, Hawaii, with his parents and meets the dark and mysterious Kai Kealoha, a genuine Hawaiian cowboy. Rand takes to Kai’s kid brother and sister as much as he drools over Kai, but the guy sports more prickles than a horned toad and more secrets than the exotic land he comes from.

Kai’s earned his privacy and lives to protect his “kids.” He ought to stay away from the big, handsome cowboy for everyone’s sake—but since the guy’s just a haole on a short vacation, how much damage can he do? When all of Kai’s worst fears and Rand’s darkest nightmares come true at once, there’s not much chance for two cowboys who can’t—or won’t—come out.

I had high hopes for this book because cowboys, and Hawaiian cowboys (panilolos) at that. Or at least Kai is a paniolo. Rand is just a plain ol' California cowboy who runs his own tourist ranch specializing in horse riding lessons.

Rand hates leaving his space (and hates flying even more), but when his parents invite him to spend Christmas with them in Hawaii, he feels obliged to go.

Rand meets Kai on a dance floor, and they spark up a friendship that gets hot and steamy faster than you can say "nudist beach." Soon Rand finds himself spending a lot of time with Kai and Kai's two younger siblings, Lani, who's 12, and Aliki, who's 10.

Kai has been raising the kids on his own and is used to relying on no one but himself. He's prickly and defensive, pushing Rand away even when Rand bends over backwards to help.

I really like the idea of two closeted cowboys falling in love. I don't mind Insta Love stories when they make me believe. This one didn't, not quite. There just wasn't enough spark between the men to justify them falling in love in two weeks.


Even the sex scenes felt kind of rushed and mechanical. I can't remember if the two ever kissed. Probably, but I was missing the romance and tenderness.

Aliki and Lani are sweet kids, but they're a little too perfect, especially Lani who talks like a 30-year-old New Age guru.

In fact, all the secondary characters in this book are AMAZING: Rand's parents, the wise grandma Rand meets on the plane and her daughter, Rand's ranch hands, Julie (a woman Rand invites dancing who won't go away), Kai's two female friends (who serve as dancing props only, minus the time they're naked on the beach, which WHY?).

I could have done without the random melodrama. The scene where Kai and Rand have to fight a crazy ex-husband, and Rand ends up saving Kai from falling to certain death was particularly bizarre and seemed to be there solely to show that Rand would risk his life for Kai. Which he totally does, only to have Kai get all pissy and broody. Kai's good at that.

Despite much eye rolling on my part, this is a mostly sweet story that requires little to no thinking. The HEA is pretty damn sparkling, what with family and togetherness and sacred waterfalls. Also, bamboo forests. (No pandas, though.)

If the crowns of all the kingdoms of Europe were laid down at my feet in exchange for my books . . . I would spurn them all.