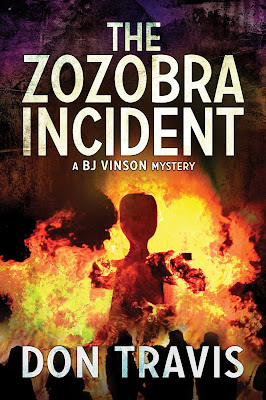 B J Vinson, a former Albuquerque police detective turned confidential investigator, hesitates when ex-lover and now prominent attorney Del Dahlman appeals to him for help in recovering some incriminating photographs of him and the hustler who broke up their relationship. BJ reluctantly agrees to find Emilio Prada, the handsome gigolo who's been using the photographs to impress his clientele-men and women from all strata of Albuquerque society-thinking he'll put the case to rest in a matter of days. However, things turn deadly with a high-profile murder at the Burning of Zozobra on the opening night of the Santa Fe Fiesta, and B J becomes embroiled in a search for missing negatives, a ruthless murderer, and a way to save himself from being next on the killer's list.


Everyone tells me that I’ve got to tell you a little about me and a little about my book. Because my book’s infinitely more interesting than I am, let’s start there. The Zozobra Incident, the first in a mystery series featuring BJ Vinson as a gay Albuquerque confidential investigator, is due out from DSP Publications on Tuesday, November 15 (a red-letter day on my calendar). If all goes according to plan, the second in the series, The Bisti Business, will follow in April 2017, and the third book, The City of Rocks, will see the light of publication about four months later. A fourth, The Lovely Pines, is currently a work in progress. Each novel takes place in a different part of my adopted state of New Mexico, allowing me to paint word pictures of our beautiful landscapes and historical places.

The synopsis for Zozobra reads: B. J. Vinson is a former marine and ex-Albuquerque PD detective turned confidential investigator. Against his better judgment, BJ agrees to find the gay gigolo who was responsible for his breakup with prominent Albuquerque lawyer Del Dahlman and recover some racy photographs from the handsome bastard. The assignment should be fast and simple.

But it quickly becomes clear the hustler isn’t the one making the anonymous demands, and things turn deadly with a high-profile murder at the burning of Zozobra on the first night of the Santa Fe Fiesta. BJ’s search takes him through virtually every stratum of Albuquerque and Santa Fe society, both straight and gay. Before it is over, BJ is uncertain whether Paul Barton, the young man quickly insinuating himself in BJ’s life, is friend or foe. But he knows he’s stepped into something much more serious than a modest blackmail scheme. With Paul and BJ next on the killer’s list, BJ must find a way to put a stop to the death threats once and for all.

The following scene comes in Chapter 1 when Del Dahlman, BJ’s former significant other, comes to BJ’s office to ask for help. They had been a happy couple until Del brought a handsome gay gigolo into the house while BJ was laid up with a serious gunshot wound (which ultimately caused him to leave the Albuquerque Police Department). We pick up the conversation as the two men work around to why Del is in the office.

Bile collected at the base of my throat as I recalled how Del had irrevocably ruptured our relationship by bringing a gay hustler named Emilio Prada into our home. His next words revealed his thoughts were paralleling mine.
“I thought you were just being jealous, but you were more insightful than I was. You saw through Emilio right away.”
“He was a gay for pay. Anyone could see that.”
“Anyone but me. He rang my bell too much. Besides, he’s more gay than straight.” Del shook his head as if trying to clear it. “He’s a beautiful son of a bitch.”
“With ‘son of a bitch’ being the operative axiom. Is he still around, or has he gone back to Mexico?”
“Around… but not with me. In fact, that’s why I’m here.”
My left brain kicked in. “He’s blackmailing you.”
“You always were quick on the uptake.”
“So what’s the problem? Half the town knows you’re gay. Your law partners know, don’t they?”


“Yeah, we’ve used it to our advantage a couple of times. There’s some gay money in this town.” He scratched his chin. “But knowing it and seeing it splashed across the Internet are two different things.”
“Let me guess. He has pictures.”
“Some very nice ones. I was quite proud when he first showed them to me.”
“And now they’ve come back to bite you in the ass.” I smiled at this quirky turn of fate.
“You may think it’s funny, but it’s dead serious to me. I need to get them back. Fast.”
“So go find him and wring his scrawny neck.”
“Not so easy. He’s hiding out somewhere. Everything was fine until we broke up, and then he turned nasty.”
“What happened?”
Delbert David Dahlman, Esquire, attorney-at-law, flushed a bright, vein-popping red. “He… he moved a woman into my apartment.”
I burst out laughing. “Poetic justice.”
“Maybe. Anyway, I gave him a choice. Me or her. He chose her and my pictures.”
“What’s he asking?”
“Five thousand.”
“A modest demand. You’ve given him gifts worth more than that. Like a car, for instance.”
“The five grand is only a confidence builder. He’ll sell me a few photos for that and then come after me for the big money.”
“Crap, man. How could you not see this coming?”
“Love is blind.” He tried to recover his aplomb. “Will you help me?”
“Why not let your firm’s investigators handle it?”
“I don’t want the firm to know. This is in confidence, but I’m up for a full partnership at the end of the year, and this could sink it. I’ll pay you. Just help me out of this jam, okay?”
“Damned right you’ll pay. I’ll bill you like every other client.”
After he forked over a hefty retainer check, I started acting like a professional. “Give me Emilio’s last known address.”
“That would be the Royal Crest, my apartment house.”
“Damn. Do you at least have his phone number?”
“I bought him four cell phones, but he couldn’t hang on to any of them. Kept losing them. The last time I told him that was enough. I wouldn’t foot the bill for another.”
“So no phone number.”
“Right.”
“How was the extortion demand made?”
“I got a note.”
“In his handwriting?”
“Hard to tell. It was printed. You know, in block letters. Emilio used to go through the newspaper, so I know he can read English. But I don’t know if he can write it.”
“Was the demand note sent through the mail?”
“No, it was dropped off at the apartment house.”
“With the doorman?” Del had a swanky address.
“We don’t have a doorman, but it’s a secure facility. It takes a key to get in the front door.”
“So it was just left at the front door?”
“It was stuck in my mailbox. Somebody jammed the corner of the envelope under the door of the mailbox. That’s where I found it. And before you ask, the boxes are in the front lobby.”
“Behind the locked door?”
Del nodded. “I asked the manager if he let anyone in. He said he hadn’t and claimed he didn’t know anything about the note. I suppose someone could have entered when a tenant went out. Or maybe he sneaked in through the garage when a car was entering or leaving.”
“Do you need a key to exit the front door?”
“No, just turn the handle and you’re outside.”
“Tell me about the people who operate the apartment house. The manager, maintenance people, housekeepers, people like that.”
He gave me personal names when he had them and company names when he didn’t. I laid the list aside to check out later. “Let me see the note and envelope.”
His mouth tightened. He licked his lips. “I don’t have them. I was so angry, I tore them up as soon as I read the note. He didn’t sign the thing, but it had to be Emilio. Nobody else has those pictures. Hell, just go find him and get them back. You don’t need to see the note for that.”
I got in a few more questions before he claimed he needed to get back to the office to prepare for court. More likely he wanted to get away because of my irritation at his stupid handling of the demand note. That was all right; I was almost late for a court date of my own.
Later, as I chuckled my way through the metal detector at the district courthouse, the deputies operating the security station must have thought I’d lost my marbles. In fact, during my sworn testimony—authenticating some videotapes I’d taken—I had a sudden image of Del’s face as he told his story, and almost snorted aloud.
I would have had a hell of a time explaining to the judge why Wilbur Maple’s embezzlement of $100,000 from a charitable trust was funny. Nonetheless, for the remainder of the afternoon, I savored the bittersweet irony of Del’s predicament.

Born in rural Oklahoma, I graduated from a university in Texas with a degree in government and history. How did I plan on making a living off it? I don’t know, but somehow after a stint in the US Army, I found gainful employment in various pursuits. My degree did, however, cement one thing in my mind: an interest in history. I hope that comes through in my work.

I do a weekly blog centering on my writing and my personal foibles at dontravis.com. A member of SouthWest Writers, New Mexico’s largest writing association, I teach a writing class at one of Albuquerque’s multigenerational centers.