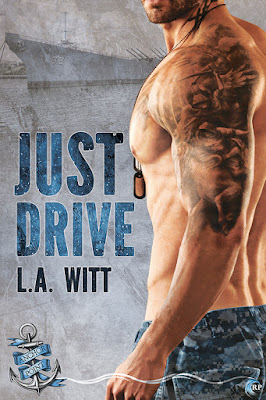 For Sean Wright, driving a cab in the tiny Navy town of Anchor Point isn’t an exciting job . . . until he picks up just-dumped Paul Richards. A drive turns into a walk on the pier, which turns into the hottest hookup Sean’s had in ages.

After a long overdue breakup, Paul can’t believe his luck. Of all the drivers, he’s picked up by the gorgeous, gay, and very willing Sean. Younger guys aren’t usually his thing, but Paul can’t resist.

One taste and neither man can get enough . . . right up until they realize that Paul is Sean’s father’s commanding officer and the last man Sean should be involved with.

With two careers on the line, their only option is to back off. It’s not easy, though; the sex and the emotional connection are exactly what both men have been craving for a long time. But Paul has devoted twenty-four years to his career and his dream of making admiral. If he’s caught with Sean, that’s all over. He has to choose—stay the course, or trade it all for the man who drove off with his heart.

This is one of the best L.A. Witt books I've read in a long time.

I loved the two MCs and the chemistry between them. What begins as a one-night stand turns into something more. Even when Sean and Paul figure out that Paul is Sean's father's commanding officer, they can't stay away from each other.

Paul craves Sean more than he craves nicotine. And Sean is tired of the Navy taking over his life.

There is no manufactured drama, no fake angst. The men are amazing together, yet the relationship seems doomed from the start because it breaks all the rules.

Maybe some rules are meant to be broken.

- HEA (which required sacrifice and made the epilogue that much sweeter)

- Paul's friend Trevor, whose story is next!

- Sean's dad, who really came through in the end.

- I wanted to know more about both men outside the relationship vortex: What is Sean studying? Does Paul ever talk to his family?


- The way the men talked around their ages was just weird. I found inconsistencies that had me scratching my head.

My niggles are relatively minor, though.

Just Drive is a very sexy, relationship-focused story about a tatted up silver fox and the one man who makes him realize there's more to life than the military.

I couldn't put this one down and can't wait for book 2.

** A free copy of this book was provided via Netgalley for review.**

L.A. Witt is an abnormal M/M romance writer who has finally been released from the purgatorial corn maze of Omaha, Nebraska, and now spends her time on the southwestern coast of Spain. In between wondering how she didn’t lose her mind in Omaha, she explores the country with her husband, several clairvoyant hamsters, and an ever-growing herd of rabid plot bunnies. She also has substantially more time on her hands these days, as she has recruited a small army of mercenaries to search South America for her nemesis, romance author Lauren Gallagher, but don’t tell Lauren. And definitely don’t tell Lori A. Witt or Ann Gallagher. Neither of those twits can keep their mouths shut . . .

To celebrate the release of Just Drive, one lucky winner will receive their choice of two eBooks off L.A. Witt’s backlist (excluding Just Drive and Afraid to Fly) and a $10 Riptide Publishing credit! Leave a comment with your contact info to enter the contest. Entries close at midnight, Eastern time, on November 26, 2016. Contest is NOT restricted to U.S. entries. Thanks for following the tour, and don’t forget to leave your contact info!