Blogtour: A Country Boy At Heart by M.A. Church

A Country Boy At Heart

Can two young men who are complete opposites overcome their differences and fall in love?
All anybody had talked about for years was the opening of the Bass Pro shop in the Memphis Pyramid. It took forever, but eventually the grand opening date with was within sight. People from the tri-state area were excited, including Nick. He and his best friend made plans to attend after seeing the virtual tour.
Showcased in the middle of the new store was a magnificent twenty-eight story freestanding glass elevator. That was the first thing he planned to do when he got there. It was all a country boy could wish for; a contained city with all your hunting and fishing needs.
Sandy, a city boy, preferred the city. He lived in downtown Memphis for a reason! He loved the energy there. Stuck in a car on the way to the Memphis Pyramid for the grand opening at Bass Pro Shop, Sandy wondered yet again how he’d managed to get talked into this.
He wasn’t a hunter. Killing Bambi was not on his list of things to do. Nor a fisherman. Fishing for compliments was the only fishing he was interested in. He wasn’t what anyone would call a country boy. He didn’t know the difference between a crosswind and a crossbow. The country was fun to look at, but that was all. He preferred to do it from a safe distance.
Little did he know all that was going to change due to a tall freaking glass elevator and high school crush who was now taking a second look at him. One small moment of panic when trapped in the glass elevator with Nick led to a spark of something between them neither expected to find on their trip to Bass Pro Shops. But can they get beyond their differences? Can a city boy fall in love with a country boy? 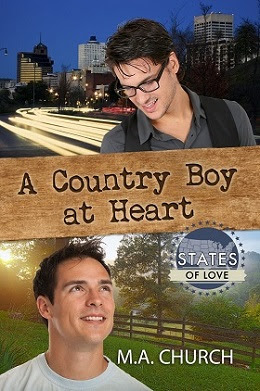 Hot damn, what more could a country boy want? Bass Pro Shop is finally opening in Tennessee. Nick plans to check out all twelve indoor acres chock-full of hunting, fishing, and boating in the Memphis Pyramid on the Mississippi River.

City boy Sandy wonders yet again how he let himself get talked into attending a grand opening for a hick hunting store. His geeky heart prefers the energy of the city. Little does he know all that is going to change due to a freakishly tall glass elevator—and Nick, the high-school crush who’s suddenly taking a second look at him.

A moment of panic while trapped in the elevator leads to a spark neither expected. Getting out is the least of the challenges they’ll face if they want to try to put their differences aside and find out if love is possible between a city boy and a country boy.


AHHHHH WHHAAAAAHH whahhh whhhhaaaa!
“Oh my God, is that a woman screaming?”
Nick barely resisted rolling his eyes. Could the wedding guests not tell the sound came from the giant bird currently displaying his magnificent feathers as he strutted? The peacock did a little dance, squawked again, and then stopped.
Oh. Oh damn, that’s not good. It turned its head, almost as if searching for him. He swore he saw an evil gleam in its eyes. Okay, now what? He tried to sidle farther back out of the way, but the tiny woman who stood at five feet nothing even in those lethally spiked heels clamped onto his elbow.
He winced. Jesus, she’s got a grip on her. He wasn’t sure which of the two—her or the ornate wall mount—concerned him most. Yeah, right. Nick eyed the ornery bird. Mister Peacock and he had been in an ongoing battle for supremacy for the last several years.
Damn. What was the menace on two legs doing now? Oh fuck, it spotted me. It made a funny sound, then shook its body. If he didn’t know better, he would’ve sworn it smiled when it spotted him. It certainly tossed its head as it… oh, shit.
Literally.
The wedding coordinator grabbed the back of Nick’s shirt and yanked, hard. What the hell did she eat for breakfast? He stumbled backward, and only sheer luck kept him from going down on his ass. The peacock squawked again—only this time it sounded like laughter.
“Your peacock just shit all over the runner! The runner that leads to the trellis! That’s where the pastor is going to marry them!” she whispered furiously.
While he thought that lovely shade of fire-engine red was an interesting color for her, he was a little concerned. He didn’t have time for yet another apocalyptic temper tantrum.
As tempted as he was to cover his ears, he was afraid that would get them boxed by Mrs. Big City Wedding Planner. Why didn’t the lady comprehend wild animals were wild and tended to shit whenever the urge hit? Although he did wonder if it did that just to spite him.
“Both Rob and I tried to explain to you that could happen, Mrs. Smith,” Nick whispered fiercely back to her. “Several times over, as a matter of fact, and in several different ways.”
Fat lot of good it did. The woman refused to budge. The bride’s colors were the same beautiful iridescent blues and greens that were in the peacock feathers, and she just had to have a peacock walking down the runner before her.
Rob, or Robert Gatlin, was actually the owner’s son. Dr. Ernie Gatlin had recently retired from his medical practice, and he and the missus planned to do some traveling, so he’d turned operations of the farm completely over to Robert.
Nick scratched his head as he stared at the steaming pile of shit on the stark white runner, as did several horrified wedding guests who’d already been seated. “What do you want me to do?”

“Go get it!” Mrs. Smith exclaimed as quietly as she could.
“Um, okay. The shi… I mean the poop, right? Ah….” Nick took a step back from the wedding planner, whose eyes were bulging. “Do you have anything I can use to—”
The sound that came out of the tiny woman next to him made his hair stand up. Which was quite a feat, considering his hair was short. Man, even the peacock hadn’t sounded that deranged.
“O-oh, okay, then. Wow.” He assumed she meant for him to get the poop, but now he wasn’t so sure. “Ah, guess not. I’m open to suggestions, just in case, you know, you got any.”
Mrs. Smith fanned her face, her eyes promising death, as she hysterically tapped the headphones she wore. “Art? Art? Are you there? Come in. Come in. Oh my God, sweetie, please answer.”
Seeing an opportunity to escape, he edged away from the wedding planner.
Mrs. Smith grabbed Nick by his shirt again and jerked him down to her level. “You listen to me, young man. Go get that runner out of there right now. That bride’s wedding gown cost ten thousand dollars, and I am not having her walk across bird shit just to get to the altar. Ten thousand dollars. Do you understand that?”
Nick gulped. Ten thousand? Who the hell spent that kind of money on a dress? Was the bride insane along with her wedding planner? No, he didn’t understand that. Not for clothing. Now, for a four-wheeler? Oh yeah, he’d drop that kind of cash on a four-wheeler in a heartbeat.
Once Mrs. Smith released him, Nick raced out there and shooed the bird out of the way. He quickly removed the runner, hissing only slightly when Mister Peacock pecked him on the ass. Damn pain-in-the-ass bird. He was going to pluck the bastard clean one day. He stood, and the peacock pranced out of his way.
Smart bird.
Art, the guy Mrs. Smith had been harping at on her headset, magically appeared right behind Nick, laying down a new runner. This runner wasn’t as spiffy as the first one, but it was missing a very important element in its design—peacock poop.
Nick pulled Mister Peacock’s favorite treat out of his pocket and held it out. Luck was on Nick’s side. The birdbrain followed Nick back to its pen. He threw the treat inside, and Mister Peacock followed after it, no problem. Of course. It preened, looking entirely too pleased with itself. Stupid bird was going to be the death of him, if he didn’t kill it first. Okay, he was joking. Sort of. Maybe.
“Blasted pain-in-the-ass bird,” he muttered as the first sounds of the wedding march drifted to him.
“Ahhhhh whhaaaaahh whahhh whhhhaaaa!”
“Right back at you, you overgrown dust buster.” Nick sincerely hoped no more birds shit on this damn event.
Springtime was their busy time for weddings. The dogwoods were in bloom all over the farm, the weather hadn’t turned melt-your-face-off hot yet, and the air carried the fragrant scent of flowers. Even though it was just the end of April, he was still sweating buckets.
The standing joke was that if you didn’t like Memphis weather, just wait thirty minutes and it would change. They’d already had a few days with the temperature pushing ninety degrees. The humidity wasn’t bad yet, but it was coming. By August the humidity would be as thick as his aunt Sally’s soup and just as deadly. 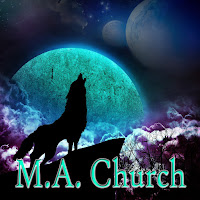 M.A. Church is a true Southern belle who spent many years in the elementary education sector. Now she spends her days lost in fantasy worlds, arguing with hardheaded aliens on far-off planets, herding her numerous shifters, or trying to tempt her country boys away from their fishing poles. It’s a full time job, but hey, someone’s gotta do it!

When not writing, she’s on the back porch tending to the demanding wildlife around the pond in the backyard. The ducks are very outspoken. She’s married to her high school sweetheart, and they have two grown children.