Today we shine the spotlight on Casey Cameron and 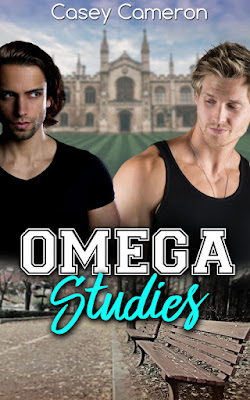 Matt Guerrero is ready for the freedom that college brings: freedom from his controlling family, and from the pressures of being an omega in an alpha's world. So when the school assigns him an alpha "mentor," he can think of nothing he wants less than a mandatory babysitter...no matter how hot the guy is.

Derek Fisher is just trying to play it safe after a big mistake almost cost him everything last year, but it's hard to keep his head down when his assigned omega keeps making trouble. He's never been into guys before, but he can't deny Matt is attractive, smart, and funny, and spending time with him is more than a little distracting. Derek wants more, but giving in to his desires could put everything at risk all over again.

When Matt uncovers a plot that could tear the school apart, he's all in--on fighting it, and on his relationship with Derek. Derek won't let him do it alone, but they're going to have to fight the school administration, their classmates' prejudices, and a ghost from Derek's past before they can be together the way Derek truly wants: as alpha and omega.

When Matt got to his room, Lisa was sitting on his bed while she listened to Jesse, draped dramatically over his own bed, espouse on the many virtues of his assigned alpha.

“...so then he just turned around, walked back into the bookstore, and bought me an umbrella! It’s a cheap five-dollar piece of junk, but I’m going to treasure it forever,” Jesse said with a dreamy sigh.

As Matt closed the door, the umbrella, which had been propped up against the wall to dry, clattered to the floor, and Jesse gasped. “Better treasure it a little more carefully,” Matt said, standing it back up. “Doesn’t your alpha’s first gift have special significance? What does a five-buck umbrella say?”

Jesse gave her a lascivious grin. “It means he wants to get me all wet.”

Lisa and Matt both groaned. Matt flopped down on the bed next to Lisa and kicked off his shoes. “I take it things went well with...what was his name?”

“I haven’t caught his name yet,” Lisa said with a sigh, “but according to Jesse, he’s God’s gift to omegas, even though he doesn’t seem to know anything else about the guy besides the fact that he’s a sexy alpha.”

Jesse let out another long sigh and started ticking off points on his fingers as he talked. “His name is Paul, he’s Filipino, he’s hot, he’s funny, he loves dogs and kids, he’s hot, he’s single, he’s on the hockey team, he’s a literature major, and have I mentioned he’s hot?”

Matt shrugged. “I guess, but is he hot?”

“So hot,” Jesse groaned into his pillow, pressing it against his face like he was trying to smother himself.

“How about you?” Lisa asked over Jesse’s whimpers. “Did everything go okay with your ‘alpha mentor?’” She didn’t actually roll her eyes and make air quotes, but Matt could hear them in her voice. Not for the first time, Matt felt grateful that he had friends who saw things the way he did.

Lisa’s expression was one of wide-eyed worry. “Why? What did he do?”

“Nothing,” Matt said with a sigh, “but that’s kind of the problem.” Jesse pulled the pillow a few inches off his face and raised one eyebrow. “He was checking me out; he definitely wanted to do something.”

“Wait, I’m confused,” Lisa said. “Did you want him to do something? I thought you hated that he even exists.”

“No!” Matt pinched the bridge of his nose. “Well, maybe. But he’s kind of a dick. I mean, he thinks omegas belong barefoot and pregnant in the kitchen. Plus, I kind of think he’s straight. At least, if he’s gay or bi or whatever, he’s not out. He was doing the whole alpha scenting thing, but he didn’t look happy about it.”

“Ooh,” Jesse said excitedly, “you can show him our mysterious ways! Let him taste the rainbow.”

Lisa laughed so hard she started coughing, and Matt had to thump her on the back to get her to settle back down. “I let a couple guys ‘taste the rainbow’ before,” he said, and Lisa snickered again, “and it didn’t go well. I’m done letting straight alpha boys use me as their big gay experiment. Especially if he’s closeted. I don't care how hot he is—he’s not worth the trouble.”

“Like the sun,” Matt admitted emphatically, his head falling backwards with a soft thump against the mattress. “Like a human personification of the sun who works out every day by benching other, smaller suns.”

“Well, you know what my advice is going to be,” Lisa said with a shrug.

“Ugh, is this another of your annoyingly mature ‘just talk to him’ speeches?”


“Oh, good—I don’t have to waste my breath.” Lisa patted Matt on the shoulder. “Seriously, you could be reading it completely wrong—maybe he was uncomfortable about going all alpha on you because he knew you wouldn’t be thrilled about it. Give the guy the benefit of the doubt.”

Matt frowned. Derek hadn’t been that bad, it was true, but the way he’d talked about omegas not knowing what was best for them gnawed at him. “I’m not sure he deserves the benefit of the doubt. He made his viewpoints pretty clear.”

Lisa shrugged. “Fine, then just stew here in sexual frustration. Maybe Jesse will lend you his pillow to smother yourself with.”

“Sounds good,” Matt said, giving Lisa a thumbs-up and a broad, insincere smile. He caught a glimpse of her smirk as Jesse’s pillow sailed across the room and smacked him in the face.

Message from the author:


Thank you so much to My Fiction Nook for having me here! I'm very excited about the release of Omega Studies—it's my first full-length novel, and it was a challenge to write at times, but I'm incredibly happy with the finished product, and I hope you will be, too.

This is my first book set at Maxwell Hart University, and while I don't have concrete plans to turn it into a series, I would very much like to revisit the school in another book. In Omega Studies, MHU starts out already in a state of transition, as it's the product of two universities combining: Louis Maxwell University, a rather old-fashioned school for alpha and beta students; and Elodie Hart Omega Academy, a top-rated all-omega school. During the events of Omega Studies, there's some serious upheaval in the already-chaotic school, and I would really like to explore in a later book how those events change things for the students.

Of course, it's not the school that makes the book compelling—it's the characters! Matt and Derek get their happy ending in Omega Studies, but they might have another story in them. If you're a fan of Jesse and Paul, they may appear briefly in a later book, but I don't think they'll feature in their own story—I love them both dearly, and I don't think I could bear to give them anything but a lifetime of happiness and satisfying but ultimately uninteresting sex.

But the good news is that there are a couple thousand other students at MHU—not to mention the faculty—and plenty of opportunities for interesting (and hot) stories to tell. Let me know what you liked most about Omega Studies, and maybe you'll get to see more of it in a later book!

Promotional post. Materials provided by the author.
Posted by Sandra at 12:00 PM