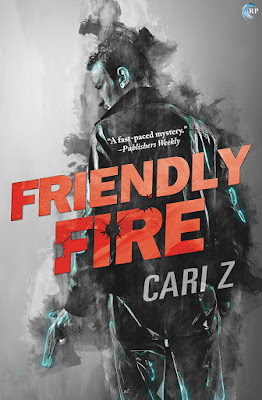 Elliot McKenzie is the king of reinvention. Five years after losing his job and his lover and almost going to prison, his self-help program, Charmed Life, is more successful than he’d ever dreamed. He thinks he’s put his sordid past firmly behind him, until he starts receiving cryptic threats . . . and realizes it might not be as over as he’d hoped.

Security expert Lennox West has been lost since a deadly skirmish in Afghanistan led to his forced retirement from the Army. His PTSD makes helping his ex raise their daughter a challenge. When his ex’s sister asks him to set her boss up with a security system, Lennox isn’t expecting anyone like Elliot McKenzie—a man who captures his attention and makes him feel relaxed for the first time since leaving the service.

But Elliot is dangerously stubborn. Even as the threats against him escalate, he refuses to involve the police, and Lennox fears that stubbornness could kill him. A battle of wills ensues that brings them closer to each other than either man expected. But if the threats turn real, they might not live long enough to get their future together.

Cari enjoys a wide range of literary genres, from the classics (get 'im, Ahab) to science fiction and fantasy of all types, to historical fiction and reference materials (no, seriously, there are so many great encyclopedias out there). She writes in a wide range of genres as well, but somehow 90% of what she produces ends up falling into the broad and exciting category of m/m erotica. There’s a sprinkling of f/m and f/f and even m/f/m in her repertoire, but her true love is man love. And there's a lot of love to go around.

Cari has published short stories, novellas, and novels with numerous print and e-presses, and she also offers up a tremendous amount of free content on Literotica.com, under the name Carizabeth.

Connect with Cari on her website or her blog.

To celebrate the release of Friendly Fire, one lucky winner will receive a copy of Friendly Fire signed by Cari Z! Leave a comment with your contact info to enter the contest. Entries close at midnight, Eastern time, on October 22, 2016. Contest is NOT restricted to U.S. entries. Thanks for following the tour, and don’t forget to leave your contact info!