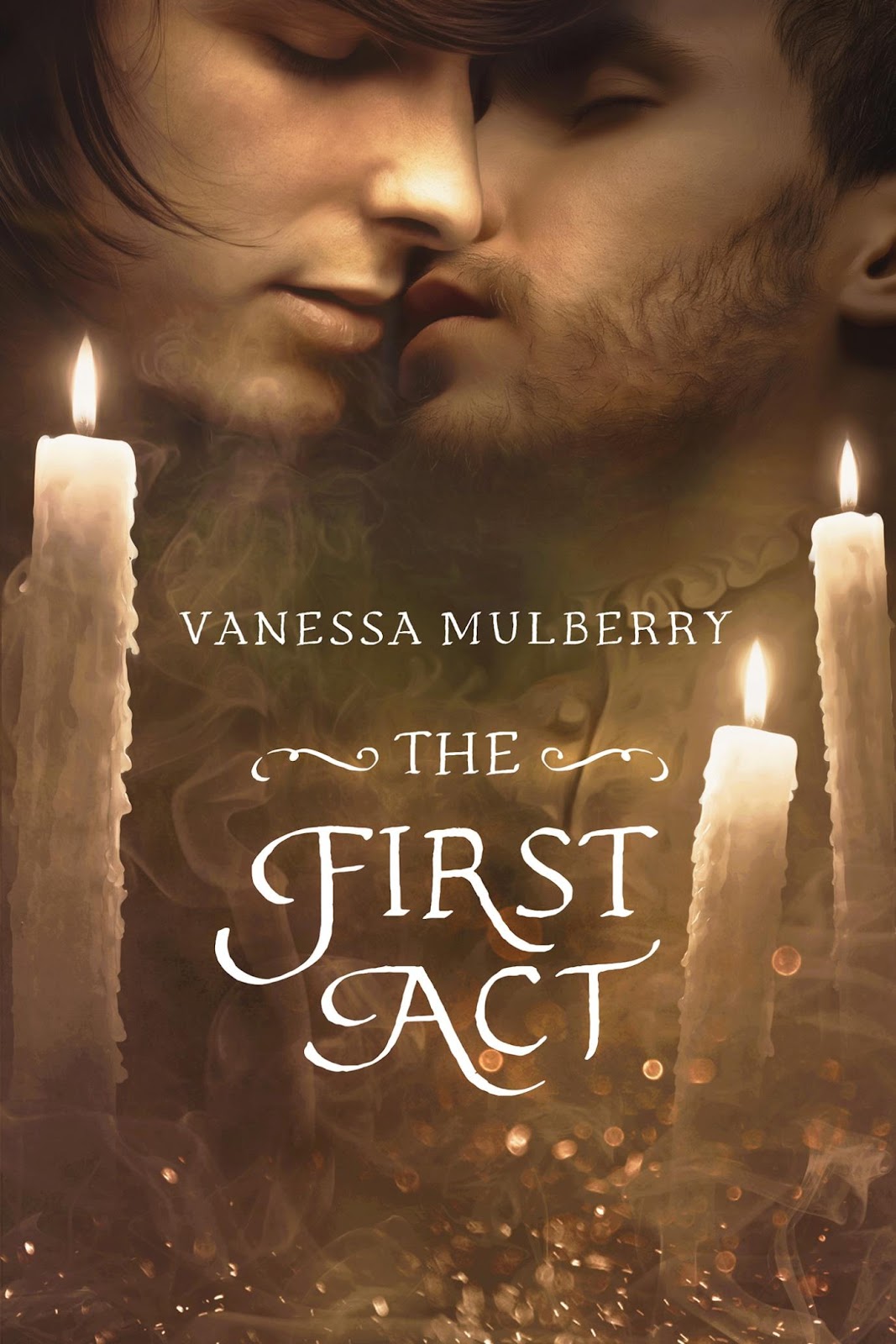 April 1594. William Moodie thinks he’s in love with celebrated actor, Richard Brasyer. When Brasyer’s playing company, Goldfox’s Men, comes to town, William is only too willing to leave his country life for the opportunities of the theater and a life in London. Determined to become Richard’s apprentice, William seeks to impress his mentor with his acting—and please him in bed.

Meanwhile, Richard struggles to escape his past as a spy and disentangle himself from the manipulations of his former master and ex-lover, Bennett Goldfox. Swearing off a relationship with his new apprentice proves difficult for Richard, as William uses all his youthful charms to seduce him. When Bennett’s life is threatened, Richard is lured back into the game for one final mission, and he and William travel to Cambridge to hunt down a list of traitors to the Crown.

In the midst of danger and deception, Richard and William come to truly see each other, faults and all, and realize their feelings run deeper than either expected.

Back in their room at the inn, Richard sat on the bed and patted the space next to him, but William hung by the door, not tempted by the position. Perhaps he was serious about leaving, after all.

“I don’t expect you to go,” Richard said simply. “You have talent. You could make a good job of this if you stay. I must confess also that I enjoyed being on stage with you this afternoon.”

That was as much as he could safely say without lying to William or leading him on.

William bit his lip, but he didn’t move even a step. “Will I remain your apprentice?”

“Yes, for a few years. When that is done, if you have the means, you can buy a share in the company, and you might become a moneyed man. It would be unfair not to remind you this is your best hope to make something of yourself. You’re too old to apprentice elsewhere, and no one else will take you for free.”

William stared at the floor and appeared to consider Richard’s words. Then he approached slowly and sat next to him on the bed. “You’re right; staying is the sensible thing to do, but my heart has no sense at all, and I must think of that too. The kiss on the stage… it was nothing like I was expecting. For a moment, I thought that…. You have to tell me, will there ever be night work?”

Richard couldn’t help himself, and he chuckled. “I’ll not pay you any more than I paid Nick, if that’s what you’re asking.”

William remained deadly serious. “Do not mock me. I need to know if there will ever be more between us, even if it’s just kisses.”

There might be more, one day, if William’s heart cooled or Richard’s grew warmer, but how could Richard explain that to him? Better to keep William’s expectations low and avoid disappointment. “There will be plenty of kisses every day on the stage for the next few months, if you want them.”

“Want them? Have I not risked enough to show you? I have been in love with you for more than a year. I’d wait all season for you to arrive, and every time I saw you, I loved you a little more. I’ll stay for the kisses, but I want to rehearse them in your bed.”

William’s words were heartfelt, that was obvious enough, but Richard didn’t want to believe he truly meant it. The passions of youth were the strongest, but they were also the most fleeting, and built upon the weakest foundations. William wasn’t the only one with a heart to break.

“You are as sweet-savored as you are sweet-faced, and you know I am tempted. More than tempted, even—I could not lie to you about that. I will admit I enjoyed kissing you, and you felt my desire for you last night, but you barely know me, and I know you not at all. You would not love me if you understood my character. I am only decent enough not to promise you a love affair that might not last.”

William stood and looked down at him, putting himself in the position of power. He wasn’t listening; Richard had seen the change in him when he admitted again that William tempted him. Beyond that, William appeared to hear nothing.

“I know all I need. My body aches for you to touch me. Isn’t that love?”

Richard laughed again, though it was gentle, not mocking. “It is not. That is lust, and it is a far more unruly emotion.” He couldn’t help himself as he continued, “Nevertheless, it’s often where love starts.”

“You lust after me, don’t you?” William asked, lips curling into a smug grin. He was playful again now he believed he might get somewhere.

Richard looked him up and down slowly, too weak to pretend he didn’t want the lad. “I’m not blind. I’ve been lusting after you from the moment I saw you, and that is no exaggeration.”

“So you may fall in love with me soon enough if you give in to your craving for my body?”


“And you may find that when you’ve satisfied your desire for me, you feel nothing.”

“It would be foolish not to find out,” William whispered as he climbed onto Richard’s lap and kissed him.

The trembling was gone. After the kisses on the stage, William was as confident as any of Richard’s other lovers.

Richard fell back onto the bed, pulling William down with him. He knew he should stop this, but he couldn’t. All he could do was hope Geoffrey wouldn’t find out.

The bed creaked beneath them as Richard rolled over and on top of William. Pulling away from the lad’s lips, he placed kisses on his jaw, then his neck.

“Lower,” William moaned, pressing upon Richard’s shoulders, trying to force him down his body. “Or give me your hand at least. I’m going to burst.”

It was the lad’s first time.

Vanessa Mulberry has been reading and writing since she learnt to read and write. She has been an MM romance reader for a decade now and took up writing the genre because she loves happy endings and, ahem, happy endings. Her hobbies include Gin and Tonic.

She lives in Buckinghamshire (which is significantly less posh than it sounds) with her long-suffering husband and their adorable daughter.