Hello everyone. Thank you to My Fiction Nook for hosting me today. I'm excited to share "Ethan" with you. 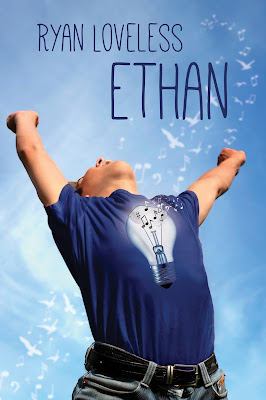 Carter Stevenson is looking forward to a fresh start in a new high school on the other side of the country. It’ll give him a chance to escape his reputation for twitching and stuttering. He’ll have the summer to himself in his new home in California, and in the fall, he won’t get involved in any activity that puts his Tourette’s center stage. He won’t stand out as different.

But his new neighbor, Ethan, isn’t just going to change his plans. He’s going to change Carter’s life. Ethan Hart is recovering from a traumatic brain injury, but it doesn’t dampen his enthusiasm or love for life. As soon as he sees Carter, who moves like the music Ethan sees between the clouds and the grass, he’s determined to become his friend, and then his boyfriend. And even if his parents say their romance can’t get physical, Ethan won’t let it stand in the way of falling in love.

Stepping into the spotlight was the last thing Carter ever wanted, but Ethan, along with a group of friends who like him just the way he is—tics and all—starts to change his mind.


Adapted as a YA edition of the award-winning novel Ethan, Who Loved Carter by Ryan Loveless.


I was never happier, not in my whole life. Carter’s music was amazing on his guitar. I sat on the couch while Carter sat in a chair, but as Carter kept playing, I scooted closer and closer until I sat at Carter’s feet. I bet if I told Carter about my music, like I heard it in my head, Carter could play it. I closed my eyes and swayed. When I opened them, Carter was grinning at me. I grinned back. It was good to enjoy music with someone, especially someone as cute as Carter. He had short brown hair that stuck up in the back, like mine did when I was younger, and freckles over his nose—I had freckles everywhere; I didn’t care for mine much, but I liked Carter’s—and strong arms. I watched Carter’s biceps as he played.
“Keep singing,” Carter said. “You’re really good.”
I hadn’t realized I was singing, but it was one of my favorite things to do. At Temple, I liked to sing with the congregation, and I always sang around the house. My favorite song right now was “Shake it Off” by Taylor Swift. I didn’t get the words right all the time, especially on fast songs because I needed to think about them—not only what the words were but also how to make them with my mouth.
“I don’t know the words.” I’d been singing “la.”
“This song doesn’t have words yet.” Carter kept strumming as he talked.
“So I can make them up?”
“If you want.”
I thought about it. Music carried me away most of the time. If I closed my eyes and followed it, I usually came up with something. I tried it. “Singing with Carter and he’s got his guitar, singing with Carter like the cool dudes we are.”
Carter chuckled. “That’s good. Keep going.”
I grinned. I liked this too. “Carter’s got a cool name and he’s a cool guy. Making music with him is pretty all right.”
Carter mouthed “Thanks,” and laughed, so I sang more. Carter scooted to the edge of the chair as he played, so near to the lip that I thought he would fall off. Carter closed his eyes, just like I had, and swayed his head like he was thinking of something wonderful. I sang my best for him. When I ran out of words, I repeated verses.
“Making music with him is pretty all right.” I belted out the end of the song as Carter made the guitar wail with passion that I felt deep in my gut. It was like the music I always had inside me had married to the music I always heard outside and settled in me and exploded. It was amazing and wonderful and so overwhelming I didn’t know what to do. I sat on my heels, panting, and stared at Carter.
Carter’s lips were open like he was breathless too. He put the guitar down and vaulted off the chair, but I didn’t understand what was happening until Carter landed in my lap and put his hands in my hair. Carter was warm and heavy, but he felt so nice. I grabbed Carter’s back as Carter’s mouth touched mine. Carter kissed me. I felt great all over, from my hands to my mouth to my belly and definitely my penis. I kissed Carter back, hearing Carter say my name, which sounded great!
But then Carter stopped kissing me and flung himself backward like I was a hot oven. I touched my mouth. Carter’s spit wetted my lips. I watched Carter’s chest rise and fall as Carter made deep breaths. I felt warm too, like I needed a glass of water.
“Ethan, I am so sorry. I shouldn’t have duh, shouldn’t have duh duh—” Carter scrambled to his feet. He scratched words like Elliot’s CD that I had dropped at the pool scratched music when he played it afterward, and his face scrunched up. I wanted to hug him because he looked upset, but he was across the room. “—done that,” Carter forced out. It was the first time he’d had trouble with words since I came over. It was still music, but I could tell Carter didn’t like that kind, so I didn’t like it either.
“I saw you with your shirt off when you moved in and my penis got hard and I made semen.” I clapped my hands over my mouth.
Carter’s jaw wagged a few times before he sputtered, “Ethan, I don’t, I mean, I’ve never, uh, uh.” He twitched with each sound. “W-why did you tell me that?”
I wrapped my arms around my chest to protect himself. “I don’t know. I’m not supposed to say that to people.” I stood up, even though I felt dizzy. If I went to hide in the bathroom, there wasn’t anyone to come in and comfort me this time. “I’m sorry.”
Carter came toward me. I flinched when Carter touched my arms. Instead of making me look him in the eyes like Dad would do, Carter stepped back. “You don’t have to be sorry.”
“I’m not supposed to tell people when I do that,” I repeated, in case he didn’t understand. “It’s okay in private, but I’m not supposed to talk about it.”
“Ethan. You can talk about it to me. I’m sorry I got a little freaked out, but I’m not used to anyone talking about… that. Sex, I mean. Getting turned on because of me.”
I looked at Carter through a side glance, not ready to face him full-on. “You don’t mind that I made semen because of you? Does that mean you’re gay too?”

I never saw anybody turn red like that. It took over Carter’s skin color from his neck up to his ears. “I… I… I….” Carter squeezed his eyes shut, but the music in him flung his hands into the air. “Yes, I’m gay.”
“You’re really cute,” I said. “And I like you a lot. I knew I would as soon as I saw you.”
Carter’s eyes sprang open. I gave him what Dad called my “1000-watt” smile. “I like… like you too, but this is a lot to tuh-t-take in right now. Can I….” He stomped his feet, one two, but the carpet muffled the sound. “Can I walk you home? It’s almost seven anyway.”
“We’re still friends?” If we weren’t, I didn’t know what I’d do.
“Yes.” Carter smiled and his arms swung loose from where he’d crossed them over his chest.
“Okay.” I shouldn’t have worried. Carter had brought me flowers. Of course we were still friends. Friends forever.

Ethan and Carter Talk About Music:

Ethan: What's your favorite song?
Carter: Thunderstruck by AC/DC.
Ethan: What? Are you serious?
Carter: The guitar riffs, man. I'm going to play like that some day. (Carter stands, starts doing air guitar and humming.) You're surprised, aren't you? See, I can still surprise you.
Ethan: I thought you were going to say something by Adele. Could you change your answer? Because I bet Andy $5 you'd say Rolling in the Deep.
(Carter sits back down, purposely knocking against Ethan.)
Carter: Why would I pick a break up song as my favorite? I've got you. But I'll ask my mom for $5 to give Andy if you want.
(Ethan kisses him, delighted, and forgets about music except for the sound of Carter's hand slapping the back of the couch in his usual rhythm of three.)