Author Of The Month - Vanessa North - Week One

Welcome to our first week of celebrating the amazing

In today's post, we'll talk about Blueberry Boys and A Song For Sweater-Boy (from the How We Began anthology), plus a list of Vanessa's favorite things, and a chance to win one of her books! 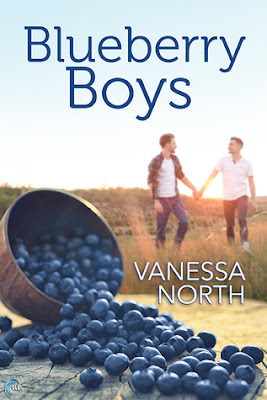 Connor Graham is a city boy—a celebrated fashion photographer in New York. When his uncle’s death drags him back to the family blueberry farm, all he wants to do is sell it as quickly as he can. Until he meets his uncle’s tenant farmer.

Jed Jones, shy and stammering, devout and dedicated, has always yearned for land of his own and a man to share it with. Kept in the closet by his church, family, and disastrous first love, he longs to be accepted for who he is. But now, with his farm and his future in Connor’s careless hands, he stands to lose even the little he has.

Neither man expects the connection between them. Jed sees Connor—appreciates his art and passion like no one else in this godforsaken town ever has. Connor hears Jed—looks past his stutter to listen to the man inside. The time they share is idyllic, but with the farm sale pending, even their sanctuary is a source of tension. As work, family, and their town’s old-fashioned attitudes pull them apart, they must find a way to reconcile commitments to their careers and to each other.

“May I take your portrait?”
Jed’s face shuttered. “W-what for?”
“Because the first hour after sunrise, the world turns gold and gorgeous. Any minute now, the light is going to catch every bush here on fire—it’s going to be amazing. You’re here, you’re part of it, and I’d like you to be in the photograph.”
“Out here with b-burning bushes?” Jed raised a soft brown eyebrow and smiled.
“Please?”
“I guess.” He shrugged, then took off his baseball cap again. His hair was flattened close to his head, but puffed out a little around his ears. Hat head. Not something Connor was used to seeing in the city among the darlings of the male model set. And yet Jed lifted his chin with a model’s instincts, and the line of his jaw, the jut of his cheekbones were thrown into prominence. Beautiful.
“Here.” Connor pointed to the end of a row of bushes. “Stand just to the right of this one.” He stepped back and waited for the light. Jed studied Connor for a long moment—bemused or annoyed, Connor couldn’t tell—then turned his face to the east and watched in silence.
Jed was painted in gold and rose as the sun crept above the horizon. All around him, the sunlight caught on dew, limning the branches and leaves and casting a halo around Jed’s hair. It was almost enough to make Connor believe in angels. But not quite.

The clicks of Connor’s shutter sounded rapid-fire, loud in the morning stillness. Sure, he’d come out here to take photos of the farm, but this, this was so much better. This was the kind of portrait that won awards—a modern farmer, his baseball cap under his arm as he greeted the dawn. It felt intimate, sacred even. Connor wasn’t a lifestyle photographer, nor a documentarian. A photograph like this, of a man in his element, seemed surreal to someone who plied his trade in the carefully crafted falsehoods of fashion photography.
Jed turned his face back to Connor, smiled, and said, soft as can be, “Ch-cheese.”
Connor snapped a last shot and then lowered the camera. “Thanks.”
Jed ducked his head and nodded.
“I’ll let you go back to work.” Connor gestured to the truck. “I’ll take a few more photos of the farm, if that’s okay.”
“It’s y-your farm.” Jed repeated with a shrug. “I just work it.”
Connor nodded, awkward in the face of Jed’s acceptance of his place here. A place Connor didn’t feel a claim to, and didn’t want to. “Okay, thanks.”
Placing his hat on his head, Jed tipped it gently in Connor’s direction and climbed back into his truck. Connor watched him drive away, ignoring the temptation to photograph the tracks he left in the mud like so much graffiti. Jed was here. He wasn’t what Connor had expected when Marty Sullivan told him there was a tenant living in the main house and working the land.

The farmers he’d known as a child had been men like his uncle—big, brawny, and well used to a day’s work. Jed Jones was built like he’d fall over in a strong wind, with a body more in common with the lithe young things Connor photographed than with the rednecks who’d had no patience for Bruce Graham’s chubby sissy-boy nephew.
“Ch-cheese.”

Second in today's line-up, A Song For Sweater-Boy (from How We Began): 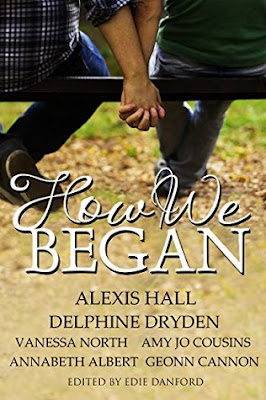 How does love begin?

A glance, a gesture, an unexpected offer of help from a stranger…or from a good friend. A smile across a counter at a coffee shop or video store. A secret revealed in a song from another place and time. Or in a love ballad crooned at a high school dance.

In this anthology of never-before-published sweet LGBTQ+ stories, six authors explore the beginnings of love between young and new adult couples. All proceeds will support The Trevor Project's work with crisis intervention and suicide prevention for LGBTQ+ youth.


He starts playing the song, the one he's been working on since that first day we went to prison knitting together, and he hums along. I start humming with him. The melody is pretty simple, so even though I don't have the greatest voice, I can manage. He grins over his guitar at me and says, "Keep going," then starts humming a harmony. My voice falters a little, but then I find the thread of the melody again. I keep going right through to the very last verse, when the final guitar chord dissipates into the quiet of my room.

"Wow." My heart flutters in my ribcage like an excited bird.

"Yeah." He nods. "I think we got it. Now I just need to come up with lyrics, and Helen will be able to play it at our next gig."

"Isn't it a little pop power ballad for Helen?"

His tongue catches between his teeth as he smiles. “Someone’s been studying.”

Face warming, I look down at my sock and shrug. “A little.”

“Pop power ballads make the world go round. Even for bands like Helen. Love songs are a dime a dozen, but everyone's got a favorite."

"Are you writing it for Abbie?"

He stops the idle strumming he'd been doing. "Um."

"I need to break up with her, but next week is homecoming, and then Halloween, which is like Christmas for her, and then her birthday is in November, and then it's Christmas, and how am I not the asshole in this situation? No matter when I do it, I'm either the dude who jilted her for homecoming, or the one who ruined her holidays or her birthday."

Is he asking me for relationship advice?

"I'm serious." He throws a pillow at me, and it bounces off my knees and flops to the bed between us.

"You're seriously asking a gay autistic for girlfriend advice? That’s two things I don’t do: girls and social."

He grabs the pillow back and presses it to his face, howling into it dramatically before pulling it away and saying, "Yes, Jamie. I would like your inexpert, overly blunt advice, because I'm a fucking idiot when it comes to girls, and an autistic guy with no interest in the fairer sex can probably do better."

"The fairer sex?" I can't help it, a giggle sneaks out. I cover my mouth, but it just makes me laugh harder. Pretty soon, he's laughing too, his whole body shaking. Every time our gazes connect, another wave hits us, until he's pleading, "Stop, please stop. I nee—heee!"

"No, I'm ready, I'm ready. Lay it down." He straightens his face, but laughter still dances in his eyes.

I lean toward him, and he leans in too. Our faces are so close they're almost touching, and it feels like there's an electric current sparking between us. I lick my lips and cup my hand to his ear, and he shivers—ticklish? Suddenly, it's not funny anymore, and all the laughter falls from my voice when I whisper, "Date boys."

When Sandra asked me to write a “favorites” post, the song from The Sound of Music immediately filled my head. Lucky for you all—because I really can’t sing—I didn’t try to record a cover of it subbing in all my favorite things. I tend to love things by mood, so my favorite movie or song might change from day to day, but some things are always constant.

Waking up five minutes before my alarm and knowing I don’t need to spring out of bed and start my day just yet.

Watching my sons cuddle with our geriatric mastiff.

The feeling of my husband’s beard against my skin when we kiss.

The smell of silk yarn.

Turning the pages of a favorite book.

Reading poetry out loud in French.

The first punch of wasabi from a plate of sushi.

The way my dog—even though he outweighs me by 50 lbs—tries to climb into my lap during a thunderstorm.

Reciting every line of the Princess Bride as I watch it with my kids.

The frenetic energy of a meal coming together just so in the kitchen.

The excitement of capturing a perfect moment with my camera.

Rubbing my scalp just after shaving my head.

The smell of the sidewalk after it rains.

A glass of champagne out of the good crystal on a book release day.


Just a few of my favorite things. What are some of yours?

(Tell us in the comments!)


Thanks for joining us today. Come back next week for more of Vanessa's books, five little-known things about her, and another chance to win!