Welcome to our Grand Finale celebrations for the amazingly talented

In our final post, we'll talk about An American Homo In Paris (for which Sandra provided the prompt), and The Lonely Drop, two stories Vanessa wrote for the M/M Romance group on Goodreads during their yearly DritC event. Both are free downloads.

We're also conducting our Q&A with Vanessa today, and all the way at the bottom is one more chance to win one of her books.


First up, An American Homo In Paris 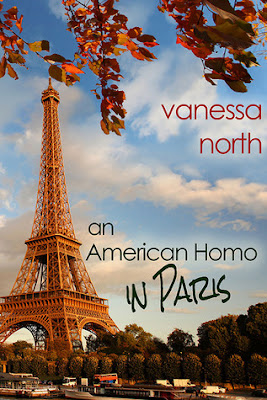 I came to Paris 9 months ago, with my now ex-boyfriend. City of Love, my ass. Now I’m sitting here in this café near the Eiffel Tower, sipping the cheapest coffee they had on the menu, heartbroken and unsure of my next steps.

Without a place to live, no job, not much money left in the bank, and speaking only a little French, I guess it’s time to put my tail between my legs and head back home to Bumfuck, Idaho.

The Eiffel Tower looms in the background as two men kiss in the foreground of the black and white image.


Benji found himself watching Ziri’s lips move as he talked, and the way his honey-brown eyes seemed to light up when they discovered something they had in common. Every inch of Benji’s skin seemed to tingle and ache, and he couldn’t stop thinking about the fact that his pants had been warm from Ziri’s skin. Ziri’s muscular thighs had stretched the denim. Ziri’s cock had pressed against this zipper. Who knew letting someone wear your pants could feel like having them under your skin?

For the first time in eight years, Benji was presented with the dilemma of wanting to take a man home, and not having the first clue how. Close to midnight, Ziri pulled out his phone and winced. “I have to catch the RER back to Saint Denis. We don’t have time to get your backpack, but Hélène opens her café at seven o’clock.”

The sour taste of disappointment and missed opportunity flooded Benji’s mouth. “I’ll get it from her in the morning. Come on, I’ll walk you to the train.”

They walked in silence, suddenly shy after their day together.

“Well, I guess this is it. I would say au revoir, but… I think tonight is more of an adieu, n’est-ce pas?” Ziri’s eyes crinkled up in a smile as he held out his hand for a shake, and Benji’s heart lurched.

Ziri flinched, his brows drawing together in hurt.

Give me something humiliating, or impossible—just give me a dare.”

“The game is over, Benji. Time for you to go home and pack so you can go back to the States tomorrow.”

Ziri’s nostrils flared—Benji was pissing him off. Good. He was pissing Benji off, sticking his hand out for a handshake as if this day hadn’t meant anything.

“I dare you to go home and pack.” Ziri turned on his heel and started toward the turnstile.

“I forfeit,” Benji called after him. “I forfeit. I won’t accept that dare.”

Ziri spun around and was back in front of Benji in two long steps.

Benji’s back hit the wall, but his head was cradled in Ziri’s hand. Their foreheads pressed together, and Ziri’s other fist clenched his shirt. Warm, brown eyes searched Benji’s face for a long moment while both of their chests heaved. Then Ziri’s lips closed over Benji’s and everything else dropped away.

It was the dare and the forfeit, the fantasy and the possibility. 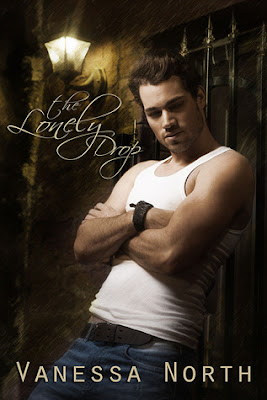 Ten years ago, I turned him down.

One night stands were his norm, and not because he couldn’t have had a relationship if he’d wanted one. He could pretty much have any man he wanted. I walked away because I deserved better.

Now our paths have crossed again. He has the world at his feet. It’s a tempting thought to throw away my lifetime of ideals for a single night with him.

Do I still have the strength to walk away?

Do I even want to?

Two men lie naked in bed. One is on his stomach, with his head out of the frame, the other strokes a hesitant hand down his lover’s back.


I let the beat wash over me as I press in closer, rocking my dick into his in a way I’m only bold enough to do because we’re on the dance floor. He slides his hands down my sides, holding me in place.
“…so fucking sexy when you dance, you know that?” He has to practically shout it to be heard over the music. I don’t say anything; I close my eyes and dance.
His body is hard and hot and he moves with perfect rhythm against me, hips shifting in a sexy roll. When he spins me around and starts to rub against my ass, I moan, throwing one arm over his shoulder and cupping the back of his head. His hair is soft as silk, a little damp. I gather some of it in my fist and I tug.
He smoothes a hand down my chest and his lips find the side of my neck just as his fingers pinch over my nipple.
Oh fuck. It feels good, really fucking good, tense and sharp at once. I trust him not to go too far in public, so I nuzzle my forehead against the side of his face and let him manhandle me.
Another tug at my nipple sends my brain reeling.
“Oh, God,” I whimper, biting my lower lip.
“You should see the look on your face right now,” Kevin says. “You look completely lost and found. You look like a man should look on the verge of an orgasm. You look fierce and fine and so damned hot. All the guys in this room wish they were dancing with you, and they’re jealous because I’m the one holding you. They think I’m going to be fucking you later, and they get hard just thinking about it. About that face you’re making, and me causing it. How does that make you feel?”
“Turned on,” I admit, though it’s really his dirty talk, and not the idea of the others watching us that turns me on.
“Yeah?” His hand slides down from my nipple to brush softly over the front of my jeans, barely a touch, but enough to make me jerk a little in his arms. “Oh, definitely yeah.” He presses against my erection and rocks his own into my ass. Then, he spins me around again and pulls my arms back around his neck. “This, Nicholas, is called fun.” He says it close to my ear, then kisses the side of my face. “Now, let’s go get another shot.”


The characters, usually. At the beginning of the story, they’re like a puzzle I put together, and by the end of the story, I have the whole picture. I’ve always loved puzzles, and putting together the pieces of a story satisfies that same impulse in me.

I make a loose outline, start from the scene that feels most urgent to me (not always the first scene in the book), and then start building around that one scene at a time, re-outlining as necessary until I have a complete book.

Oof. That’s a hard one. Probably Eddie from Lake Lovelace, because writing him was a totally id-driven process. With Eddie, it was constantly a matter of thinking of the most outrageous thing he could say or do, and then going two or three steps further. He was very liberating.

Scott from Blueberry Boys, but probably not for the reasons you think. Yes, he was a homophobic asshole, and we all love to hate guys like Scott, but to me, he was so much more than that. He was a symbol of the stagnation of small-thinking. He had given up on his life being what he wanted it to be, so he lashed out at those who were strong enough to seek their own joy. Really, Blueberry Boys is a story about four men—Jed and Connor, of course, but also Kyle and Scott, two other “boys” who grew up shaped by the same experiences and whose lives took different turns. Scott was the literary personification of lost potential.

Ha. Okay, so there’s a scene in The Lonely Drop in which I dropped out of present tense. I didn’t catch it; my editor didn’t catch it. A reader caught it, and I was totally embarrassed. Yes, it’s a free story, and yes, it was written under very tight time constraints, but I wish I could go back and fix it because it’s wrong, dammit!

Summer Stock is next—it’s a large-cast small town contemporary male/male romantic dramedy (this is totally a thing) about a young actor who has had some Hollywood success but has had more notoriety in the tabloids going home to North Carolina to hide out until the latest round of scandals dies down. On his first weekend back in North Carolina, he hooks up with a townie, gets photographed without his pants, and makes the un-keepable vow to keep his pants on for the rest of the summer.

After Summer Stock, I’m working on a top secret project that will hopefully be announced around Christmas time. In 2018, I’ll be releasing Off Limits, the first book in a new multi-author F/F series from Riptide Publishing, and a male/male new adult retelling of Jane Austen’s Emma.


Woot, sounds we have some awesome books to look forward to. Thank you for indulging us. :)

Thanks for celebrating this fabulous author with us. We hope you enjoyed the posts, learned a bit about the author, and found a few new books to add to the never-ending TBR.