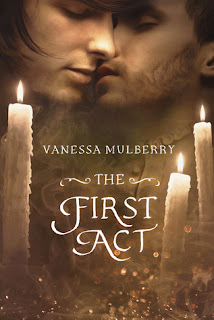 
April 1594. William Moodie thinks he’s in love with celebrated actor, Richard Brasyer. When Brasyer’s playing company, Goldfox’s Men, comes to town, William is only too willing to leave his country life for the opportunities of the theater and a life in London. Determined to become Richard’s apprentice, William seeks to impress his mentor with his acting—and please him in bed.

Meanwhile, Richard struggles to escape his past as a spy and disentangle himself from the manipulations of his former master and ex-lover, Bennett Goldfox. Swearing off a relationship with his new apprentice proves difficult for Richard, as William uses all his youthful charms to seduce him. When Bennett’s life is threatened, Richard is lured back into the game for one final mission, and he and William travel to Cambridge to hunt down a list of traitors to the Crown.

In the midst of danger and deception, Richard and William come to truly see each other, faults and all, and realize their feelings run deeper than either expected.

I wanted to love this book. After all, it's a historical set in Shakespeare's time about an experienced "player" and his new apprentice, a farm boy who fancies himself in love with the acclaimed actor.

This is a new author, and I can only praise the quality of the writing. The prose felt authentic, and the setting (the taverns, manners, and political intrigue of Elizabethan England) came alive. I can't fault the author's research or skill.

Richard tries to resist William's advances. William is only 20, and his cousin is Richard's dear friend and partner in the acting company the men carry. But William is struck with lust and wants to prove himself to Richard in any way he can.

Had the plot focused on Richard and William's budding relationship, I would have been a satisfied reader. But I felt like the relationship simmered on the back burner, with the spotlight going to Richard's love/hate relationship with his old master and former lover, Bennett.

Bennett is a fascinating character, finely sketched and nuanced. I loathed him as much as I adored him, and I could understand the hold he had on Richard. Nearly halfway through the story, Richard returns to Bennett and finds pleasure in his body, even as he pushes William away. Richard doesn't trust Bennett, but he becomes embroiled in Bennett's games and manipulations.

Nothing between the MCs feels settled until the last chapter, and even then the HEA is new and fragile. I expected more romance, more steam, more passion, and I didn't find it here.