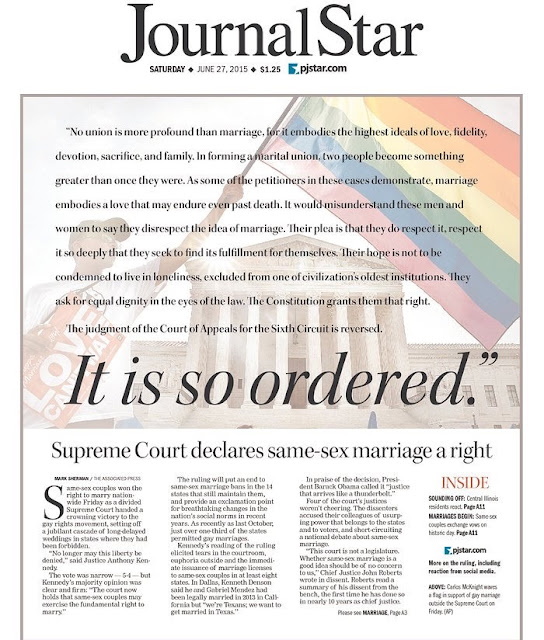 June 26, 2015 was the second to last day the Supreme Court would be in session before the summer recess, and my wife, Kate, and I had spent days on pins and needles waiting to see if SCOTUS would render an opinion on the Obergefell vs Hodges case. That was the case to decide if marriage equality would become law in all 50 of the United States. We’d been waiting as patiently as we could (refresh, refresh, refreshing the SCOTUSblog where the opinions were updated by the SCOTUS staff for the cases heard), but that day, a Friday, was our biggest hope.

It was a momentous occasion for acceptance nationwide. It was a validation people like my wife and I weren’t to be turned away from getting a marriage license regardless of the state in which they lived (though it was already legal in our state). It was the highest court in the land saying, “Yes, you are full-fledged citizens of this country, and deserve to have your relationships recognized.” It mattered in principle to us, if not in detail. So many had fought for recognition, for a shred of dignity when for so long, we’ve been called all manner of names and have been told our love lives don’t matter, that our love is only valid if it follows certain parameters.

Who are we hurting, we’d ask. Does my relationship prevent anyone from having their own? Does it oppress those whose relationships are the status quo and no one bats an eye at a man and woman together?

We just want to love. To be free to love. Is that so much to ask?

I can remember going to an appointment at 8:30 a.m. and thinking I should postpone it, wanting to stay in front of my computer so I could see the moment it happened, but whether or not SCOTUS would announce a decision at all that day wasn’t entirely certain. I had my phone on me, and a strong signal. Refresh, refresh, refresh.

I almost cried in public when Kate’s message pinged through: WE WON!

I did cry in public when someone I follow tweeted he could now get married.

From the majority SCOTUS opinion:

No union is more profound than marriage, for it embodies the highest ideals of love, fidelity, devotion, sacrifice, and family. In forming a marital union, two people become something greater than once they were. … [The petitioners’] plea is that they do respect [marriage], respect it so deeply that they seek to find its fulfillment for themselves. Their hope is not to be condemned to live in loneliness, excluded from one of civilization’s oldest institutions. They ask for equal dignity in the eyes of the law. The Constitution grants them that right.
The judgment of the Court of Appeals for the Sixth Circuit is reversed.
It is so ordered. 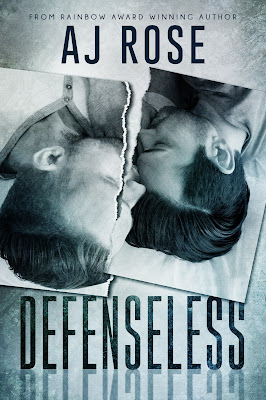 Kyle Decker knew dating Jesse McGovern would change his life. Young and in love, and with the Supreme Court ruling in favor of marriage equality, the world is theirs to conquer.

But their victorious Pride celebration ends in a savage attack, brutally demonstrating they’re far from equal. Instead of wedding planning, Jesse and Kyle face an arduous recovery and a shattered sense of their place in the world, their once-promising future suddenly something to survive.

While Jesse struggles with a permanent injury and its emotional aftermath, Kyle’s single-minded focus on Jesse’s recovery is the only thing keeping his demons at bay…for now. What was a once-in-a-lifetime kind of love is now full of lies and resentment.

With their dreams tattered and forever changed, trusting anyone—even each other—is daunting. So how can they have faith in twelve strangers on a jury? They’ve already learned the hard way it only takes a moment to become truly defenseless.


June 26, 2015
Four boxes. Crossing everything.
Jesse frowned at the text message from Kyle, then tapped out a reply after making sure his boss wasn’t around to see him on his phone, though if she’d asked him, he’d have explained today was the day the Supreme Court was expected to hand down their opinion on the same-sex marriage case, Obergefell vs Hodges. Emily wasn’t the worst boss when it came to stuff like this, but he didn’t want to irritate her. Every day that week, he’d been hopeful for the ruling to be announced, and every day, it hadn’t come. It meant a lot of surreptitious checking of his phone, and he didn’t want to push it.
What does that mean?
Kyle replied immediately. Actual boxes holding the opinions. That’s a lot of boxes compared to normal.
Think one is the marriage case? he sent back, his heartbeat picking up.
God, I hope so.
Jesse eyed the clock. Just shy of nine a.m. was earlier than his usual morning break time, but it wasn’t every day nationwide marriage equality could happen either.
“Emily, is it okay if I take my break early?” he asked as she returned to her desk with a fresh mug of coffee.
“Is the ruling today?” she asked, eyes alight with interest.
He couldn’t keep the surprise from his face, though he didn’t know why she wouldn’t be aware of something this well publicized. “Yeah. They’re announcing the decisions soon. This may be one of them.” His phone buzzed with another text from Kyle.
This is it! 3 of the 4 boxes are Obergefell.
“Go.” Emily shooed him, and he didn’t need to be told twice.
Courtyard, he told Kyle. If you can.
He made a beeline for the small, outdoor sitting area that used to be where the smokers went before the hospital made the campus smoke-free. Just as he spied Kyle, another text came through.
Already here.
“Anything yet?” he demanded, hurrying to Kyle’s side. They were alone and took one of the benches, both glued to their phone screens.
“No. Did you get the SCOTUSblog link I sent?”
Jesse had already clicked the link and was waiting for it to load. “It’s slow.” Either the hospital’s usually spotty Wi-Fi was to blame or everyone under the sun was on the same website.
“Mine’s refreshing,” Kyle said.
“How long does it take for them to update once it’s decided?”
“They’re pretty quick.”
Jesse’s screen loaded, and he scanned the questions being answered on the blog by the team for the Supreme Court. A new update posted.
“They’re laying low while they wait.” His phone showed nine a.m. on the nose.
Kyle released a huge breath and grabbed Jesse’s hand. “This is it.”
“Fingers crossed.” Jesse leaned over and planted a kiss on Kyle’s cheek.
A text message from Lance flashed at the top of Jesse’s phone, which he didn’t reply to, not wanting to miss the update. You watching this?
“Load, dammit.” Kyle glowered at his screen.
Jesse refreshed the link. Kyle’s loaded first.
He sucked in a breath, his grip on Jesse’s hand becoming painful. “First opinion is marriage.”
Jesse’s updated with a new entry. “‘Fourteenth Amendment requires a state to license a marriage between two people of the same sex,’” he read, beginning to tremble. “What does that mean?”
Kyle’s eyes grew wide as another update posted, his voice full of wonder. His hands dropped to his lap, fingers vice-like around his phone. “We won. Five to four.” When he looked up, his eyes were watery.
“We won?” Jesse needed confirmation. It was too good to be true.
Kyle laughed, almost manic as he grabbed Jesse in a fierce hug. He shook, and to Jesse’s astonishment, a sob escaped, muffled by his shoulder.
“We won,” Jesse whispered, squeezing his eyes shut. Kyle’s sobs shook them both and Jesse’s throat closed, trapping his emotions in his chest. With no outlet, his lungs swelled, balloons inflating in his ribcage, pressing on his organs. They burned with held breath. If he didn’t let it out, he would burst, but letting it out wasn’t possible.
He swallowed, trying to ease the pressure, and then it came, flying on the wings of a near-hysterical laugh. The urge to shout was nearly overwhelming, work be damned.
Kyle chose that moment to kiss him, and Jesse’s rebel yell was muffled in his boyfriend’s mouth. Kyle’s cheeks were wet, and he broke the kiss to breathe.
“My nose is clogged,” he said gleefully.
Jesse laughed. “Oh my god!” was all he could manage. His phone, forgotten on the bench, buzzed insistently, but he couldn’t bring himself to look. It was too much. This moment, one he’d fought for in his own state, one he’d hoped for, for those like him in other states, was sacred. Sharing it with Kyle made it that much better.
Without thinking, he opened his mouth, as shocked by the words that came out as Kyle appeared to be. “Marry me.”

Kyle stared, mouth agape. As the moment stretched, Jesse began to squirm, realizing however impulsive the question was, he meant it with every fiber of his being.
“You’re serious,” Kyle said, awed.
“As a heart attack,” Jesse answered fervently, searching Kyle’s features for a hint of his thoughts. “Marry me,” he repeated.
A tear slipped down Kyle’s cheek, and Jesse wiped it away with his thumb.
“What will our parents say?”
“Hopefully congratulations,” Jesse said. “I’m more concerned what you’re going to say.”
“Yes!” Kyle threw himself at him and squeezed so hard, Jesse couldn’t breathe.
He didn’t care, returning the embrace just as fiercely. If he suffocated then and there, at least he’d die happy in the arms of the man he loved.

The book will be available from Amazon, Barnes & Noble, All Romance eBooks, iTunes, and Page Foundry for $5.99 on September 13th.

Thanks to Sandra and My Fiction Nook for hosting me today!

Find out more about AJ Rose on her website.