Book Review: The Weight of It All by N.R. Walker 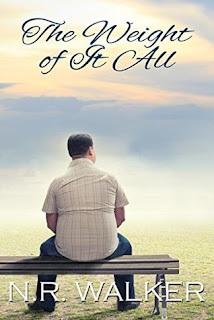 
After being dumped by his long-term boyfriend for being overweight, Henry Beckett decides to make some drastic changes. In a vain attempt at getting his boyfriend back, Henry does the most absurdly frightening thing he can think of.

He joins a gym.

Reed Henske is a personal trainer who isn’t sure he’ll ever be ready to date again. He’s sick of guys who are only interested in the perfect body image, never seeing him for who he really is. As Reed tortures Henry with things like diet and exercise, Henry enamours Reed with recipes and laughter. As the friendship lines start to blur, Henry is convinced there’s no way Thor-like Reed could ever be interested in a guy like him.

Reed just has to convince Henry that life isn’t about reaching your ideal bodyweight. It’s about finding your perfect counterweight.

I am a fan of stories about imperfect MCs, and my heart went out to Henry, whose boyfriend of eight years left him, claiming Henry was old (at heart) and fat (250 pounds at 5’10”, which qualifies as obese).

Henry decides to lose weight to get his boyfriend (the One Who Shall Not Be Named) back. He is really whiny and negative when he first begins his workout regime. He complains about EVERYTHING and constantly makes self-deprecating jokes. He puts himself down before others can.

Honestly, bitching & moaning annoys me in real life, and it annoyed me here. I am very much a suck-it-up-and-shut-up kind of person. I have always been a fitness fanatic, so it was hard for me to relate to Henry. But I was proud of him for not giving up, and he grew on me as the story progressed.

Thank goodness for Reed, Henry’s personal trainer, who takes a very, well, personal interest in Henry. Reed is gentle, encouraging, and looks like Thor. But Henry isn’t ready to date, nope, not at all. He barely pays attention to any of Reed’s *ahem* many assets.

I thought Reed was almost too good to be true, but I can’t fault Henry for falling and falling hard. Henry and Reed actually have a lot in common. They both like cooking (Henry finds a passion for creating healthier but delicious recipes) and quiet nights at home. They talk about anything and everything. They just fit.

I enjoyed the secondary characters, especially Henry’s BFF Anika and her boyfriend Sean. I found myself cracking up at Henry and Anika’s crazy conversations.

This slow-burn, low-angst story is as much about Henry getting healthy, rediscovering friendships, and gaining new self-confidence as it is about Henry and Reed’s budding relationship.

There was not a lot of steam here, but the HEA was just about the BEST EVER. That epilogue had me cheering.

I cannot remember the books I've read any more than the meals I have eaten; even so, they have made me.