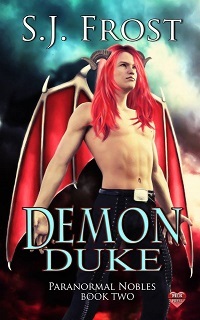 A month ago, Calvin Blackwood found himself in the company of vampires, having been hired to use his talent as a witch to summon a demon. That demon ended up saving his life. In the time since, he hasn’t been able to forget about Sal. He knows entering a deal with a demon is dangerous, but to save his brother, binding himself to the beautiful demon might be worth the risk.

Sal is a duke among demons. An immortal being, more powerful than a vampire, but who has one admitted weakness, a fondness for humans. When Calvin offers to make a deal, he’s hesitant, but can’t deny his need to be closer to him. He also knows if he doesn’t help him, Calvin will summon another demon, and he knows all too well the treachery of his own kind.

Desire and trust builds between Calvin and Sal. Their relationship grows, but so does a hidden threat, and it might take power greater than a demon duke to save them. It might take that of a witch.

Cardinal rule when reading this series: You cannot take it seriously.

This book is fun and sexy and just plain silly. If you want scary vampires and hellish demons, look elsewhere.

Sal is a demon with a sassy attitude who prefers to spend time in the human realm. If you read book 1 (which you really should before reading this one), you have already met Sal and his sidekick, a crocodile named Beezle. Sal's best friends are two vampire cousins, Basil and Valentin, and Valentin's partner Sebastian.

Calvin is the witch who summoned Sal in the last book, and then saved him by breaking the circle of salt. Calvin and Sal can't stop thinking about each other and quickly fall into lust upon meeting again. Mind you, it's just LUST. Sal, as he tells himself and others repeatedly, doesn't do pesky emotions or any of that mushy crap.


Calvin asks Sal to heal his brother Nathan, who is on dialysis, but Nathan is a priest (though not an ordained one) and doesn't trust demons. He waves around holy water and stuff, which isn't very welcoming.

Calvin loves Sal's demon form, so some of the sex scenes are human/demon, horns and all. If that doesn't float your boat, stay away. I thought it was awesome.

Honestly, the plot was a bit of a hot mess, what with a power-hungry, evil demon, Sal's ex-demon-boyfriend smirking all over the place, and Sal pushing Calvin away. The banter during the action scene at the end was too much. Call me crazy, but I'm not really into joking when someone is dying. Nathan was also forgiven too easily for trying to kill Sal. That's just not nice.

The ending is a forever kind of HEA, and there are two potential couples on the ready if the author continues this series (and I hope she does). I'm going with 3.5 stars because there were quite a few editing issues, which is a real shame considering this isn't even a self-published book.

A good book has no ending.

An free copy of this book was provided by the publisher in exchange for an honest review.