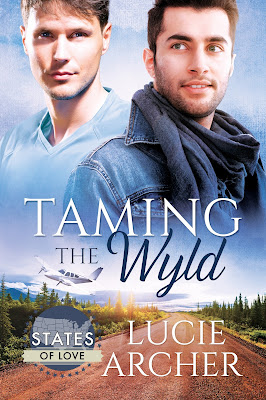 The Witness Protection Program dumps JD Smith practically at the ends of the earth—in Two Pines, Alaska—to protect him until he can testify against a dangerous gang. He tries to stick to his story and keep his head down, but it’s impossible to ignore bush pilot Jake Wylder, a sexy loner with quite a reputation around the small town.

Flying medical supplies around Alaska suits Jake’s wild streak and love of freedom. He’s perfectly content to keep his romantic encounters casual—at least until he meets JD. Something about the nurse makes Jake think settling down might not be such a hardship. Now he just needs to convince JD he’s serious—which won’t be easy, given his past.

For a relationship to stand a chance, JD must testify so he can return to Two Pines as the man he really is—and Jake must grow into the man JD needs him to be.

If you’re looking for a quiet little town as fridge as a witch’s teat, than Two Pines might be for you. It’s May and it f---ing snowed today! The only time I’ve seen snow is on top of a mountain, but apparently this is normal around here. Yeah, I know it’s Alaska, but still!


While almost not big enough to be called a town with 630 residents, the people are the only redeeming factor. The old man who owns the gas station was kind enough to special order me a case of Cherry Cokes, which practically cost me my first born, but I thought it was nice of him. Mal, the guy who owns the local diner, and only edible eatery within 200 miles, gave me the House Special for free the first time I ate there, but I have a strange suspicion his “burgers” don’t come from cows.

Unfortunately, everyone and their dog is a gossip, but I guess that’s understandable since there is nothing else to do here. The whole town knew everything about me by the end of my first day and not once did anyone ask me what my name was. They all just knew. They also have no qualms about asking me personal questions about why a city guy like me would want to up and move to Two Pines, Alaska. I didn’t, but that’s beside the point.

My cat is not pleased with the transition either. I can’t let her go outside because I think someone mentioned a bear roaming around by my house. And she’s not impressed with all the daylight. Today the sun rose at 5am and it won’t go down until 10:30 tonight! THIS IS NOT NORMAL!!

On the upside, I’m only trapped here until… well, until some personal matters are attended to.

TL;DR Ok if you like extremes, friendly people, and not dying.

Lucie Archer is a student of the universe who is obsessed with the stars, in love with beaches, and crazy about dudes falling in love. She tells stories of romance, love, and life, with a little bit of passion thrown in for good measure. Because what’s life without a little pop and sizzle?

When she’s not writing, she can be found tending to her garden, playing with her four-legged children, or procrastinating. Although, she spends a lot of time fending off random plot bunnies that threaten to derail her WIP’s.