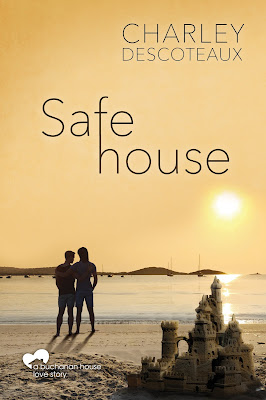 It’s never too late for a new beginning…

Kyle Shimoda is an asshole magnet, has been for as long as he can remember. At forty-seven, he doesn’t see much chance for improving his luck in love. His friends who run Buchanan House, a gay retreat on the central Oregon coast, know he wants to find “someone nice” to settle down with, and they set him up with Officer Brandon Smith. Kyle has a turbulent history with law enforcement, but he can’t deny his attraction to the buff cop.

Brandon has been a police officer in Lincoln City almost since the day he graduated from high school over thirty years ago. He’s cultivated the facade of a serious, disciplined law enforcement officer, but beneath his overdeveloped chest beats the soft heart of a drama queen. A cancer scare shifts Bran’s focus from finding a serious relationship to having as much sex as he can—putting his goals squarely at odds with Kyle’s. If he can’t find the courage to be honest about his feelings for Kyle, the happiness they’ve both been searching for could slip through their fingers.


Chapter Two
Brandon barely paid attention as he drove between the cemetery and the apartment he shared with two roommates. He’d hoped to find a voice mail from the doctor after the funeral, but no such luck. He did find one saying the new guy, Dylan, had called in sick, and Brandon was expected at work within the hour. He would have been happier to stay at the cemetery and talk with Paulie a little longer. And Kyle. Bran had met Kyle before, but they hadn’t spoken. He had noticed then how handsome Kyle was, and he was even more striking with his hair longer, framing his high cheekbones and full, sensuous mouth. His silky black hair looked so touchable.
This isn’t getting me to work any faster.
At least work will be a distraction.
He hurried home and changed into his uniform. His quick spot check in the bathroom mirror turned into a lingering appraisal. Brandon ran an open hand over his chest, not to smooth the impeccable fabric of his uniform shirt, but to reassure himself that nothing had changed. He grimaced at his reflection, thinking a little less gray and a little more brown in his hair might be a nice change.
Brandon shivered as he recalled the MRI he’d endured three days prior, which had revealed a suspicious lump in his chest. Forty-seven minutes in a tiny tube while the machine hummed and took pictures of his breast and lymph tissue. Just thinking about the way it had felt to lie there made him shiver—it was worse than the needle biopsy he’d had the following day. With every inhale his shoulders had brushed the walls of the tube on both sides, and less than halfway through he’d had to talk himself out of fleeing. He wasn’t a tall man—something that had bothered him throughout his life—but until that day he had taken pride in his body, in the bulk he’d cultivated without sacrificing speed or agility.
During that forty-seven minutes, he would have been happy to trade his broad shoulders for a smaller frame.
Since I’m making empty wishes, I might as well make one for a better-looking face. A face that could attract a handsome young guy like Kyle instead of scaring him half to death.
Bran’s stomach roiled at his own thoughts, and he resolved to not even think the word death again until—unless—he had to. He was tempted to forgo shaving the sandy brown stubble from his face but fell back on the habit, hoping for the comfort a routine could provide, and reached for his electric razor.


Everything seemed to be happening so fast. Less than a week ago he’d gone in for his yearly physical, and now he was waiting for the call that would tell him whether he needed to make another appointment for that week or next year. In the interim he’d been squeezed into a tube and had a biopsy. And relived the worst time in his life over and over, the time when he’d learned about his father’s diagnosis.

Hello everyone! First I’d like to thank everyone at My Fiction Nook for their hospitality. It’s great to be here, sharing an exclusive excerpt from my new Dreamspinner release Safe House!
Safe House is Book Four in my Buchanan House series and I’m thrilled to share this story of two older men finding love. I enjoy writing about mature heroes—their lives are more complex than a lot of the younger guys I’ve met (and written) in stories. Brandon Smith is a good example of a complicated man, he has a demanding job, volunteers in more than one capacity in his community, and cares for his aging mother—and those are only the things I can tell without being spoilery.
This is a true series, meaning the books are best read in order, but I think this excerpt is easy to follow even if you haven’t already met the main players. Brandon is going to Buchanan House for Guest Chef Night, a recurring event at the camp, and also to be set up with Kyle.

Brandon had thought spending the afternoon with his mother might take the edge off his need, make his thoughts of Kyle and his smooth tan skin and silky hair go away, or at least tone them down, but no. As soon as Bran left his mother’s house, all he could think about was Kyle. Of sitting with him at dinner, maybe going for a drink afterward under the pretense of sand-castle building tips—
No. Hooking up. That’s all I want to do with him. Hook up. That’s it.
A lack of desire for a committed relationship didn’t excuse him from looking his best, though. Bran spent a little extra time to be sure he’d be as appealing as possible—as appealing as he ever could be with his bulldog’s face and stubby limbs. Nothing to be done about the gray in his hair—not within the next few minutes, anyway—but a clean and pressed shirt and khakis would be… passable. Bran watched in the bathroom mirror as he unbuttoned two and then three buttons of his deep green shirt. The moment his chest hair came into view, his gray chest hair, he hurriedly refastened the last one. He spent a short moment wondering whether waxing his chest would be worth the pain or if it would just make him look old and pathetic before turning off the light. Perilously close to chickening out, Brandon strode out of his apartment and down to his car.
He arrived at Buchanan House to find a full parking lot and an almost full dining room. At least it sounded full from the lobby, and all the chairs visible from there were full.
Nathan glided into the lobby before Bran could get himself past the dining-room door. “Darling, you made it!” Bran’s face heated when Nathan kissed his cheek. “We were starting to get worried about you. Kyle said you were called away earlier. Nothing serious, I hope?”
Bran let himself be swept away by Nathan’s chatter and the hand on his elbow leading him into the dining room, where the scent of Southwestern spices filled the warm air. It was like walking into a hug, if the hug was from someone who really turned him on.
Not surprisingly, Nathan led him to an empty chair beside Kyle. Brandon was surprised, though, to find he’d been seated at Kyle’s right. Maybe he’s a lefty too?

Nathan introduced Bran to two men he didn’t know—Chase and Garrett, also apparently from their Portland family—and then left to see to a table full of guests. Brandon said his hellos, and as soon as he was seated, both Kyle and Paulie started talking to him at once, from either side.
Paulie laughed. He always seemed larger-than-life to Bran, happier than almost anyone Bran had ever known and not shy about spreading it around. “Sorry. You two go ahead and chat. I need to get all the latest gossip from the city dwellers.” He abruptly turned to Chase and Garrett and asked about someone Bran didn’t know.
Bran was happy enough to turn to Kyle and take the chance to fully appreciate how nicely he cleaned up. Kyle was wearing a silvery-gray button-down shirt, open at his throat, with the cuffs rolled halfway up his forearms. The sheen of his long black hair made the iridescent shirt look almost plain, and his sultry dark eyes captured Bran’s with an intensity he hadn’t been prepared for. Kyle smelled vaguely citrusy, and Bran wanted to lean closer and take a long, deep breath to appreciate it. Instead he nodded and asked how Kyle was doing, relieved his voice wasn’t shaking. His hands were. He clasped them in his lap and tried to focus his attention on something banal, something completely not sexy.
Kyle’s concerned frown didn’t help. It made him even more alluring. “Everything go okay this afternoon?”
“Um, pardon?”
“You were called away. I hope it wasn’t anything serious.” Kyle reached out and pulled a basket with tortilla chips toward himself. He shook a few onto his plate and pushed the basket back into the center of the table. The way his hands moved, graceful and sure, mesmerized Bran, and they looked so soft….
***

To find out what happens next, check out my tour stop tomorrow at Alpha Book Reviews!


Before you go, though, leave a comment about a sand sculpture you’ve built (or that you’d like to build) and enter the Rafflecopter giveaway!