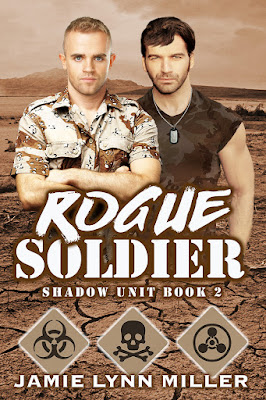 Shadow Unit may have overturned the illegal arms cartel in Kuala Lumpur, but the harrowing undercover op left emotional scars on Sergeants Shawn Weller and Connor Finley. Slowly, patiently, they piece their partnership back together, closer now than ever before.

But the arrival of Julian Montgomery, Shawn’s former CIA handler and lover, threatens to tear them apart. Julian knows all of Shawn's secrets as well as the past Shawn has kept hidden from Connor. Now the self-serving Julian wants Shawn back—with the CIA and with him. No one will get in his way. Including Connor.

When the joint Shadow Unit/CIA mission to stop the supplier of a deadly biological weapon goes sideways, Connor is captured, tortured, and used as a human test subject. It’s a race against time to save his life. But who can Shawn trust? And who has gone rogue?

Thirty minutes later Shawn walked down the hallway in the hotel to his room, having aimlessly wandered the streets of Srinagar on his way back, trying to organize the jumbled thoughts in his head, to figure out a way to start this conversation with Connor.
Closing the hotel room door behind him, Shawn tossed the keycard down onto the bedside table. He sighed deeply and sat down on the bed, rubbing his hands over his face.
"About time you got back."
Shawn's hands fell away from his face and he shot to his feet at the sound of the voice, heart pounding, fists clenched, every muscle tense and ready for a fight against the intruder. His eyes widened when he saw who stood before him, completely naked, and burning anger raced through him.
"Aren’t you a sight for sore eyes," Julian smirked, walking toward Shawn.
"What the fuck are you doing in here?" Shawn spat. "Get the fuck out! Now!"
Julian laughed. "Is that any way to treat an old friend?"
"You were never my friend."
Julian stepped up close, his green eyes darkening, voice low. He hooked a hand loosely around the back of Shawn’s neck. "No. We were a lot more than that…"
Then Julian’s mouth was on Shawn’s, kissing him hard, his other arm coming around Shawn’s waist to pull him flush against his naked body.
Furious, Shawn’s hands came up and gripped both of Julian’s biceps, intending to push him away when the door suddenly opened.
"Hey, it’s me…"
At the sound of Connor’s voice, Shawn pulled his head back almost violently, breaking the unwanted kiss. He watched as Connor took two steps into the room, saw the scene before him and came to an abrupt stop. Shawn saw the flurry of emotions cross his partner’s face – confusion, hurt, anger…and betrayal.
Shawn reached out to him. "Finn, wait…"


But Connor turned on his heel, the sound of the door slamming behind him gunshot loud.
Shawn shoved Julian away from him. "Get the fuck off me!"
Julian took two stutter steps back, his eyes hardening as Shawn saw realization cross his face.
"Fucking another partner, I see. Though I shouldn’t be surprised. That is your M.O., after all. But him?" Julian sneered. "You with the uptight, straight-as-an-arrow, company-man Brit?" He moved back toward Shawn, voice low. "You like it darker than that. I should know."
Shawn’s throat went dry as memories cascaded through his mind. "That’s not who I am anymore."
Julian barked out a harsh laugh. "You think you can run off and play patriotic soldier boy again to redeem yourself? Get yourself a wholesome boyfriend? Stand out in the light instead of the dark?" He pushed a finger into Shawn’s chest. "You’re a killer, Shawn. And a damn good one. Accept it." Julian paused, flattened his hand against Shawn’s chest. "Come back to the Agency. We were good together. We can be again."
Shawn knocked his hand away. "There was nothing good about us. Ever." He swallowed hard. "I’ll never work for the CIA again. Now get the fuck out of here."
Julian’s eyes narrowed. "You know I always get what I want, Shawn. Nothing," He glanced toward the closed door. "Or no one, will stand in my way."
Shawn felt his blood run cold at the veiled threat directed at Connor, followed by anger so fierce it nearly took his breath away. He got up in Julian’s face, his voice channeling that anger. "You do anything to him and I’ll remind you just how good of a killer I am."


Tell us about your new release, Rogue Soldier (Shadow Unit Book 2). What was your inspiration behind it?


With Rogue Soldier I wanted to turn the tables and put Connor through the wringer, both emotionally and physically. Broken Soldier was very much Shawn's book, so I wanted to give the spotlight to Connor this time. And after seeing a documentary on terrorism and biological weapons, I suddenly had the entire plot after also adding in an enemy much closer to home as well. Plus personal struggles that Connor must face. There's a lot going on in this book that only spans five days!

I also wanted to address the fallout and ramifications from the undercover mission in Broken Soldier, to tie both books in together, giving my previous readers "easter eggs" so to speak, and hopefully enticing new readers to pick up Book 1 to see how it all began.

What can readers expect when they read a story from you? What would you like readers to know about your writing style?

Well-rounded characters with faults and flaws. And in-depth research. Since my tag line is "Men in uniform…and out" I do a lot of research (much of it hands on) to make my police officers, firemen, paramedics, and now soldiers, come alive and be authentic.

And until this new series I would have also said "Hearts and flowers romance with a bit of angst thrown in for good measure".

But that statement changed pretty drastically with both Broken Soldier and Rogue Soldier. I believe in challenging myself as a writer and taking chances. And that's what I've done here with my Shadow Unit series. These books are dark and gritty, more romantic suspense than contemporary romance. I want people to constantly wonder if Connor and/or Shawn will survive to the end of the book.

It's a big change for me, and I hope that my regular readers will give this series a chance. Because even though it's not my usual style, I am, and always will be, the Queen of Happy Endings. I will put my boys through hell, but love and dedication will always put them back together again. So give it a try! You just might like it!

How long does it take you to write a book?

Usually a couple of months. I have a regular full time job and my writing time is very limited to just an hour or two each morning. And I'm also a big time plotter. My outlines are extensive, like pages long. So that takes up a good chunk of time before I even write the first word of the book. But then because I have done such detailed outlines, the writing of the actual book flows pretty easily after that.

Despite the fact that you do extensive plotting and outlines, do your characters still sometimes take over and send the story in a different direction?

Usually not with major plot points, but with dialogue for sure. I had an idea in my head how the conversation(s) would go and suddenly my guys are taking things in another direction. And it's usually for the better! Rule of thumb - always listen to your characters. :-)

Jamie Lynn Miller has been writing fiction since childhood and decided to take the plunge and go pro in 2008, finding to her amazement that people truly enjoyed her love stories. She’s a romantic at heart, and her tales reflect the desire we all have to find “the one,” persevering through trials and heartache for that happy ending.

Jamie has a degree in fine arts and has spent the last twenty years working as a graphic designer, though she’d much rather be writing. She was born in Chicago and still lives there today with her husband and their two furry, four-footed children, er… cats.

If she’s not brainstorming story ideas, you can find Jamie at a sci-fi convention, in front of a furnace doing glass blowing, or on a mat twisted into a yoga pose.

Leave me a comment (AND YOUR EMAIL ADDRESS) for your chance to win a FREE copy of any of my backlist books! Contest ends Friday, September 30th.