Blogtour: The Harbinger by Keegan Kennedy 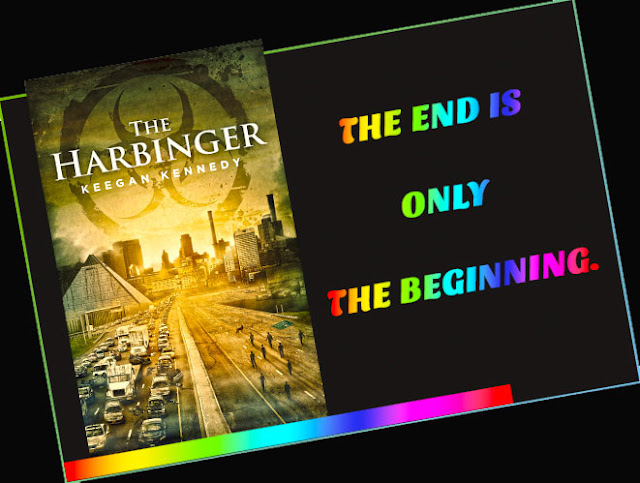 The Harbinger was born, in part, from growing up in the 1980's. At that time, our culture was plagued by fear. It was everywhere--on the news, in conversations, in nightmares... As I think back, nuclear war was often presented by the media as a likely event. In retrospect, I now see it for what it was... Reagan-Era propaganda that was meant to keep everyone scared shitless. Unfortunately, things haven't changed too much... But it wasn't just the media. Every other movie out there, it seemed, were full of slashers and killers, wars and disasters, and the end of the world. My favorites of these movies were always the huge Hollywood disaster flicks with fabulous all-star casts. Gloom and doom and the fantasy of starting over are common themes that endlessly fascinate us. And, of course, we're still in the grips of our zombie obsession.

My background is in gay romance and erotica. As a fan of post-apocalyptic and Sci-Fi fiction, I've noticed the glaring absence of major gay characters. Usually, they're resigned to be comic sidekicks, minor characters with occasional one-liners, or characters unable to defend themselves. Two of the four major characters in The Harbinger are gay and are portrayed in a realistic light, as flawed people who are just like anyone else--fighting to survive. Of course, there are some zombie-type creatures, but my "creepers" aren't like anything I've read before. It would be incorrect to categorize this as a "gay" or "zombie" book because there's much more going on... I wanted to express a different point of view that is lacking in most post-apocalyptic books. Instead of jumping into the middle of the story and telling how the world fell apart in a flashback, lasting for maybe a page and a half, which is fine for some writers and fans, I wanted to do something different. I wanted to examine and watch the world fall apart through the eyes of the characters and attempt to convey the emotions they experience. So The Harbinger begins with these characters living their lives with their own sets of issues and problems. Before they know it, their worlds have been annihilated and they face these extraordinary circumstances.

It starts as a whisper, barely audible.

Like lightning, the plague moves across the globe, spreading out in all directions. When the naysayers can no longer ignore the wails and moans of the dying, the Harbinger will already have them by their throats.

But the end is only the beginning…

Discovered in the Alaskan permafrost, the ancient virus was reanimated and genetically-altered. The new strain showed great promise in curing many of mankind’s afflictions. When the specimen fell into the hands of the Russian theocracy, their inept scientists attempted to create a biological weapon—a weapon that outsmarted them.

Now, the androvirus is a deadly airborne plague, conquering the world in a matter of days. With a communicability of 100% and a mortality rate of over 90%, there is no immunity. For the survivors, who can suppress the virus, there is only change. A few adapt, but most become walking, talking gray horrors with an appetite for flesh.

Primarily set in the American city of Memphis, four loosely-connected strangers, caught up in their lives, find their worlds annihilated by the swiftly-moving plague.
Alex Connelly is a wealthy, young executive, living an idyllic life with his pregnant wife, Madison. Kirk Foster is a self-absorbed aging gay man, desperate to hang onto his youth and sex appeal. Meredith Brinkley’s on-going war with breast cancer takes a turn for the worse, and she faces an impending double mastectomy. Logan King is a closeted baseball jock, playing for a minor league team while coming to terms with his true identity. And only together will they survive...


“Out of the people who survived this plague, I’ve noticed—and I think y’all have noticed too—there are a lot more of them than us. Combined we’ve seen hundreds of creepers, but so far, there are only four of us.”
“That’s not good,” Logan agreed, contemplating all of it. “Did y’all see a group larger than the one that was coming at us earlier?”
Standing in front of the counter, Simon was loading bullets into his pistol’s magazine. “Yeah, before I ran into Nina and Katie, I saw a huge group migrating down Danny Thomas Boulevard—had to be forty to fifty of ‘em… From what I’ve seen, they start off alone, but they band together, whispering and hissing words at each other.”
“I hate how they talk and the disgusting things they say, like: I eat skin or I smell your blood.” Katie shook her head. “It’s disturbing.”
“If there’s just one or two of them, they’re easy to deal with, but you saw that group coming for us when they heard the gunshot,” Nina said.
Logan nodded. “How long have y’all been traveling together?”
“Since this morning,” Nina replied. “I ran into Simon when I went to look for other people. Then we ran into Katie.”
“Where is it you’re trying to get to?” asked Logan.
“A safe place,” Simon said. “About a mile or so away is my old precinct on Peabody Place. We’re gonna check it out and see if it’s secure.”
“And hopefully, we’ll run into some government people or someone who knows more about what’s going on,” Nina added.
“What about you?” the police officer asked Logan.
“Well, my family lives in Missouri,” he began. “I was gonna try to go there to check on my folks, but they blew up the bridges.”
“Wait, did you see what happened to the bridges?!” Katie asked.
“Yeah,” Logan revealed, “the bridges were blocked with cars, so people were trying to cross from Memphis to Arkansas on foot. There were gunshots, and then helicopters fired these missiles.” His voice trailed off for a moment. “Those assholes in the helicopters just blew up the bridges with hundreds of people on them, maybe over a thousand.” He shook his head. “They killed all of them – just killed ‘em… like dogs. It made my blood run cold.”
“Who did it?! Who blew up the bridges?!” Nina asked, anger flashing across her face.
“I don’t know for sure, but the helicopters came from the Arkansas side of the river,” Logan replied. “If I had to guess, I’d say they were Army or National Guard.”
“Jesus!” Simon exclaimed. “Why does this not surprise me?”
“Did any of y’all talk to people out of town?” asked Logan. “They said on the news that this flu was everywhere, but I’m holding out hope that my folks are okay.”
“I talked to my mother before the phones went out,” Nina said sadly. “She said the sickness was in San Antonio.”
Katie nodded. “Before the phones went down, I talked to my mother in New Orleans and my friend, Camille, in Oregon. There were people sick there too.”
“Hold up!” Simon interjected, his eyes fixing on Logan. “What did they say on the news?” 10 Things I Want to Do Before I Die

Being an indie author can be wonderful and terribly challenging.

Both have came at different times.

I actively challenge stereotypes of women, racial minorities, and gay people. One of the toughest characters turns out to be gay. Also, The Harbinger highlights the incredible diversity of the city of Memphis.

I’m starting a new series about two men, who aren’t completely likable, who are star-crossed lovers. I wanted to challenge the romance novel genre—one that i truly love. At this time, I can’t use the character names or the title of the series as sometimes, the name of the work and the characters have been known to suddenly turn up in a hastily written project. I’ve found as an indie author that the element of surprise is paramount.

Originally hailing from Mississippi, Keegan Kennedy is a writer based out of Memphis, TN. He has a knack for uncovering love and romance in the darkest of places. With a tendency toward the melodramatic, he does more than arouse or excite the reader - he engages them.


Author of Homecoming: International Number One in four countries: The United States, The United Kingdom, Germany and Canada. (2013) Other chart number ones: The Substitute Wife, Magnificent Pretense, Captivated, Ganymede 4, West Texas Rivalry, and the Ties that Bind.