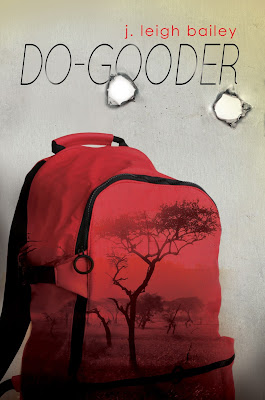 No good deed goes unpunished, and for seventeen-year-old Isaiah Martin, that’s certainly the case. The gun he was caught with wasn’t even his, for God’s sake. He only had it to keep a friend from doing something stupid. No one wants to hear it, though, and Isaiah is banished—or so it seems to him—to live with his missionary father in politically conflicted Cameroon, Africa.

However, when he arrives, his father is so busy doing his good deeds that he sends Henry, the young, surprisingly hot do-gooder with a mysterious past, to pick up Isaiah and keep him out of trouble. Even while Isaiah is counting down the days until he can go home, he and Henry get caught in the political unrest of the region. Kidnapped by militant forces, the two have to work together to survive until they are rescued—unless they manage to find a way to save each other first.


I headed back to the vehicle but stopped at the last second when Henry squatted to tie his boots. I wasn’t really prepared to stop so suddenly, and I tilted forward, windmilling my arms to keep from falling on top of him. In the process I knocked the insulin monitor off my belt. It landed in the bushes. I hissed at the stinging pain when gravity and the weight of the monitor pulled the pump’s needle and tubing out of my side.
“Damn it.” I crouched down next to Henry and tried to find the monitor in the bushes in front of him. I caught the glint of blue plastic and reached for it.
“Stop!” Henry lurched next to me and covered my hand with his.
“What the…?”
It happened too quickly to stop. The snake struck, scoring Henry’s hand—the hand covering mine—with wicked sharp fangs. The long greenish-gray snake hissed, and I dove backward, pulling Henry along with me.
“Are you okay?” Not the smartest thing to ask, probably. After all, the dude just got bit by a snake. It was all my panicked brain could come up with, though.
Henry stared down at his hand, eyes wide, face pale. His breathing started to speed up, but he didn’t say anything.
Crap. I shook his shoulder. “Henry. Is it poisonous?” When he didn’t answer, I grabbed his face between my hands and forced him to look at me. “Is it poisonous? What do we need to do?”
“Green bush viper.” The words were soft, almost wondering.
“What does that mean? Come on, Henry. I need you to tell me what to do. I’m freaking out a bit, and I really need you to tell me if it’s poisonous and how to handle it.” His wide eyes focused on me, and I could tell he was making the effort to slow his breathing. “It’s poisonous. Get the snakebite kit. It’s behind the driver’s-side seat in the big first-aid kit.”
I jumped up and ran to the Range Rover. It took me a couple of tries to get the door open. When I did, I pushed the seat forward and tried to find something that looked like a first-aid kit. There were a couple of emergency packs, and I couldn’t quite focus. Then I saw the big red cross on the blue canvas bag and wanted to curse myself. Duh.
I dashed back to Henry. He looked calm, calmer than I was, in fact. He was positively Zen, sitting there, quiet and still.
“Should we move you to the truck?” I asked, even as I kneeled beside him. “I mean, what if it comes after you?”
“It won’t. It’s more scared of us than we are of it,” he said.
Yeah, somehow I doubted that.
“Besides,” he added, voice serene. “Movement is a bad thing. The more I move, the faster my heart beats, the faster the venom moves through my veins.”
Henry’s weird tranquility was starting to seriously freak me out. And I was already pretty freaked because, as a word, venom was way scarier than poisonous. Poisonous made me think of itching and welts, maybe vomiting. Venom—well, venom just screamed deadly.


What do you like to do when you travel? What are the “must do” items on your agenda?

*Commenters will be entered to win a grand prize basket that includes an African cookbook by Marcus Samuelsson, a children’s African folk tale picture book, a field guide to African animals, and some fun swag.*

j. leigh bailey is an office drone by day and the author of Young Adult and New Adult LGBT Romance by night. She can usually be found with her nose in a book or pressed up against her computer monitor. A book-a-day reading habit sometimes gets in the way of... well, everything...but some habits aren't worth breaking. She's been reading romance novels since she was ten years old. The last twenty years or so have not changed her voracious appetite for stories of romance, relationships and achieving that vitally important Happy Ever After. She's a firm believer that everyone, no matter their gender, age, sexual orientation or paranormal affiliation deserves a happy ending.