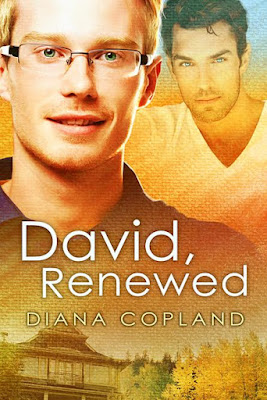 When David Snyder buys the old house he is reeling with heartbreak and looking for somewhere to call home. Unfortunately, the house has problems; electrical, plumbing, heating, things David knows nothing about. He’s an interior designer and can make a home beautiful, but repairs are beyond him. David contacts a handyman, even as he pictures an overweight guy sporting filthy worn jeans, displaying a butt crack. When Jackson Henry arrives in time to save David from accidentally burning his house to the ground, he finds he could not have been more wrong. Jackson, dark-haired, lean and handsome, is an expert in construction and repairs, and just what David needs.

David knows he shouldn’t be attracted to the soft spoken handyman. His last partner was unfaithful, and jumping into a new relationship is a recipe for disaster. His ex is creating trouble, and David’s car has been vandalized sitting in his driveway. But as David spends more time with Jackson, he finds himself falling -- hard. Is Jackson the love he’s hoped for? There’s only one way to know for sure, and that’s to try to trust what his heart is telling him in spite of the obstacles.

This was fabulous, y'all. I hope you've already ordered it.

Seriously, though, this book is near perfect, with a fantastic cast, two utterly lovable MCs, great moms, a snarky assistant who needs his own book, and a tender and oh-so-sweet romance.

The plot is fairly straight-forward:

After breaking up with an abusive boyfriend, David Snyder, who works as an Interior Designer, is looking for a new place to live and on impulse buys a house he falls in love with. The abusive ex has kept everything, including the condo David pays for, all the furnishings, and even the Keurig.

Soon after closing on the house, David regrets not insisting on a home inspection when the house he fell for turns out to be more like a money pit. Interior Design hasn't prepared him for leaking roofs, bad electrical wiring, bad plumbing, and a myriad of other issues.

David's mom hands him a business card for a handyman. Jackson Henry is nothing like what David expected.

Cue massive UST. The attraction is immediate, but of course David is still licking his wounds, and while Jackson is interested, he's also working for the guy, so nothing much happens other than glances and errand thoughts. So while Jackson fixes up David's house, the mating dance begins.

There is very little drama in this book as far as the relationship between the two men is concerned. As their dance continues, they fall more and more, and their relationship is exactly what one would expect - full of mutual respect, comfort, and helping each other. When Jackson's mom is hospitalized, David is right there, lending a hand, keeping Jackson propped up. And Jackson does the same for David.

Jackson has a bunch of awesome friends, who also become David's friends, and David has a fabulous assistant, who needs his own book. This being set in a small town, there's also some homophobia inside, not within Jackson's inner circle, but from people living in the town, who'd rather not hire someone who's gay. Because, you know, gay cooties could rub off. Morons.

The only real drama is with Jackson's siblings (for whom I had no use, and I wish Jackson wouldn't either), and David's ex, Trevor, asshole first class. The latter was perhaps slightly OTT, but whatever. This is me not caring about that, because it helped to really show how well David and Jackson fit together.

This novel is by design low steam and slow burn, but I appreciated that more than I would have appreciated David and Jackson falling into bed together at first sight. When they do finally get it on, they burn up the sheets. Their emotional connection translated into some really hot passion, and oh my... yeah, that was awesome.

Wonderfully engaging writing style, with fantastic dialogue, excellent pacing, some comic relief - this was as close to perfect as possible.

I very much enjoyed reading this, and while this may have been my first book by this author, it won't be my last. And I'm definitely hoping that there will be a sequel to this one. Soon.

Hello, all!!
Well first I’d like to thank Sandra for the lovely review of David, Renewed. It made my day! It also gave me the idea for this post!
Several people have said they think my main characters, David and Jackson, have friends who need to have books of their own. Gil, Vernon, Manny. And Michael, David’s hipster, snarky best friend. So, for the first time anywhere, here is an excerpt from Michael, Reinvented!!

Michael Crane flipped up the collar of his coat as he walked briskly down the sidewalk, black leather half boots clicking on the concrete, Justin Timberlake’s ‘Can’t Stop the Feeling’ flowing into his ears from his ear buds. He liked the song, and found it helped him to keep up a steady pace as he walked the several blocks of crowded downtown corridor to the high rise building that housed his employer, A.F. Interiors. The cold seemed to seep through his coat, the wind lifting the front of his medium brown hair and slipping under the coils of the heavy dark blue scarf around his neck.

I hope you’ve enjoyed this glimpse into Michael, Reinvented. Go to the Dreamspinner Press home page and register, (just click on the little person icon and it will take you right to the right spot) then leave a comment on this post for a chance to win the first book in the series, David, Renewed!
Cheers!

Diana Copland began writing in the seventh grade, when she shamelessly combined elements of Jane Eyre and Dark Shadows to produce an overwrought Gothic tale that earned her an A- in creative writing, thanks entirely to the generosity of an indulgent teacher. She wrote for pure enjoyment for the next three decades before discovering LiveJournal and a wonderful group of supportive fanfiction writers who encouraged her to try her hand at original gay fiction. Born and raised in southern California, Diana moved to the Pacific Northwest after losing a beloved spouse to AIDS in 1995. She lives in eastern Washington with four horribly spoiled cats, near her two wonderful adult children who swear she doesn't embarrass them. She thinks they're so cute.