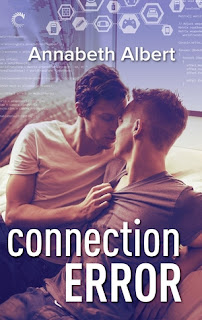 
It's typical of video game programmer Josiah Simmons to be the last one on the plane on the way to the biggest meeting of his career. Though he's (mostly) coping with his ADHD, he can't handle another distraction. But he also can't ignore his rugged seatmate—especially once he learns the military man's a fan of his game.

Ryan Orson refuses to let his severe injuries pause his career as a navy SEAL. He's got hours of grueling physical therapy ahead of him, and no time for anything that might get in the way of his return to active duty. But that doesn't mean he's above a little first-class flirtation with geeky-cute Josiah.

When a delay strands the pair in St. Louis, they agree to share a hotel room and a night of gaming. Neither expects their new connection to move to the next level in the light of day. Opposites may attract, but is this game over before it's even begun?

Connection Error is much angstier than the previous two books in the series. If you like hurt/comfort stories, you'll love this book, but be aware that the focus is much more on the hurt than comfort.

Ryan is a Navy SEAL who was injured on his last mission. He is determined to return to active duty and is flying to Washington DC for full-time rehab when he meets the hyperactive Josiah on a flight.

Josiah flirts with Ryan shamelessly. He ogles Ryan's biceps and basically trips over his tongue in an effort to draw Ryan into a conversation. Things get easier when Josiah realizes Ryan is a gamer and a fan of the game Josiah's developing. Josiah asks Ryan all kinds of questions about the military to make that aspect of the game more realistic.

And then the plane lands due to severe winter weather, and Josiah says something really hurtful and stupid. I was seriously aghast! Damn Josiah's lack of filter and impulse control.

Josiah is immediately contrite, and Ryan can't bring himself to leave Josiah stranded at the airport, so the two end up sharing a hotel room overnight. They form a tentative friendship that initially feels fairly one-sided.

Josiah is all into Ryan. He want to lick him all over and do the whole long-distance thing. But Ryan is hurting. He's defensive and closed off. Ryan doesn't do feelings. He's still hung up on his last relationship, which ended abruptly (I was never clear as to whether the breakup was due to Ryan's injuries or if it happened prior to Ryan's failed mission).

I love that the MCs in this book aren't perfect. Josiah has severe ADHD and still lives with his mom because he has a hard time adulting. He's been promoted to a leadership position at work, but he can't control his team.

And Ryan. Oh, God, Ryan. He had my heart from the word go. I didn't pity him. I admired him.

Annabeth Albert is sensitive to issues veterans face and pulls no punches in showing the pain and disappointment Ryan endures. Ryan is used to being the alpha; he's strong and stoic. He doesn't wallow in misery, but his injuries are severe. (The extent of Ryan's injuries is revealed in the second chapter at 7 percent. It's a powerful moment in the story, and I'm glad that I went into the book blindly.)


Ryan and Josiah's relationship progresses slowly. They are apart throughout most of the book, so much of the relationship development happens via emails, texts, and IMs. Josiah isn't Ryan's type, until he becomes Ryan's everything.

Feeling like he's lost his purpose in life, Ryan decides he wants to take care of Josiah. After all, Ryan is structured and organized, not to mention a decade Josiah's senior. Plus, if he's helping Josiah, he doesn't have to deal with his own grief.

But Josiah doesn't want to be anyone's project. He wants a boyfriend, not a caretaker.

Josiah needs to learn to stand up for himself, and I was so proud of him at the end. He was totally in the right to call Ryan on his bullshit.

The epilogue was very much needed here, and it put a happy smile on my face.

Oh, and I adored Gracie, Josiah's white lab puppy. (My white lab Magnum is the love of my life, and I have a soft spot for dogs in general. Seriously, if you don't like dogs, get outta my house. Like literally get out. I have three, and they don't take kindly to being dissed.)

Connection Error can definitely be read as a standalone. The couples from the first two books play a small role and serve more as fillers (we don't really see them interact). Speaking of secondary characters, both Josiah and Ryan's mom are awesome, supportive but not overwhelmingly so.

I venture to say there will be another book in this series (there are some hints in the epilogue), and I'll be first in line to read it.

"Thought you didn't cuddle." Jos snuggled in against Ryan's side.

"I do for you," Ryan said seriously. "Not much I wouldn't do for you."