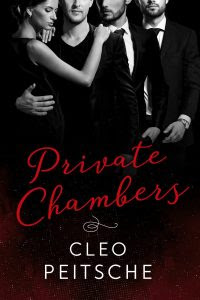 Maisie’s dominant bosses won’t budge: for her protection, she must marry one of them immediately.

On paper, they’re perfect. Ethan Brennbach, Trent Banno, and Raphael Lattimore are rich, gorgeous lawyers. The powerful billionaires give Maisie exactly what she needs, from every angle imaginable.

But after overhearing them arguing, she knows the devastating truth.

They don’t want her, not forever.

Unable to tell them the truth, soon she’s acting out. But her bosses have their own carefully laid plans.

They will bring Maisie under control, one way or another…

Maisie whirled through the empty conference room, gathering abandoned coffee mugs, crumpled, dirty napkins, and fallen chunks of glazed cinnamon rolls. Last night’s manicure was already chipped—not that pink fingernails did much to offset the ugliness of her janitorial uniform.

She made a second pass to collect the newspapers. As she was dumping them into the recycling bin on her cleaning cart, a word caught her eye.

She glanced around, but she was still alone in the bright room. Her arm snaked out for the paper. Fire Destroys Murdered Man’s Mansion—Norman Ballystock’s New Home Goes Up in Flames!

There was a photo, a mess of charred timber marring a meticulous stretch of landscape.

Holding her breath, Maisie skimmed the article, irrationally terrified that her name would appear. It didn’t, of course.

She could think of three people who were capable of arson, or at least arranging it. Ethan Brennbach, Trent Banno, and Raphael Lattimore. Her former bosses. Her dominant lovers.

The men who were insisting she marry one of them—and she wouldn’t even get to choose which one.

They had promised to make the Ballystock problem go away. Was the fire their work? If so, why?


Those men never did anything without a damned good reason.

A cold feeling churned in the pit of Maisie’s stomach. She shoved the newspaper into the cart and wheeled it into the hall.

It was lunchtime, and she needed to get some air. 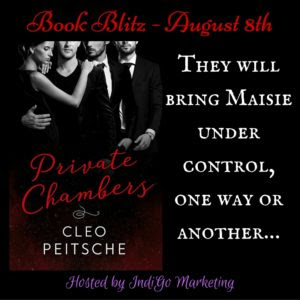 If Cleo isn’t writing (or reading!) erotica, she’s probably sitting on her balcony, watching the wind blow through the trees. She loves horses, snowstorms, and piña coladas. If she won the lottery, she would hire an assistant to take care of the technical side of e-publishing so that she could write all day.