Hi, I’m S.C. Wynne and I write M/M romance with a little humor and generally a healthy serving of angst. Welcome to my blog tour for Starting New!

For the next week I’ll share some posts about writing and my story Starting New. Join in the fun by leaving comments and enter to win a $30 Riptide gift card! 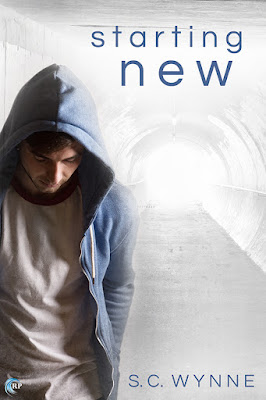 Life hasn’t been good to Francis Murphy. He’s survived twenty-one years of homelessness by hooking and taking handouts where he can find them. When the local shelter is vandalized, he’s forced to seek food at the Grace and Light Church, where he runs into the pastor’s son, Randy.

Randy Wright believes the best in others. He's immediately drawn to Francis, even though Francis is hardened and wary. When Francis is attacked by one of his johns, Randy and his family take him in and offer him temporary work. Randy always thought he was straight, but something about Francis has him yearning for more than just friendship, and realizing he might be bisexual.

Francis is attracted to Randy too, and Randy and his parents say they’ve always believed in gay rights. But talk is cheap. What are the odds that these Christian parents will remain open-minded when it's their own son in a relationship with another man?

S.C. Wynne started writing m/m in 2013 and did look back once. She wanted to say that because it seems everyone's bio says they never looked back and, well, S.C. Wynne is all about the joke. She loves writing m/m, and her characters are usually a little jaded, funny, and ultimately redeemed through love.

S.C loves red wine, margaritas, and Seven and Sevens. Yes, apparently she is incredibly thirsty. She loves the rain and should really live in Seattle, but instead has landed in sunny, sunny, unbelievably sunny California. Writing is the best profession she could have chosen because she's a little bit of a control freak. To sit in her pajamas all day and pound the keys of her laptop, controlling the every thought and emotion of the characters she invents, is a dream come true.

To celebrate the release of Starting New, S.C. is giving away $30 in Riptide credit. Leave a comment with your contact info to enter the contest. Entries close at midnight, Eastern time, on August 13, 2016. Contest is NOT restricted to U.S. entries. Thanks for following the tour, and don’t forget to leave your contact info!