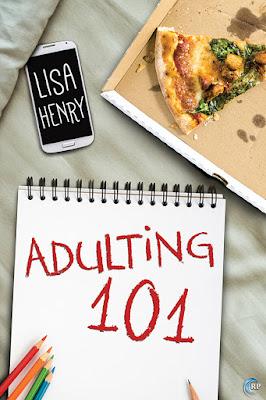 The struggle is real.

Nick Stahlnecker is eighteen and not ready to grow up yet. He has a summer job, a case of existential panic, and a hopeless crush on the unattainable Jai Hazenbrook. Except how do you know that your coworker’s unattainable unless you ask to blow him in the porta-potty?

That’s probably not what Dad meant when he said Nick should act more like an adult.

Twenty-five-year-old Jai is back in his hometown of Franklin, Ohio, just long enough to earn the money to get the hell out again. His long-term goal of seeing more of the world is worth the short-term pain of living in his mother’s basement, but only barely.

Meeting Nick doesn’t fit in with Jai’s plans at all, but, as Jai soon learns, you don’t have to travel halfway around the world to have the adventure of a lifetime.

This is not a summer romance. This is a summer friendship-with-benefits. It’s got pizza with disgusting toppings, Netflix and chill, and accidental exhibitionism. That’s all. There are no feelings here. None. Shut up.

Each comment on this blog tour enters you for a chance to win a $20 Riptide credit and an ebook of your choice from my back catalogue. You’ll also win a super secret cute little gift that’s very close to my (and Nick’s) heart! Entries close August 20, and contest is not restricted to US residents. Remember to leave your email address in the comments so I can contact you if you win!