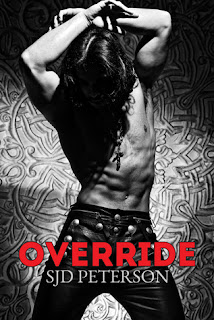 At over six feet, with a body honed in the gym, auto worker Donavan Gregory is used to people assuming he’s a dominant top. Unfortunately, they’re wrong, and Donavan’s desire to explore his submissive side goes unfulfilled.

If you like stories that are high on sweetness and low on angst with an extra dose of naughty, Override is the book for you. I am a fluffaholic; I don't need angst to be happy (just the opposite, in fact). I adored the first two-third of this book, but I got a little restless toward the end.

Donavan craves to submit, but at 6 foot something and over 200 pounds, he doesn't feel like a sub. Then he meets a man at Pride who throws his world out of alignment. Seth is much smaller than Donavan, but he's all Dom. He likes to take charge and be in control, and Donavan melts at Seth's touch.

Donavan's POV filters the majority of the story (we get a few scenes from Seth's perspective), and he's a well-rounded character. Donavan is seven years younger than Seth and works at a factory. He doesn't have a college degree, nor does he make a lot of money.

Seth, on the other hand, is all white collar. He's a doctor who drives a fancy car and spends more on one meal than Seth makes in a day. Donavan feels insecure at times, wondering what Seth sees in him, but Seth makes it very clear that Donavan is a gift he wants to keep.


Seth is a nice guy, but I didn't fully get him as a person. He's an Ob/Gyn, yet he never talks about his job, never seems to be on call. We get a good sense of what Donavan does for work (we even see him interact with his douche of a boss), but Seth feels like he's high on a pedestal somewhere.

I liked Donavan's best friend Cain, who's hilarious and far too interested in Donavan's sex life for a straight boy. The last couple chapters played up a few secondary characters, including Cain and Seth's cousin Tristan, as potential MCs in the series (an excerpt for book 2 is included, and it seems darker and angstier than this story).

The ending is a totes feel-good HEA. I would have preferred more tension or a conflict of some kind, but I'm not going to complain too much. The sexy times were smoldering, and I'm a fan of SJD Peterson's writing style. Definitely recommended for fans of BDSM-lite who prefer a less intense read.

I do believe something very magical can happen when you read a good book.