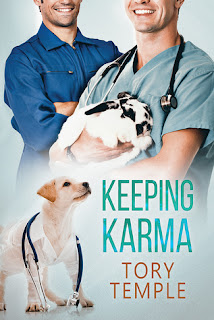 
Alex Myers is keeping deeper secrets than just his pet ferret, Karma, who is illegal in California. Both Alex and his twin sister, Tabitha, can “hear” the thoughts of animals. It’s an ability he puts to good use working at an emergency animal clinic while studying to become a veterinarian.

One night, local animal-control officer Dylan Travers comes into the clinic with an injured fawn, and it doesn’t take the two men long to act on their mutual attraction. But the closer they become, the harder it is for Alex to keep Karma and the rest of his menagerie from Dylan. And then there’s the matter of his ability…. Will Dylan even believe him if he tries to explain?

Add to that debilitating migraines from especially “loud” animals and a scheming coworker threatening the clinic, and Alex needs Dylan’s support more than ever. Alex just wants to keep his job, his pets, his lover, and his sanity. But he can’t do it alone.

I read the second edition of this book. There is no mention of this story having been revised, and based on some dated details (references to an MP3 player and two men not being able to get married, for example), I can say with some certainty that it wasn't.

And, really, that's too bad. This story is CUTE (that seems to be the best word for it) and plenty STEAMY (there may be too much sex, but you didn't hear it from me). But it lacks substance and oomph.

Alex and Dylan move in together halfway through the book. We get only Alex's POV, so Dylan, an animal control officer, is just this super nice guy with no flaws. There is almost no relationship conflict, except Dylan doesn't believe Alex can hear animals' thoughts, and that issue is never resolved.

The book doesn't end as much as stop. Dylan still seems sceptical of Alex's claim, and the MCs have grown apart. Maybe the author is planning a sequel?

That got old. Fast.

The villain and his evil plot were laughable. There was no motive, so the whole thing felt like a farce.

This story has potential, but as it stands, the best I can say is it's an easy, sexy read; no thinking required. Extra half star for Karma the ferret and fat, grumpy cat Macavity.