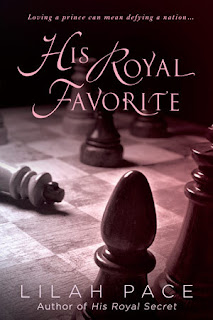 James, Prince of Wales, is making history. He's decided to come out to his subjects—and the world. However, telling the truth means exposing his relationship with lone-wolf reporter Benjamin Dahan. Although Ben never wanted commitment, the unexpected depth of his feelings leads him to join James in the media's harsh spotlight.

When the news story explodes across the globe, Ben can endure the mockery and dirty jokes. But after his tragic past is cruelly revealed, his life begins to implode. Can even his love for James be worth this?

James has it no easier. His revelation divides the country and sparks turmoil within the royal family. He must struggle to defend not only himself and Ben, but also his younger sister, who hovers on the brink of a breakdown that could endanger her life.

Is Ben strong enough to survive the onslaught and stand by James' side? And will James have to make a choice between Ben and the crown?

His Royal Favorite is much angstier than the first book, His Royal Secret, which ends with Ben deciding he wants to stay with James and try, really try, to make the relationship work.

But James is still the Prince Regent, and Ben his "boy toy" (as one particularly vicious paparazzo calls him).

Ben has lived his life as a nomad. He's independent and self-reliant. James warns Ben of the media shitstorm about to come down upon them, but Ben doesn't fully grasp how much his life will change until it does.

The first half of the book about killed me. Nothing is easy for the MCs, not for James, whose sister is still self-harming and whose Uncle Richard tries his hardest to make sure the Church of England will ask James to step down as future king; and not for Ben, whom the paparazzi hunt with cruel intent (even his parents' horrific deaths are dredged up and sensationalized) and whose colleagues are more titillated by his relationship with the prince than his reporting skills.

All relationships require work and commitment, but these two have more to overcome than most. James tries so hard to make Ben comfortable, but Ben feels owned and stripped bare.

The constant tension was heartbreaking, but fortunately both men are mature adults and attempt to talk through their problems (there's no big misunderstanding, no miscommunication—just sweat, tears, and heartache).

The author treats mental health issues with sensitivity. James's sister Indigo needs help, more help than he can give her. When Indigo's world collapses, it's Ben who's there for James, Ben who pushes James to do the right thing, the only thing.


What it comes down to is this: Can James give up his future as king, his birthright, to be with Ben? And can Ben give up his job and privacy to be with James?

Following pain, anger, betrayal, and jealousy, the men hit rock bottom around 50 percent, but by 60 percent there is a glimmer of hope: a kiss on a mountain, a determined Lady Cassandra, a rather interesting chat with the queen, a visit to a gay club (oh, yes!), and the Best Headline of All Time (according to James anyway) .

"Freedom would be you coming here all alone, cruising the room, picking up any one of the countless guys in here who're already hard just thinking about you."

[Ben] said it mostly to get James turned on, but James's eyes widened as he shook his head.

"No. Not without you. Being without you wasn't freedom. Loving you is what sets me free."


I loved the dual POV and the true emotional connection between the MCs. This book is less steamy than the first book, which was a bit of a letdown. There is one particularly intense scene that's interrupted and not revisited again on page.

But the HEA ... the HEA is everything! The last chapter is an extended epilogue, a montage of sorts. It's perfect, and I could finally breathe.

Despite (or maybe because of) the angst and struggle, I loved this book and was deeply invested in the MCs and their relationship. This book cannot be read as a standalone, but I highly recommend this two-part series.

Sleep is good, he said, and books are better.