ARC Review: Don't Twunk With My Heart (Loving You 2) by Renae Kaye 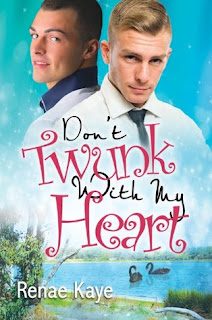 
Kee Smith isn’t sure who he is anymore. He knows who he used to be—the ignored gay son who chose a blue-collar job just because no one expected it, the submissive bottom who enjoyed large, masculine jocks who put him in his place, the sleek, fashionable twink who partied all night. But after his ex-boyfriend hit Kee and called him names, Kee retired from the social scene.

Back after a year’s hiatus, Kee still doesn’t know where he fits. His friends say he’s a twunk—a twink who put on muscle and turned into a hunk—but Kee is searching for somewhere to belong. Instead of going back to his usual type, Kee hooks up with twink Tate Stevens—a fashion-industry professional who works the image hard. It proves to be the best decision he’s ever made, and not just because he’s starting to regain his sexual confidence.

With Tate, Kee can open up about his fears and confusion without ridicule. Tate has his own fears about putting on weight and getting old. It will take work to make a relationship of opposites succeed, but they begin to realize the compromises will be worth it if they can be together.

This is very much my kind of story: uncomplicated, sweet, and fluffy for days; low on the angst, high on the humor, with a great cast of secondary characters, including Jay and Liam!

Don't Twunk With My Heart can be read as a standalone, but you'll appreciate Kee's friend Jay (Jamie to his friends) more if you read book one, Loving Jay, first. We get a lot of Jay and Liam here (not that I'm complaining, mind you).

Kee has been in hiding for a year. After his douche of an ex turned violent, Kee hasn't been in the mood for partying. He works hard as a welder, eats enough carbs to fuel his body, and likes to emulate Yanis Marshall moves (high heels and all).

Kee lucks out when his first night out with friends he meets a hot guy wearing all white and rocking the dance floor. The two engage in an impromptu dance-off, and they both win big that night. Luckily, the morning after is all kisses and jokes, with no awkwardness to be found.

The hot guy turns out to be Tate, a marketing guru for a high-end fashion line. Tate is a twink past his prime (not that you'd know it by looking at him) and self-conscious about his weight and age. He doesn't eat gluten or fats or anything really.

This worries Kee, who used to be a skinny, hungry twink but is now a twunk (a twink who put on muscle and turned into a hunk). Hey, don't look at me; the terminology is all Jay.


There is no relationship angst in the story. The men hang out and watch football (Tate is only slightly more interested in the game than Jay who considers any ball that goes high a "good kick"), and Kee allows Tate to dress him up in fancy clothes, which he models without complaint (mostly). Oh, the sacrifices we make for our boyfriends!

When Kee falls ill, Tate takes care of him. Tate even knows how to handle Kee's clueless sister-in-law and high-on-drama mama. I loved the restaurant scene. Tate worked the hell out of what could have been an embarrassing evening.

There's plenty of steam, especially in the first half; indeed, Tate is a bit of an exhibitionist and likes to have sex in public places (it's the thrill of the game, the possibility of getting caught). The last scene in the woods is hella hot.

Some things are dealt with too easily: Tate's disordered eating, for example, or the way Kee gets over his abuse trauma. I wanted more tension, some conflict. But that's not what this book is about.

This is a feel-good story with a sunny HEA. There's nothing extraordinary about these MCs; they're just two guys, seemingly complete opposites, who fit together.

The bonus chapter from Jay's POV was awesome, as was the teaser for Vinny's story. I'll happily read more books in this series.