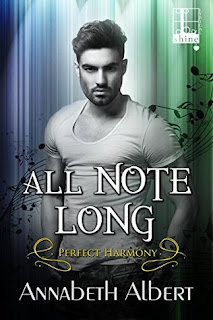 
Michelin Moses is a country music star on the rise. With a hit single under his Texas-sized belt buckle and a sold-out concert tour underway, his childhood dreams of making it big are finally coming true. But there’s one thing missing—a promise to his dying mother that he’d find it—him—when the time was right. With a little luck, he won’t have to wait too long . . .

Lucky Ramirez is a hunky boy toy who dances at The Broom Closet, one of West Hollywood’s hottest gay bars. He loves what he does, and he’s good at it—almost as good as he is at playing dumb when he spots Michelin Moses at the bar. What happens next is off the charts—and keeps Michelin coming back for more. He’s just not sure it’s the right move for his career. But if Lucky gets his way, Michelin will get Lucky—and no matter how the media spins it, neither of them will be faking it .

I've been looking forward to Michelin's story for ages, but the Michelin I met in the previous books, the Michelin everyone sees, is an act, a mask he wears.

The real Michelin is lost and insecure. He's so deep in the closet, he needs a map to find his way out. He lets his label and publicist make all his decisions, and his only true friend is his stylist.

When Michelin is outed, he goes into full-on ostrich mode. His publicist decides the best way to handle the situation is to have Michelin pretend that he's dating Lucky, the go-go dancer he was caught kissing on camera.

Lucky is delicious and ten years Michelin's junior. Lucky loves to dance and goes after what he wants. He's proud of his body and not shy about showing it off. He's also fiercely independent, to a fault I would argue, and bristles when Michelin offers to pay him for pretending to be his boyfriend.

I love the fake boyfriend trope. It almost always leads to a long slow burn, and UST is my favorite! It's hot IRL, and it's HOTTER in fiction when two sexy men are involved.

These men have incredible chemistry. Michelin is not exactly experienced. He's demi-sexual, so he needs to be emotionally connected to someone to get turned on, and Lucky turns him on like no one else. Lucky figures out that Michelin needs honesty and praise to get off. Lucky loves giving orders, and Michelin loves take-charge Lucky.


Other reviewers have mentioned Michelin's doormat behavior, and they're not wrong. Even after he's outed, Michelin doesn't stand up for himself. He just wants to sing country, not be the face of a cause. And I understood that to some degree.

Michelin tries really hard to please Lucky, but Lucky is all brash and loud and stubborn about accepting help; he takes offense every time Michelin even mentions money.

While book 2 remains my favorite, I enjoyed Michelin and Lucky's story, which can be read as a standalone (the MCs from the first two books are mentioned but not present on page).

Annabeth Albert seamlessly includes Tweets at the beginning of each chapter to move the plot forward like she did in the other books, and those are really fun to read.

This story is romantic and sweet at its core. The sexy times are tender but sizzling too. Oh, and there's a dog named Lady and Lucky's boisterous Argentinian family and Michelin finally standing up for himself.

The last chapter is a perfect ending to this story of a country boy and a Latino firecracker who fall in love despite the odds stacked against them.

"You wrote a song? Another one for me?"

"Haven't you figured it out yet? They're all for you."

Sleep is good, he said, and books are better.